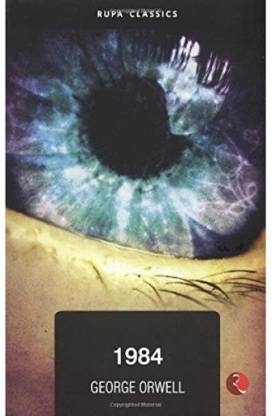 1984 A Novel is a dystopian vision of human society. The book has become a classic in literary political fiction.

Winston is a small cog in the wheel of the Party. It is a totalitarian regime where each individual’s every action at every moment is under constant observation. The leader of the Party is a mysterious figure, just known as Big Brother. And, it is said that the Big Brother is always watching.

Winston has become tired of the controlling ways of the Party. The departments of the government have names that are opposite to the functions they perform. The Ministry of Love deals with law and order, using torture as a vital weapon. The Ministry of Peace is in-charge of war. The Ministry of Truth, where Winston works, has the task of altering truth for propaganda, to twist facts to suit the needs of the Party.
Winston himself has a job of rewriting historical facts in a way that benefits the Party and its agenda. Recently, Winston has begun to record his thoughts against the party in a diary. This is a crime, even thinking thoughts against the party is a Thoughtcrime.

He manages to conceal his diary and carries on his work as usual. He falls in love with a co-worker named Julia, but even love and sex can be construed as crimes in this regime and they have to be careful about their relationship.

The Party has even begun to enforce the use of a new language called Newspeak, in which all words that refer to dissident thoughts and rebellion have been eliminated. The Party does not want even the language to present a means of expressing opposition to themselves.
In this scenario, Winston carries on his life, thinking about the dissident group called The Brotherhood, and wondering if he can join them. He soon gets an opportunity to meet its legendary leader, but the result is not what he expects.

1984 A Novel has come to represent totalitarian or controlling regimes, and many of the word and phrases used in the book like Big Brother, Thoughtcrime, Room 101 and Doublethink have all entered common usage in English since the book was published. Orwellian has now come to be associated with any regime that uses deception and constant monitoring to control its people.

George Orwell was an English author and journalist.

A Clergyman's Daughter, Coming Up for Air, Down and Out in Paris and London, and Animal Farm are some of his other books.

George Orwell was born in 1903. His original name was Eric Arthur Blair. He worked for a while as a policeman in Burma. Later, he returned to Europe and spent a few years living in London and in Paris, working as a journalist. He later also worked as a teacher and as an assistant at a small bookshop. His first novel, Burmese Days, was first published in the United States. He is considered one of the most influential writers of the twentieth century. 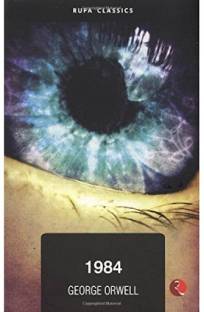 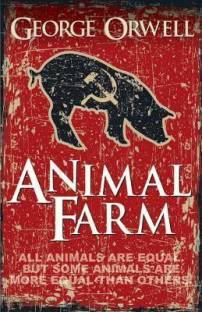 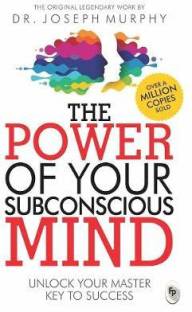 war is peace
Freedom is slavery
Ignorance is strength
A beautiful novel by George Orwell
We humans are gifted with most powerful mind but our human society develops on how we use it
As human is gifted with emotions like love and care we humans also have emotions like greed and hatred
This novels tells you all about it
It is story of of place known as Oceania which is under dictatorship in which Winston smith is a person who works in Government ministry but always hates the government but a...
READ MORE

An enlightening novel written in 1948 by George Orwell and telling a captivating tale on the perils of authoritarian governments. It also makes us think if we are unknowingly supporting any such Party, group or governments which would result in far reaching disastrous consequences.

Rupa publication has brought this book in best shape at great price. Pages are nice and print is error free and great to read. Highly recommended.
READ MORE

I must appriciatethat thedelivery boy is excellent. Well behaved. Its40 degree outside. But still he has a smile on his face. Thank you
READ MORE

Awesome book 😃😃😃😃 this book had such a powerful meaning and it took me on an emotional ride, a must read for everybody. Most possibly the best political fiction book I have ever read!
The novel creates a world so plausible, so complete that to read it is to experience another world

Anyone embarking on a political thriller should look to 1984 – to see how it's done.
READ MORE

Awesome purchase, proper printing and paper quality. Only bookmark is missing which should be compulsory. Book has really great feel and it's a must read as well. Highly recommended book.
READ MORE

Seller: Spectral
Publisher- FingerPrint
I am not going to write about the story- it can be found anywhere else.

Got the book at a discounted price.
The book arrived two days before the expected date. The packaging of the book is really worth mentioning. I never expected the packaging to be so unique! The book was packed into a hand-decorated paper package which looks very beautiful. I am quite impressed by the sellar Spectral for that.

But I didn't receive the bookmark which was a bit dis...
READ MORE

writing review before reading the book. this review is only for book lovers. I think that every book has something to offer, it might be small or large, but it also depends upon the reader of the book to enhance the experience with the book by adding or associating their own beliefs and thoughts.
don't read blindly, after completing few pages of any book think for a while that whether it suits you or it is not of your type. better to develop a habit of reading a para & writing four. it will ...
READ MORE

7
4
Permalink
Report Abuse
4
If Isaac Asimov was responsible for giving us the three laws of robotics then this book gives the 3 rules to a dystopian society. The book is a bit heavy specially in the later parts but gives you an insight about how governments and organisations would like to you to believe. There might be a disconnect with some of the descriptions of the scenes with the present times but still packs enough punch to make you wonder if what you know is true or not...
READ MORE

Received a fine product with readable font and decent quality pages within three days after ordering.
I haven't read the book yet. So no comments on its content.