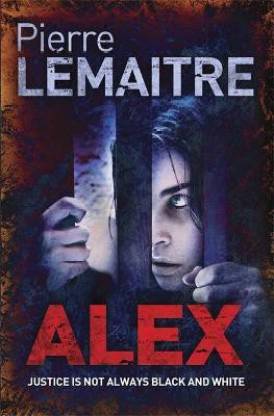 Alex, by Pierre Lemaitre, is a crime and suspense thriller featuring an enigmatic woman who is the victim of a brutal kidnapping, who nevertheless devises her own escape.

Alex Prevost is the protagonist of Lemaitre’s Alex. She is portrayed as a beautiful, resourceful, and intriguing heroine, who is always trying to change her appearance and identity. Unlike most crime stories, where there is a damsel in distress who needs to be rescued, Alex is not a typical helpless damsel.

The plot of Lemaitre’s crime-suspense thriller takes place in the streets of Paris. The story’s pace moves quite quickly when Alex is abducted from the street, and transported away to a warehouse. Here, she is physically assaulted and beaten, the details of which are sometimes too gruesome and graphic. Her abductor wants nothing more than to watch her die. When a small chance at escape presents itself, Alex hurls out of the cage at lightning speed and tries to make her getaway. Meanwhile, Commandant Camille Verhoeven is racing against time to locate Alex. He has no leads, no clues, and no suspects with which he could solve the case. During his investigation, Verhoeven quickly learns that Alex is not an ordinary victim.

After reading Alex, readers will be far more intrigued by Alex herself, then the actual crime scenario. Lemaitre’s skill at making readers reevaluate what they think they already know, forces readers to plow through the novel. Unlike most crime fiction, which is typically set in the US or UK, a Parisian backdrop makes for a nice change, not just because of the scenery but also because the justice system in France is quite different, which will give readers a welcome change. Lastly, most crime stories feature a crime and a quirky detective who solves the mystery. In Alex, the characterization of the lead characters is quite different. Even though there is a Commandant trying to solve the case, the victim is also portrayed as a sharp and resourceful individual.

Pierre Lemaitre is an author, teacher, and screenwriter, who hails from Paris, France. He has written numerous award winning novels and stories. Some of these are titled The Trilogy Verhoeven, Craftsmanship, Black Frames, and Goodbye There.

Lemaitre is considered as a master crime and thriller writer. He has received numerous awards and distinctions for his contributions to literature. One such award is the First Novel Award at the Cognac Festival in 2006. Many of his stories have appeared in cinema and television, particularly Black Frames and The Man With Two Faces. Apart from writing, Lemaitre also worked as a teacher of literature.

During November this year Crime Writers Association came up with a poll, which among other categories voted Agatha Christie as the best ever crime writer. Maxim Jakubowski, a CWA member and a celebrated crime novelist was not happy with the verdict or the choices put up in the poll. According to him, and I also believe, that although Dame Christie remains as the doyenne of crime writing, but the genre in itself has developed way beyond what s...
READ MORE

This book is a major hit in 2013. In Part-I, a beautiful young woman (Alex) was brutally hit and kidnapped by a middle aged man. Officer Camille, a dwarf, whose pregnant wife was abducted and murdered in the similar manner, is forced to take up the case. But Police is totally clueless. No body knows this girl….. no complaint was lodged. In the meantime the man locked Alex in a cage, where she can neither sit properly nor lie down, naked, in a deserted building. The only food she is been provi...
READ MORE