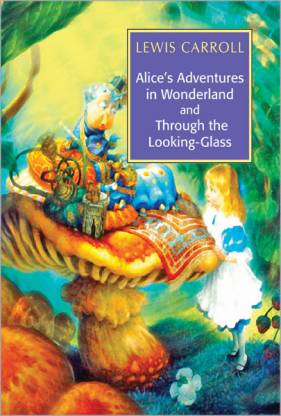 Description
Lewis Carroll’s masterpieces, Alice’s Adventures in Wonderland and its sequel Through the Looking Glass, mark an epoch in the history of dream literature, having as much appeal for adults as for children. The story is of a girl Alice, who chasing a rabbit falls into its hole to suddenly find herself in a zany world whose rules appear to change with each person she meets. It is a weird wonderland where flowers talk, chess pieces come alive, playing cards are anthropomorphic and is inhabited by fantastical characters as the Queen of Hearts, Tweedledum and Tweedledee, Chesire Cat, Mock Turtle, Mad Hatter—each being more eccentric than the last.
Not merely an awesome children’s story, Carroll has created a brilliant biting satire, attacking on the prevalent norms, morals and ethics, a feature which has made the story of lasting popularity with grown-ups as well. A truly marvellous book not to be missed by anyone who enjoys a magical romp through playful use of English language; one is likely to find the real life boring after its reading as the chances are to fall in love with the memorable characters.

About Author:
Charles Lutwidge Dodgson, popularly known as Lewis Carroll (1832-98) has been the author of two most popular tales for children. The eldest of eleven siblings, Charles showed an early talent for writing. He received his school education at Rugby at a time when the school was run by the famous headmaster Dr Arnold. Later he studied at Christ Church College, Oxford, and worked as lecturer in Mathematics in the same college from 1885 to 1891. Though ordained as clergyman in 1861, he did not preach. Carroll was by nature a shy man who felt at his ease only in the company of children. Alice was one of these child friends whom he had entertained with this story during a summer day outing on 4th July 1862, and which had subsequently immortalized the teller.
Alice’s Adventures in Wonderland (1865) is the wonderful fantasy that has held children and adults alike under its spell for more than a century since its first appearance. While adults can consider it as a travesty and parody of education, politics, poetry and literature, and even Victorian life in general, for children it is the perfect and most delightful fantasy world where no rules of conventional logic or mathematics, legality or proportion may apply. It is a most admired classic in nonsense literature. While quietly reading a book little Alice is suddenly distracted by a rabbit which runs fast through the lawn, and disappears into a hole. Alice jumps up to run after the rabbit and falls into its hole. As soon as she reaches the bottom an altogether different world from the one she knows above greets her, Alice finds that she has arrived at a strange place where anything can happen without notice, the most improbable developments can occur with the wink of an eye, in short no rules of the world above apply any more to anything here. The members of this fantasy world are—a white rabbit who is always in a hurry, a grinning Chesire cat which can vanish yet leave its grin behind; a caterpillar, a ‘mock Turtle,’ a fish-faced footman, a baby which turns into a piglet; a ‘mad hatter’ throwing a garden party which is attended by a ‘March Hare’ and a ‘sleepy Dormouse;’ a pepper-happy cook throwing everybody into sneezing fit; even a queer queen of the cards along with a duchess; mysterious bottles—magic cakes—and magic mushrooms which can help instantly grow or shrink; plants and creatures including Alice herself, shrinking and growing unpredictably; a garden of talking flowers, and brush-happy gardeners splashing red paint on rose bushes. There is also a croquet game played with live flamingoes as mallets, and runaway hedgehogs as balls, a ‘lobster quadrille,’ and even a trial of a thief for stealing some tarts, in which animals occupy the jurybox.
A most delightful fiesta of the nonsense indeed!
How will little Alice face this world? Will she be able to come out? Or, will she be willing to come out at all?
Through the Looking Glass (1872) is an afterpiece of Alice’s Adventures in Wonderland (1865), which is about the further adventures of Alice. This was also highly successful and very popular with both children and adults. Here little Alice passes through a mirror and enters the land behind the glass. Since it is ‘mirrorland’ things happen in the inverted order of back to front. Alice has to keep running fast enough in order to stay in the same place. Again, Alice cannot reach a garden by walking towards it; she has to walk resolutely in the opposite direction in order to reach it. Goods in a store suddenly glide up and slips out of reach. Here Alice meets some new people who are as interesting and queer as the inhabitants of her ‘wonderland’ had been. Stepping into the Looking-Glass House Alice meets living chesspieces, including the Red Queen, the White Queen. Only they belong to the world of chess rather than that of cards. She also meets Tweedledum and Tweedledee, the White Knight, the Walrus, the Carpenter, and finally Humpty Dumpty, who makes the memorable claim: “When I use a word it means just what I choose it to mean—neither more nor less.” They would accept only their own fantastic logic, and would be either too officious or too critical to whatever poor Alice has to say or do. What will Alice do with these strange people, or how will she meet their strange ways? The book also contains Carroll’s famous nonsense poem ‘Jabberwocky.’
Alice, the little girl, running through her disconcerting adventures in this dream world, emerges as the most delightful child figure in literature, with whom many children would identify themselves imaginatively. Alice, wandering along in her ‘Wonderland’ and ‘Looking-glass House,’ continues to attract the fancy of children and adults alike.
The books are thoroughly and consistently amusing, even hilarious on occasions, while a charming simplicity marks the style of narration.
Greatly popular across the world Alice’s Adventures in Wonderland has become an archetypal children’s story which has inspired writers to adapt the model in various ways. Sukumar Ray (father of Satyajit Ray), the brilliant but short-lived talent of Bengal wrote his very popular Ha-ja-ba-ra-la on the model.
Dodgson/Carroll also published The Hunting of the Snark (1876), a mock-heroic poem, Sylvie and Bruno (1889), a sentimental piece, and several mathematical treatises including “Euclid and His Modern Rivals” (1879). Carroll (or Dodgson) was also a pioneer in the art of photography, and an excellent portrait painter of children. However, he is best remembered for his two books on the adventures of Alice.
Read More
Specifications
Book Details
Contributors
Additional Features
Ratings & Reviews
4.3
★
63 Ratings &
8 Reviews
5

I bought this book for my 4 year old. Yes, a little ambitious it my sound, but I am quite keen to gently introduce the ever-classic carroll writing to the child.Though she can't certainly read it by herself, she does enjoy listening to the rich english and of course Alice's beautiful and humorous thoughts, dialogues. I will follow up with my daughter to pick this up as early reading in an year's time. Maybe, 5 1/2 years would be the right time.
READ MORE

Go for a better print.

I love Alice in Wonderland, and I already have 2 copies of the same. I ordered these for a friend of mine on her birthday, but was quite disappointed to see the print quality. Not great. Looks like a xerox. I suggest you either buy the one by Collins Classic - which I got for 12 Euros so I agree its expensive, OR you buy a second hand copy from Flora fountain at Mumbai. This one is ok only if you havent read about Alice's adventures before and are planning to simply dispose the book after re...
READ MORE

The printing is not that good very small letter

I wont recommend this book as the printing was very small and unattractive for todays kids. I have read these kind of printing when I was a kid but nowadays kids wont like the printing.....Though its a classic and well known book. I recommend other buyers to look for other publishers of the same book.
READ MORE

The book is nice but the letters are very small and I received an used book.
But you can go for it .Both the stories are awesome .
READ MORE

My 7 yr old girl found it very interesting and finished it in a couple of days. The imagery and fantasy depicted in the book keeps the young readers captivated.
READ MORE

Though this one is a child fiction, but I have always loved it and I kinda lost my last copy of this book. I love such books, so if you like everything that is just imaginary and nothing close to reality.. go on for this book.. :)
READ MORE

My 8 year old Nephew likes this book much!

I have purchased this book for my 8 year old nephew. He enjoys reading this book. In the first day itself he crossed 75 pages.
READ MORE