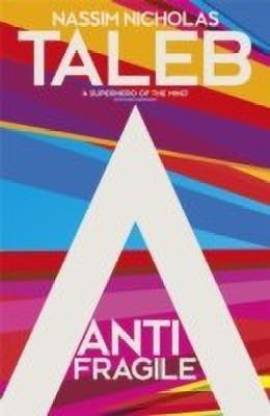 Antifragile celebrates the randomness and unpredictability in all aspects of life. The book teaches readers how to grow stronger by accepting the uncertainty and disorder of the world around them.

If something is fragile, it means that it is delicate and easily damaged. To be antifragile, the author says that one has to thrive on the chaos of the world. Attempting to eliminate the risks and trying to live in a safe cocoon will just make one weak.

Just like the body is strengthened by subjecting it to stress in the form of physical activity, many things are strengthened by the opposition or resistance they encounter. The author points out that rumours and riots gather strength from attempts to quell them.

When people try to fit things into their preconceived notions of how they should be, they actually lower its resilience and dynamism and make it weaker. He says that the world is naturally chaotic and that idea should be embraced not avoided. Just like an overprotective mother might actually affect her children such that they may be unprepared for injuries and failures, entities like organizations and economic systems that try to eliminate risk will actually harm themselves.

Antifragile points out that all things such as individuals, society, businesses and economic systems, are all subject to the rule of the survival of the fittest. Accepting this idea, it says, will ensure that even if the individual fails, the whole system would survive.

The author also says that failure is part of the chaotic nature of the world, and that there is no dishonor in failure. The failure of individual entrepreneurs and scientists actually benefits the business or scientific community. They learn from the mistakes of others and become stronger.

Nassim Nicholas Taleb is a Lebanese American statistician and writer.

He is also the author of Fooled by Randomness: The Hidden Role of Chance in Life and in the Markets, The Bed of Procrustes: Philosophical and Practical Aphorisms, and The Black Swan: The Impact of the Highly Improbable.

Nassim Nicholas Taleb was born in Lebanon. He earned his Master’s degree in science from the University of Paris. He also has an MBA from the University of Pennsylvania's Wharton School. He is a linguist, with command over several languages including English, Arabic, French, Spanish, Italian and Greek. He has taught at many universities like the Oxford University, and the Polytechnic Institute of New York University. His books focus on the ideas of randomness and uncertainty.

If you're a fan of his previous work, this is like a Capstone book to cover all the previous ones. He brings in various concepts from Fooled by Randomness, Black Swan, among others and binds it in a cohesive story. Antifragility refers to systems that get better upon being subjected to external stress/strain as opposed to merely withstanding it/breaking under it. Not only does he give examples of this, with progress in the book, you'll be able to see how one can benefit in one's life from usi...
READ MORE

In my opinion nassim Nicholas taleb Express his views that why antifragility is important in view of nature and for writer itself.
He explained why antifragility bcan lead to a better life,
And how it benefits us...
READ MORE

Taleb's books are always different. This one is even more different and fantastic in having a different perception for this modern days. Antifragile is a new term framed by him. Great to read.
READ MORE

how to gain from disorder

In our eternal endeavor to excel in everything, by ironing out each and every rough edge/s that occur in every day life, we unwittingly set up ourselves, our relationships, our workplace and businesses, to 'black swan' events. In other words, events that rarely show up but have intense and lasting consequences. And when they do, they affect us profoundly.

Taleb says this is an undesirable side effect of our post modern enlightenment, that is just not helping us, but rather, is actually goi...
READ MORE

Out of all Talebs books i consider this a gem since it gives a different take on life.I recommend it to anyone who wants to be different. Hope you read it!!!

Disclaimer:I am a big fan of Taleb,so i 'am' biased.
READ MORE

A Stand on Philosophy.

Encourages a drastic shift of mental outlook which in consequence help inform one's actions. As modernity evolves out there so should our thinking process to adept it to the ever changing environs no matter however twisted the notions seem to be at first sight. The author has fulfilled the demand with his independent thinking adequately in this book.
READ MORE

Awesome book. Everyone should read this book. It will change your perspective.
READ MORE