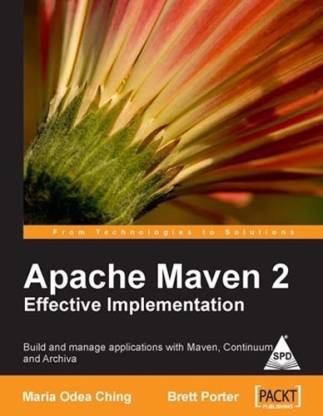 By building up a sample application, this book guides developers painlessly through building a project with Maven. This book shows you how to combine Maven with Continuum and Archiva, which will allow you to build an efficient, secure application and make developing in a team easy.

You may already be aware of the pitfalls of 'integration hell' caused by changed code being submitted to repositories by a number of developers. When you implement Continuum in your build, you can easily perform continuous integration, avoiding timely rework and reducing cost and valuable time. You will be able to use Maven more efficiently in a team after you learn how to set up Archiva, Apache's repository manager.

It's easy to quickly get to work with Maven and get the most out of its related tools when you follow the sequential coverage of the sample application in this book. A focus on team environments ensures that you will avoid the pitfalls that are all too common when working in a team. Soon, by learning the best practices of working with Maven, you will have built an effective, secure Java application.

What you will learn from this book

Approach
All material in the book will be worked through by example, building up a sample application. It is intended to be read through in sequence, though once complete, should serve as a suitable reference for certain cases that can be referred to directly.

About The Author
Brett Porter is a software developer from Sydney, Australia with a passion for development tooling, and automation. Seeking a more standardized and reproducible solution to organize, build, and deploy a number of software projects across teams, he discovered an early beta of Maven 1.0 in 2003, and has been heavily involved in the development of the project since. He is a member of the Apache Maven Project Management Committee, and has conducted presentations and training on Maven and related tooling at several conferences and events. He founded the Archiva project in 2005. Brett is also a member of the Apache Software Foundation. Brett is currently VP, Product Development at G2iX, in charge of the Maestro division. He and his team seek to make developers more efficient by offering support and services for development and automation tools including Apache Maven, Apache Continuum, Apache Archiva, and Selenium. Brett was co-author of the book Better Builds with Maven, the first book to be written about the Maven 2.0 release in 2005, and has been involved in reviewing Maven: A Developer's Notebook and Java Power Tools.

Maria Ching grew up in a small town called Daet, then moved to Manila when she went to college. She took up Computer Studies at De La Salle University and graduated in 2005. She started using open source tools from her first job after graduating and from then on, got interested in everything open source. When she came to work for Exist, she got assigned in a project doing a lot of development work in open source projects, specifically Maven, Continuum, and Archiva. Back then, Continuum and Archiva (formerly named Maven Repository Manager) were still sub-projects of Maven. Eventually, she became a committer, then a PMC member of Maven. In 2008, Continuum and Archiva became top-level projects at the ASF and Deng was elected as PMC Chair of Archiva. She is still currently serving as PMC Chair of the project and as PMC members of Continuum and Maven.

Read More
Specifications
Have doubts regarding this product?
Safe and Secure Payments.Easy returns.100% Authentic products.
Back to top