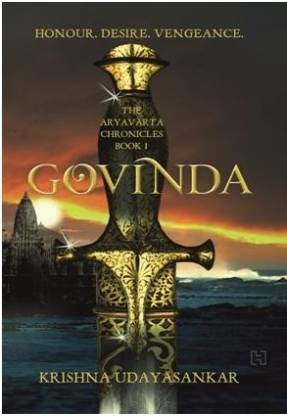 Aryavarta is the kingdom of the noble and has been ruled for centuries by the first dynasty of sages, who were the descendants of Vashishta Varuni, Brahma’s oldest son. The realm of the noble, has been dominated for centuries by the Firstborn Dynasty of Sages, whose ancestor was Vasishta Varuni, Lord Brahma’s oldest son. They were responsible for maintaining peace and order on Earth. The Firewrights are the King’s weapon makers who defied the sages, eventually leading to a battle between them. This results in Aryavarta getting divided into several kingdoms.

When the last Secret Keeper of the Firewrights dies, the kingdom of Aryavarta faces a serious threat from its enemies. Vyasa in order to protect the kingdom wants to overthrow the ruling King, and thus starts an epic battle for the throne. Govinda, an erstwhile cowherd and now the Commander of the Dwaraka armies must do his best to protect his people from the conflict. As the entire kingdom of Aryavarta stands divided and drowns in betrayal, brother fighting brother and deception, the innocent people are sacrificed.

Krishna Udayasankar is a graduate of the NLSIU, Bangalore and holds a PhD in Strategic Management from the Nanyang Business School, Singapore, where she is presently working as a lecturer. Her other works include Objects of Affection, a full-length collection of poetry and has been the editor of Body Boundaries: The Etiquette Anthology of Women’s Writing.

There has to be a law against writing and releasing books in parts - it is sheer torture to be kept waiting for the next one!

Unlike the stuff dished out by the likes of Ashok Banker, this retelling has its basis in what can best be described as non-mainstream versions of the Mahabharata - stuff that we might have never otherwise read.

Having been a huge fan of the new wave of mythological retelling, I had been looking forward to the release of " The Aryavarta Chronicles ". The author should be commended, first off, in even thinking of tackling an epic the stature of "The Mahabharata". The epic has been etched in our memories with the excellent TV series and the millions of comic and graphic renditions. I was frankly, not looking for it, to hit the levels of "Jaya" by Devdutt Patnaik (a personal favorite in terms of Mahabha...
READ MORE

Waste of money..time and brain cells!

After reading brilliant, epic worthy reviews on flipkart.. I ordered my own..
I was thoroughly disappointed! The author seems to have been influenced heavily by amish tripathi and hence, started on her own quest of writing a myth based book..

You need to concentrate really hard to get the writing style and connect the sequences as u read on... Unlike meluha series which was easy to comprehend.

Maps or some family tree illustrations would have been helpful to begin with. The firewrights A...
READ MORE

I read the book. I have read other books too.

Finally, some class in writing from an Indian in the recent times. Fiction not Fiction. True Not true. Maybe, maybe not. But the book is unputdownable.

A great job done in stripping the frills (aka myth/divinity/whatever from the epic) and presenting the facts chronologically with a touch of politics at every page. Sweeeet.

A story like Mahabarata has enough and more room for the narration to lose focus. The authoress has done a commendable jo...
READ MORE

kind of a classy

The story line is great work, on how started and mixing up of mythology and science is brilliant; but the narration was bit of clumsy. If you are book lover you'll like it but if read occasionally think it out.
READ MORE

Am a fan of this type of writing where the authors retell the epic with human prespective and emotions rather than Godliness. The books by Amish were a good example of the same and was expecting such standards. But this book did not appeal so much. Took some time to comprehend the events. The style of narration was not smooth. I like to finish my books in 4-5 days and if intresting then in 2 days but this book took me 8 days to finish. Just didn't feel like going on with it in the beginning. ...
READ MORE

Whenever history and mythology in intertwined, the product is generally nice.. Good narrative. Interesting description of scenes. A very innovative take on Mahabharath. Eagerly waiting for the 2nd and 3rd of the series now.. Cheers. Rahul
READ MORE

recreating an epic of the most humungous proportions,paraphrasing a great deal of literary works and research works that come with it,and not to mention the author's own unbridled view of each character of the greatest story of our times,and the deeds of the greatest hero of any times-its a work in itself.without another word,kudos to mrs udayashankar.

i couldnt finish this book without alacrity,marvelling ever so frequently how sumptuosly the author has developed each character,how intricat...
READ MORE

THE BOOKS IS SO DESCRIPTIVE ABOUT THE AGES OF MAHABHARATHA BUT SOME OF THE EVENTS IS NOT AS DESCRIBED IN MAHABHARATHA ITS A WAY DIFFERENT FROM MAHABHARATHA THAT WE HAVE BEEN READING FROM OUR CHILDHOOD AND THE DESCRIPTION OF THE FAMILY TREE IS LITTLE HELPFUL BUT I FEEL THE FAMILY DISCRIPTIONS IN THE BOOK NEED TO B MORE CLEAR THEN THEY ARE .
THE WAY WRITER APPROACHED IS GOOD,THIS BOOK IS WORTH READING AND IM HOPING THE NEXT BOOK IN THE SERIES TO BE BETTER THEN THIS BOOK
AND ALSO EXPECT THAT TH...
READ MORE

I rate this 4 stars solely because it has been written by a first time writer.

Good points:
It has a fast pace and the author has tried to related the characters of the people with their actions.

Bad points:
Though it is supposed to bring about the "human" factor of people we now look upto as "Gods", I dont see that. Govinda is a selfless, all-serving person who is playing the role of God who even the all mighty First borns are unable to read. It just felt like a re-rendering of parts of t...
READ MORE