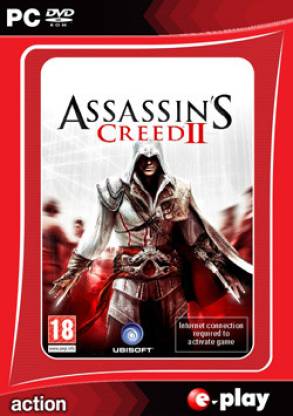 Desmond Miles is on the run. The place where he relived his memories is no longer safe. In order to find the real reason why everything has gone haywire, Miles must uncover secrets hidden way back in the 15th century. With his trust already broken, can Desmond believe anyone ever again? Assassin's Creed II attempts to find out the answers for all the questions that were left unanswered at the end of its predecessor. Toggling between past and present, you have to now help Miles to maintain his sanity and uncover all the secrets before it’s too late.

The sequel to Assassin's Creed and the 2nd game in the Assassin's Creed franchise, Assassin's Creed II includes many tweaks and additions that make it a stellar buy. The game is targeted towards gamers who like playing video games that revolve around historic events. The open world action-adventure video game has stealth elements embedded into it. The game DVD is available for the PC and carries a Mature rating from ESRB.

Abstergo labs have turned into a hostile territory. The genetic memory reading device, Animus, which allowed you to access the memories of your forefathers is unsafe now. Teaming together with Lucy Stillman, you, as Desmond Miles, must travel through time using an advanced version of Animus to become Ezio Auditore da Firenze. Arriving in Italy, you must play the game set during the Renaissance period in the late 15th century to become an assassin and find out the truth behind a series of family murders.

The game’s single-player campaign takes you throughout the country of Italy. You can visit places like Venice, Florence, Forlì, San Gimignano and others. The game borrows all the popular elements from its predecessor including the Leap of Faith: a feature that allows you to jump down from high-structured buildings into a bale of hay.

There are many different things tweaked in Assassin's Creed II. You can now climb walls faster, sneak around smoothly in front of enemies, leap farther when you hop around rooftops. All this adds to the entertainment quotient of the game, making it more interesting to play. The game has several side missions that include searching for tombs.

Tombs hide ancient artefacts that can be recovered, leading to larger prize. Tombs also give rise to puzzles. These puzzles sometimes require you to travel from one place to another to solve them. The journey is very entertaining as you can take alternate routes and employ any technique you want to successfully solve them. The weapons that Ezio Auditore can use include the dual hidden blades, spears, axes and many swords. The combat has been reworked as you can down swing down from a ledge and take down an enemy with ease.

Optional objectives in the game include finding hidden treasures, reinforcing establishments and pickpocketing. All this gives more strength to the gameplay, increasing the game’s replay value. Re-establishing business house will earn you income which you can spend on upgrades or for buying villas and more.

Assassin's Creed II allows you to hire an array of different groups of people to distract the soldiers. You can hire a group of courtesans or a group of thieves to fight against the guards. All this shows how versatile the game is, making you to play it more and more. Assassin's Creed II adds in a great deal of variety as you can now swim underwater or discover hidden glyphs that assist in tying the dual storylines together. The updates, DLCs and extra content for the game can be downloaded directly from the company’s website.

AC II is indeed the best AC game to date. This game is one of the reason why people became fond of AC franchise and started drooling over every AC game with high expectations.

Out of all the AC games, i would recommend you to at least play AC II, if not every other AC.

Welcome to Italy.!! yes this game takes you places across renaissance Italy. More than the places is the new hero Ezio. You literally follow this guy right from his birth till he establishes himself as an assassin..! and further on in his life in later games.
This is a must play game. Its got lot of interaction with the world like buying and upgrading weapons and using the environment to its advantage like hiding from enemies or performing a stealth assassination. And not forgetting the free ...
READ MORE

Good value for Money on Flipkart

Assassin's creed 2 is a very exciting game. Has got excellent graphics. You need internet connection during installation of this game, as well as during the game if you intend on gaining a couple of rewards on completion of certain in-game tasks from Ubisoft; which means that you will require to set up a Ubisoft account.
The game does take considerable time for installation on a standard PC. And you will need a decent Graphic card to keep the gameplay smooth. Those with only Intel HD Graphics...
READ MORE

Game is awesome, but the DRM is evil. Place like India having a connection like BSNL, no offence to both , but where the Internet always get Disconnected, This game is not meant for that place !!
Ubisoft has s awesome series , i have finshed it few time ago , but buyed the original to play as price at flipkart is awesome , but the Internet need killed the fun !! Stil game is 5/5 or 10/10. Not much replay value though !!
READ MORE

flipkart brought this to me in only 3 days which faster compared to my previous shipments which took 7-8 days.I am happy with their improvement and product is also good.the game is awesome.
but those who do not have a internet connection or slow connection do not buy this as you may have problem.
Overall product is & good game awesome.
READ MORE

It's rare to find a game series like this one.

They improved a lot the gameplay from the first game, and the story line is much better constructed, avoiding that feeling of be doing the same thing every time. So you will not get tired so easily now!

The only cons that I can say about it, is the fact that it still a easy game.

I'm a foreign, so the price for me was great!
READ MORE

hats off yo Ubisoft !!

I would i like to thank ubisoft for giving the world such a good game.Its a Must play game for all gaming freaks out there. and its the Game of the Year too. 5 stars for all the visual treat this game provides.. Enjoy !!
READ MORE

I Ordered this game on june 3rd with "1 Day delivery"
I got it the very next day! Thank you flipkart! 10/10

Both The CD & Key Were Genuine
I Installed it on PC ( Took some time because it was downloading UPlay launcher )
Game played kinda slow because i had Zotac nvedia 210 1GB Card, an entry level GPU!
Then i reduced my graphic card settings to 800x600 and it worked perfectly!!

This was my 1st time Buy...
READ MORE

It is the best game i've ever played.in the first level,it shows that Ezio Auditore da Firenze has born and then the fight with templar workers Then the most interesting part is the end of the game ezio told that he had many questions like what is going to happen finally with the apple of eden after all the games of AC BEST GAME!!
READ MORE

This is a amazing game released in the Assassin's Creed series. The game play, design & narration of storyline is simply amazing. UBI soft rocks.

Although I had finished the game much earlier than I purchased. I still bought this one has it was worth the money and like to collect this amazing game series.

If you haven't played this game or original AC(1) I recommend you better grab this one I hope you'd surely love it.