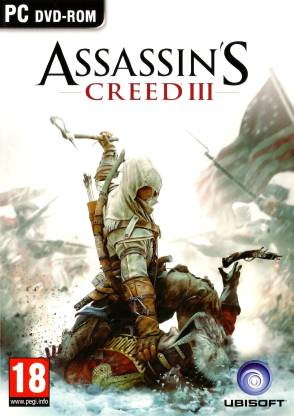 Assassin’s Creed III is an action-adventure game that takes place during the events of the American Revolution. You will get to explore 18th century Boston, New York in detail as the game is set in an open world environment which allows free movement. Played from a third-person perspective, the primary objective is to use your stealth skills to track and get close to your target before attacking him. This game is the fifth major installment in the series and a direct sequel to Assassin’s Creed: Revelations that came out in 2011.

Stealth action gamers will love this game with its improved graphics, gameplay, story and game physics. This version of Assassin’s Creed III is for the Xbox 360 console and features both single player and multiplayer modes. This action-adventure stealth game is rated M for Mature 17+ by ESRB and 18 and above by Pegi as it may contain intense violence, blood and gore, sexual content and strong language. The game is developed by Ubisoft Montreal and published by Ubisoft.

Assassin’s Creed III starts in the present day with Desmond using the machine known as the Animus to relive the memories of his ancestors to find a clue as to how to stop the catastrophic events of December 21, 2012. You play Desmond’s ancestor Ratonhnhake:ton who is half-English and half-Mohawk. He is one of the guardians of the Grand Temple and gets to speak to Juno who warns him that if he does not leave his tribe to find his destiny everyone will suffer. Juno asks him to find Achilles Davenport, a master assassin to help in training and shows Ratonhnhake:ton the symbol of the Assassins.

Ratonhnhake:ton takes on the name Connor to be able to blend in more easily in town. Achilles makes him a full-fledged member of the Assassin’s Brotherhood after completion of his training. Connor then sets out to kill the Colonial Templars who were the cause of much harm to his tribe. New features such as double-counters, multiple takedowns and chain kills have been introduced to add more excitement to the game. Dual-wielding of weapons has also been introduced, allowing Connor to attack with both hands making him even more deadly. New weapons include a tomahawk, flintlock, hidden blades, pistol, rope darts and the bow and arrow.

The standard target locking system has been removed and replaced with the much more effective automated enemy selection system that helps you attack faster. This open environment game allows you to explore the city at will and even climb up building to spy on a target. The game runs on Ubisoft’s advanced Anvil Next game engine which is incredible at delivering smooth gameplay and brilliant graphics.

everybody who got the dlc codes dont put it in steam but instead put it in assassins creed game menu in extras ,redeem codes . it is not meant to be used in steam . i hope it will help u guys..

i didnt received the game yet even though i pre ordered it 4 months ago.
READ MORE

Worth waiting and money

1st of all, About flipkart delivery service regarding this game : AC3 was a most anticipated game of 2012. That's why flipkart got countless pre-order of AC3. It's very hard to deliver thousands of copies in one go. For reference you can check Apple iPhone 5 delivery report. All I want to say that just hang in there guys. flipkart is doing their best to provide game as soon as possible.

Now about this game :
Confusion About CD-key:

If you guys have special edition like me :then you will get...
READ MORE

WHERE THE HELL IN THIS WORLD IS MY GAME???

NOT RECEIVED IT TILL YET.. JUST WAITING N WAITING..
SAME THING HAPPENED WITH HITMAN ABSOLUTION...
i used to like flipkart a lot but now they really sucks.. improve ur standard as it was bfr...
common just send me my game as fast as u can deliver
READ MORE

Good Multiplayer but campaign mode is boring at times

The gameplay is good as it provides u with a very different option of weapons at ur disposal.It's a refreshing change for people playing only fps games as it's very different from those games. I liked multiplayer more than the single mode campaign since it has few more graphical options than the single mode and its more fun to play.The only issue with this game is that single mode campaign may become boring at times.Overall one of the best games of 2012.
READ MORE

it is the best of all ac's .the game needs a good gpu or else not worth buying.
the story line is just awesome.there are side line quests even.
new plots new characters and is fun.
READ MORE

A creed unlike the rest..

no ..this game didn't have the witticism of ezio ..or the wisdom of altair...
it didn't have the serenity of masyaf ,the glory of rome or the colours of venice..
but this was the best ac game till date... yes ,connor might not have been the ideal choice of the gaming community to ignite the revolution...but he sure did hell of a job! The load of historical characters; the vast expance of the frontier...the wrath of the jungle...the menice of the redcoats and last but not the least the betray...
READ MORE

One of the best games in terms of story and graphics..

very realistic and an excellent game play. very good story line. different from the previous parts in its series thus makes it more interesting. if you are a Assassin Creed lover it couldnt get better that this.
my opinion a must buy for all the gamers like me.
READ MORE

Great Addition to the Series

The game is simply superb!! Graphics are amazing. The cities look real, especially the marketplaces. The frontier is breathtaking and extremely vast.
I think the side-missions overshadow the main quests.. Homestead and naval missions are the best. Earning money is a little tough and you have to work for it. There is fast travelling system too, but you have to explore the underground to unlock the in-city locations (got lost while trying :D).
I didn't liked the character much, his voice was of...
READ MORE

Iam a hardcore fan AC series i have played all AC games from AC1,AC2,ACB,ACR and now AC3.But AC3 is not good as old Ezio's Gameplay.The graphics,musiq,controls and story is very poor.AC3 is like shit in performance not utilizing my full system performance.I have 4.5 ghz intel i5 2500k processor with 2x gtx 560 ti in sli the performance is not good as expected.Iam not happy with this game so far.for me AC2 and ACR are the best
READ MORE

Prepare yourself for the revolution......!

Assassin's Creed III is back and back with a bang!! The game's take on the American Revolution pays off to a great extent, new weapons, awesome new environments, new gameplay elements and a fantastic character line-up help to make this wonderful game all it can be.
AC III takes its time in finally getting you into the shoes of our new protagonist- native American Assassin Connor Kenway (or Ratohnhaketon ), however, once all is said and done you will feel glad that the game took its time in e...
READ MORE