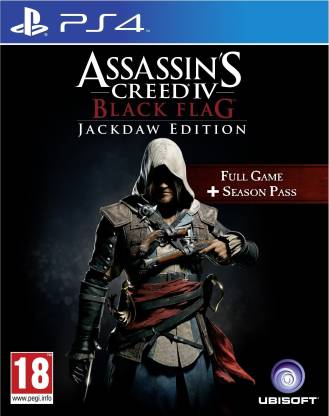 When you are pulled into a massive war without your intention, you have no option but to fight. A historical action-adventure stealth single-player/multiplayer video game for the PS4 console, Assassin's Creed IV: Black Flag is set in 18th century Caribbean during the Golden Age of Piracy and is interwoven between the present day and a historical setting. The game follows the character Edward Kenway, a Welsh privateer who eventually becomes a pirate following which he becomes a member of the Assassin Order. Edward is the father of Haytham Kenway and grandfather of Ratonhnhaké:ton who are the central/playable characters of Assassin’s Creed III. Abstergo Industries hires the unnamed player to explore the memories of Edward in order to gain information about a First Civilization structure called the Observatory. Edward unwittingly kills a rogue assassin and gets pulled into the age-long war between the Knights Templar and the Assassin Order.

Rated 18 by PEGI, the gameplay of Assassin's Creed IV: Black Flag sees the player controlling Edward Kenway in an open world environment that gives more freedom to move around in this, the sixth installment of the Assassin's Creed game series, in contrast to the previous Assassin's Creed games. The game is centered around three prime cities, i.e., Havana, Kingston and Nassau in the Bahamas, all of which are mainly influenced by the British and Spanish empires along with the many pirates. This game also showcases 50 other distinctive locations with the action happening, both, on land and sea. The hunting system allows the player to fish in the water and hunt on land. The ship that the player commandeers, the Jackdaw, can be upgraded through the span of the game. The player is also granted a spyglass with which one can spot distant ships and its contents. One can also examine if a particular island has any animals to hunt down, treasure to discover or high points that can be scaled for synchronization. As in Assassin’s Creed: Brotherhood, the recruit system has been implemented in this installment as well, thereby enabling you to recruit crew members. Your crew members are not permitted to assist you in Assassin's Creed IV: Black Flag as it was made to be more challenging than the previous installments. The multiplayer mode is land-based and offers many game modes and fresh settings. With spectacular graphics, numerous side-quests, an impressive story and incredible gameplay, Assassin's Creed IV: Black Flag offers a captivating and awe-inspiring gaming experience.

One of the best game of the series! The story keeps you going and the vast immersive gameplay is the finest of all themes.
READ MORE

Ultimate game, I finished it 1 month only
READ MORE

the game is awesome

i love the game so much so much excitement and adventure is in the game this is my first assassin game and a love it . the game contain a beautiful story of a priate
i love the game and the must buy game of ps4
READ MORE

I played it first on my crappy pc and it was poorly optimized so decided to buy it on my new PS4 to have true next gen experience and guys its totally worth it !
READ MORE

One star not for the game. Not for flipkart. But for the seller RetailNet. This is not Jackdaw Edition. And this seller is selling everygame saying its some special edition. Got standard edition. Please dont buy from this seller named RetailNet. Otherwise the game is as fabulous as u can imagine.
READ MORE

I am only interested in the story part. This game has all the activities the pirates used to do. Harpooning is so fun, naval battles and boarding is awesome, drinking too mich rum make your camera go wheezzy, you can hunt and skin animals. You can dive underwater for treasures. the graphics are good.

The story is progressing and the best part is that u acquire ur assassins capabilities in the first two sequences itself. Havana and kingston are huge but nassau is relatively smaller.
U got ass...
READ MORE

when will i get it

awesome game i guess so but when will i get it.pls deliever it asap.i want it.ii have a ps4 and want to play on it caused i have finished killzone shadow fall and nba 2k14(bored).thank you
READ MORE