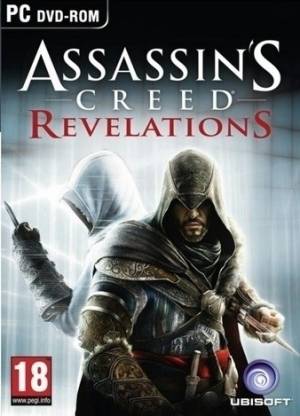 The game is for everyone who has grown playing the Assassin’s creed series. Targeted at hard-core gamers, the game portrays the grand history of assassins during the crusaders period. The third-person action adventure game has an open world environment where you don’t have the confines of a level based gameplay. You can move around as you like, accomplish tasks as you seem fit. Revelations carries a Mature rating from ESRB.

The story in Assassin’s Creed Revelations revolves around master assassin Ezio Auditore, who is following the footsteps of his legendary mentor, Altair. The journey takes him through the path of discovery and revelation. As the story moves forward, Ezio travels to Constantinople, the heart of the Ottoman Empire, where a growing army of Templars threatens to destabilize the region.

The single player campaign of the game is as entertaining as ever. You still accept missions and progress through the story as each one gets completed. The game also consists of mini games that are fun to play. You can earn revenue, search for hidden treasures and even recruit your own group of elite assassins who can be summoned at will, depending on the game status.

The game is visual leap over its predecessors as everything can be viewed in high-detail. From the markets at the grand bazaar to famous landmarks in the game like Hagia Sophia, the game offers beautiful and visually spectacular graphics. One of the many highlights in Revelations includes its sound. The voice acting is top notch and the soundtrack is amazing. Every sound is designed to suit the scene you are playing in, drawing you into the game and multiplying your joy of playing it.

The game introduces new elements such as the Hookblade. This addition is doubly helpful as you can zip line across buildings or use it to kill your enemies with one sharp blow. You can also seize districts of the city from Templars, thus expanding your revenue stream. The collectibles in the game now include Data Fragments that replace the Borgia Flags.

Revelations also brings with it the ability of bomb crafting. As you progress, throughout the game, you can collect ingredients that can be assembled into three different categories of bombs. The bombs can be anything from a standard smoke bomb to a version where the bomb shoots out coins that lure dozens of peasants.

I bought ACR having played all the Assassin's Creeds till date and as expected this game didn't disappoint me at all. AC has never had such a beautiful setting before, Constantinople is definitely the most lively, colourful and happening city that the Assassin's Creed series has seen. Ezio gets old and loses his lustere somewhat, but is still one of the greatest protagonists out there, Altair makes a comeback and its a joy to play as him, on the other hand Desmond isn't as good as in AC Bro...
READ MORE

The game meant to be played

My first Assassin's Creed game which made me a fan of this series. After this I liked this game so much that i played all the series of it. This is game is the best for those who have never played Assassin's Creed. This game will make them understand thye best about templars and Assassin's. About Altair and Ezio. Try it out ,I hope no complaints you will get with this game. Enjoyyyyyyyyyyyyyyyyyyyyyy.
READ MORE

I really hope that UBISOFT doesn't delay the release of the PC version the game like they had done for the last 2 editions of the game.We PC players are the real gamers and fans of the franchise and its high time the developers realize this. This is one of the best games out there by the way. Waiting for this "The last part with Ezio" with excitement.
READ MORE

Revelations is the final episode of the Ezio saga in Assassin's Creed. As we all know, anything that is new is not perfect.. sadly this is also the case with the animus machine..!! So now we have Desmond stuck in some kind of DNA limbo with conflicts between Ezio's and Altair's memories. Leaving that aside (you would anyways get to know..!!) Ezio is now in Constantinople, in search for keys to the secrets of Altair's knowledge. Again as a responsible master assassin, you help Ezio establish ...
READ MORE

Assassin's creed Revelations is a awesome title like it predecessor and a formidable successor to one of the iconic game franchise as we know this is the end story for Altair & Ezio and after it only AC 3 will be there .
Enough of the prologue , About the game i can say it differs in many kind with having the same soul gameplay . Graphics this time around have great detail and a diff bluish dark theme feeling (This looks great on PC with good graphic card ). Detail is well sketched and sound ...
READ MORE

One hell of a game!

This is one amazing game. The best part of this game is the multiplayer mode. The good thing about multi-player mode is that unlike many other games, the quality of kill plays more important than the count of kills. There have been scenarios where I killed two guys and won the round while the person who killed 12 people came second.
READ MORE

A Genuine product..fast delivery too.
Purchased 2 month ago(by preorder)
it is really genuine item
i've also register this game to ubisot,they've been told that u have a genuine game,u can now play online game!!
READ MORE

A good end to its predecessor

Constantinople- A buzzling market,once a history brought back to life to tell a epic tale to the last journey of EZIO.... man UBISOFT really took this series to the next level. Amazing graphics with beautiful sights and people making it so real.

Take a look at the game play i just put up

Multiplayer: Multiplayer is overhauled a lot this time and its neat and w...
READ MORE

ACR is worth it

it is the ultimate assassin experience truly,multiplayer mode is the reason 4 making acr stand out. gameplay is better than the others. reviews may hinder ur choice sumtimes but b sure if u want a awesum story with thrills this is the game...includes various other modes other than the campaign 2, so it will give u really gud experience...jus lik gta in renaissance !!

Great game. The game had a black screen error i.e when the game started on windows 7 a black screen would come but we the fans fixed it on the forums.

The story could have been a bit better

Gameplay, graphics and multiplayer are awesome
go for it! :)
READ MORE