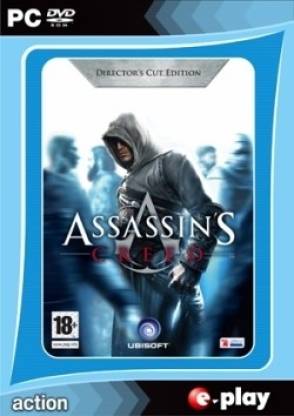 Uncover deadly secrets and reshape the history of the world as you explore the beautiful cities of Jerusalem, Damascus, and Acre in Assassin's Creed. Stepping into the shoes of a ruthless and cunning Assassin, Altaïr, your objective is to stop a menacing force that is threatening to destroy everything you stand for. Learn the tips and tricks of a master assassin to play a massive role in bringing back peace to the Holy Land.

The game is targeted towards anyone who likes stealth based games. The open world action-adventure game has plenty of new and innovative features that have redefined its genre. The game DVD is available for the PC platform and has a Mature rating from ESRB.

The game starts with you, Desmond Miles, interfacing with a genetic memory playing device named Animus. Replaying the memories, you will be sent back in time to assume the role of master killer Altaïr. Interacting with powerful personalities, you have to take down 9 prominent people to bring back order into the Holy Land.

The single-player campaign in the game will take you throughout the 3 cities as you try to unravel the deeply hidden secrets. The action is intense and will demand your attention in every level of the game. At your disposal will be a plethora of weapons such as a normal sword to a hidden blade in your wrist and many more.

You can unlock many new things within the game. As you advance through Assassin's Creed you can open up parts of the city that were previously inaccessible to complete your objectives. You can do a lot of things as Altaïr. One of the most impressive and visually spectacular features is the Leap of Faith. Climb atop a tower and you can jump down from a height of almost 50 metres directly onto a stack of haystack spread beneath. This activity never gets old, no matter how many times you do it.

You can climb up walls, hop on rooftops and take short cuts to reach your next mission. Assassin's Creed brings a unique freshness to a video game unlike any other. You can pickpocket information from strangers, ride horses across cities, eavesdrop on secret conversations and do a lot more. There are so many things to do that you will forget how much time has passed when you play the game.

If you want to step aside from the main mission and indulge in something new you can do it in Assassin's Creed. Side missions will take up a lot of your time as they are very entertaining to play. The PC version of the game includes 4 bonus missions. This adds to the gameplay, making it much more interesting. You can download the patches, updates, demos and wallpapers for the game directly from the company’s website.

This game is one of the best I've ever played. The best of the gameplay, story, graphics all put together in one disc. This is an award winning game with some really good reviews. Definitely recommend gamers to buy this one.
READ MORE

hats off to UBISOFT

this game is worth playing, spending your hard-owned money on this will not let u regret, its just like living life of an assassin u're self, great music, great graphics, great moves, complete game is designed well, i just fell in love with this game. After listening that this game has only 9 levels i was a bit disappointed but then it was really rocking that i hardly left my laptop, such an addictive game and best of all, its an addictive series starting from 2007 till now with the continuou...
READ MORE

It's an interesting concept, really quite innovative, putting a historical story in the middle of a science-fiction setting. Even the game-play mechanics are nice. The graphics are beyond good and can be breathtaking at times. What is especially nice is the sword play in the game. The way the protagonist moves with such grace in the counter attacks is simply sublime.

The only problem is that the game gets really repetitive after a while. You keep doing the same damn things over and over aga...
READ MORE

I have bought this game from Flipkart and it was delivered in Two Days (Impressive).

About the game, it is good and i have already finished it. Good Story & Good Presentation.

Best part is that once you start playing this game, you will want to finish it as soon as possible.
READ MORE

1
1
Permalink
Report Abuse
5
Assassin's Creed is a beautiful, exciting experience that will stay with you long after you finish it.Huge, gorgeous world that feels wholly alive.It's fun to run across city rooftops Joyous mix of stealth, action, and platforming, Stunning sound design features fantastic voice acting and a beautiful musical score Tons of small details will constantly amaze you. I Got this in 2 days. The packaging was good. Thanks to Flipkart.
READ MORE

it is very good game, good start to a great franchise .
The DX10 verson have some issues , it works well and DX 9 version is good. Now it is cheapest price at the moment !! Worth a Play !!
READ MORE

Guys this game is awesome and great delivery by flipkart because i bought it yesterday and flipkart gave me the parcel.The storyline of this great really.... and its not boring at all. Though the graphics is not better than assassins creed 2 or brotherhood but storyline is awesome........ GUYS MUST BUY PRODUCT FOR GAMERS......
READ MORE

True Thing About The Game

First Of All Dont Be Scared There's No Extra Downloading From Internet . Super Gameplay . First It Will Seem A Bit Boaring But The Full Of Amaze Jump Anywhere Climp Anywhere Fights Amazing In All Awsome . U Must Buy It.
My Specs:-
Lenovo G50-45
Windows 10
AMD Apu QUAD Core A8(6thGen)
4 Gb Ram
AMD Radeon R5 M330(GPU)
Its Runs Smooths On High Graphics
Just Turn Off Multisampling
Or If U Have GTX 660 Or Radeon 270 Or Better Go On Full Graphics
READ MORE