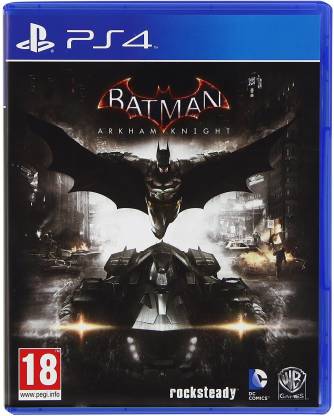 When a terrifying force of evil threatens the very existence of the city you love, you have no other option but to fight the darkness as the darkness by becoming the Batman. A single-player action-adventure video game for the PS4 console, Batman: Arkham Knight is set a year after the events that took place in Batman: Arkham City, the previous installment in the Batman game series. After the death of the Joker, Batman is overwhelmed by the loss of his nemesis and the deep bond that they shared. The citizens of Gotham, however, feel more secure than ever. Seeing this, the Scarecrow decides to make a return to Gotham with a crew of some of the most ruthless villains, i.e., Riddler, Two-Face, Penguin and Harley Quinn. Scarecrow threatens to unleash a whole new strain of a fear toxin. And, that’s not all. A new villain named the Arkham Knight makes an introduction in this game as well. It is now up to the Caped Crusader to save the innocent citizens of Gotham.

Having received a rating of 16 from PEGI, the gameplay sees the player controlling the Batman in a fashion that is similar to that of the previous installment. You can unleash a barrage of attacks with the use of weapons such as the grapnel gun, the line-launcher and batarangs. The countering system, which allows you to counter enemy attacks, and detective vision, which helps in assessing crime scenes in order to get a lead on the case, enhance your gameplay as well. Batarangs and the line-launcher can be used when you are gliding through the massive open world environment too. A new skill named “Fear Takedown” has been included in Arkham Knight which allows you to defeat up to three enemies simultaneously, however, you have to be undetected for this to work. Time is slowed down after subduing each respective enemy when executing this attack. Hazardous items in the environment, like power generators, can be used to your advantage as they can be made a part of your assault.

Another highlight of this game is that one can use the Batmobile - Batman’s futuristic car. This vehicle can be summoned whenever needed. One can get speed boosts, perform jumps, rotate on a certain spot, break through objects such as trees and barricades, or even fire missiles when using this advanced car. The Batmobile can be upgraded with new powers through the course of the game, just like Batman.

This game is a true tribute to a great series just as Christopher Nolan Dark knight series. I first ordered the PC version during time I came to know the game Warner Bros played with PC users, I buyed a PS4 version and they helped in every manner. This game is to be played on PS4 only ,the visuals are like life and game speed is never slow in action. A must buy to all gamers like me but on PS4
READ MORE

OMG!! MY DREAM COME TRUE..
I received the Game and was in perfect condition..just have to download 6gb more after installing..nice packing.. before EDD speedy delivery..and wat else do u need HATSOFF to FLIPKART n Ekart..Thank u...
READ MORE

The Arkham knight pc game supports files are more than 30gb in size to download it from the internet which will take me 5days to download it. The game disc size was around 30gb but it installs only 7.7gb & what is the use of buying the product in flipkart, Do we have to pay for the product & pay for the internet usages? These support files should be updated in the disk itself & it shouldn't update the files on internet which was around 30gb in size. This is called the latest version. You guys...
READ MORE

Unoptimized Junk!! for the PC

Waited for this game for so long and finally was pumped n rdy to play *sigh* its A complete mess atm for PC , the performance and optimization of the game is very very bad the game is locked at 30 fps which is a shocker u can edit the ini file but even if u unlock it its useless no matter what u do the frame rate will still dip below 30fps , there is huge amounts of stuttering both in gameplay n video cutscenes . Note changing the Ini.file may cause ur game to crash constanly and mess up the ...
READ MORE

My review for the ps4 users

The makers of the game wanted to make it very conspicuous that you can use the bat mobile and they do so by involving it in every damn mission . But you will start loving the bat mobile, coz you can do a lot many things with it.

Lots of changes and improvements when compared to the previous batman games , d graphics are stunning , d story is interesting and will keep you on the edge.
It is one of the best games there is, on the PS4 right now, a game simply wouldn't be an editor's choice ...
READ MORE

Bought this game for just 999. Thankyou flipkart. The game is very good and the graphics are awesome. However the game does have some glitches which gets resolved after 6 gp update. Ps4 version is way better then the pc version since batman games are enjoyed most on 48 to 55 inch led tv
READ MORE

Well I really wanted to play this game on my pc and was really very excited but after reading all the reviews, comments I didn't get the nerves to purchase it as I though waiting for the reviews will help not pre-ordering it.
Then regardless of the consequences, I purchased this game, not directly from flipkart but from somewhere else, just the cd key for it's premium edition(yes I had to download 37.2 gb that took almost a day on my network speed) but the results were fruitful.
I don't unde...
READ MORE


Batman arkham Knight is an amazing game merely in terms of its scope and ambition boasting the return of scarecrow(who was my favourite villain in arkham asylum) and an 'original' villain after whom the game was named. This game gave me what I've come to expect from the arkham games and more.
1. Gameplay
Now the combat system in arkham city was seamless and awesome and damn near perfect. Arkham Knight has somehow taken ...
READ MORE

Awesome game!!!! Loved the packing... Great work Flipkart... Delivering well before the estimated date..... Every gamer should certainly play this game... In Arkham asylum you don't have the option to use the bat mobile.... Here rocksteady games have given you the opportunity to have a taste of that too...
READ MORE

BEST BUY FLIPKART! I preordered and got Harley Quinn Story Pack DLC Free. PLUS After two days i got and email from flipkart saying Batmobile Prototype Pack is another free DLC with the product. AMAZING FLIPKART!!! THANKYOU SO MUCH!!!
READ MORE

Batman: Arkham Knight is a single-player action-adventure video game in which you get to play as the Dark Knight himself.

As the Caped Crusader, you get to use hi-tech gadgets and weapons, such as the grapnel gun, the line launcher and batarangs, as you go toe-to-toe with some of the most despicable supervillains (Scarecrow, Penguin, Riddler, etc.) so as to save Gotham from the clutches of death and despair. You can also take the Batmobile for a spin.

Batman: Arkham Knight received a rating of 18 from PEGI. 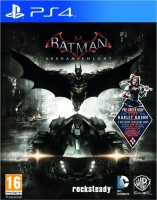 Batman: Arkham Knight is distributed in the optical disc format. This high-octane superhero game was made for the PS4 console.