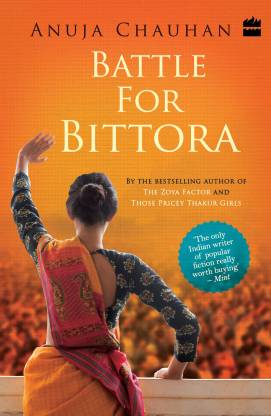 Battle For Bittora by Anuja Chauhan is the humorous and gripping story of a political battle in the dusty hinterlands of India where a love story threatens to play spoilsport.

In Battle For Bittora, Jinni, all of twenty five years, works in a cool and happening animation studio. She is content being independent and carefree till her grandmother Pushpa Pande turns up all of a sudden. The catch? Jinni has to leave for their hometown of Bittora to contest for a seat in the upcoming elections to the Lok Sabha! In spite of all her resistance, Jinni gets caught up in a whirlpool of emotions, sensations and unexpected experiences. As Sarojini Pande from the famous Pavit Pradesh Pande dynasty, she has to wear cotton saris, deal with corruption, allegations of nymphomania and nerve wracking heat. Battle For Bittora pits former royal Zain Altaf Khan against Jinni who is drool worthy but extremely idealistic.

Battle For Bittora brings Jinni to an unfathomable climax of sorts when her childhood sweetheart Zain comes into the picture. Even though Jinni is swarmed by sycophants and election aides, she rediscovers her attraction and love for Zain. The dusty and hot lands of Bittora form an unconventional backdrop for their blossoming love story. However, each of them tries to outsmart the other in their race for power. Battle For Bittora is Indian to its very core and displays politics and its rotten underbelly in a light handed manner. Special mention must be made of Pushpa Pande who keeps readers laughing throughout the novel with her brand of accented English or Hinglish. Anuja Chauhan’s book stands out for its mischievous sense of humour and its tantalizing romanticism.

Anuja Chauhan is an advertiser, author and screenplay writer. Anuja Chauhan has also written The Zoya Factor and Those Pricey Thakur Girls. Born in Meerut, Uttar Pradesh, Chauhan attended Sophia Girls Convent in Meerut, Army Public School and Delhi Public School in New Delhi. She has a Bachelor's degree from Miranda House in Economics and a Mass Communication post graduate diploma from the Royal Melbourne Institute of Technology. In 1993, Chauhan joined JWT, and became vice president at the age of 33. She resigned as executive creative director and vice president from advertising major JWT India to embark on a full time writing career in 2010.

She has been featured in the Ten Hottest Indian Creative Directors list by The Economic Times and been a part of the One Show Jury in 2011. She has won the India Today Woman as Storyteller award and the Cosmopolitan Magazine Fun Fearless Female award. Her screenplay credits include Patiala House and Guppie - Mein Liar Nahi Shayar Hoon. Anuja Chauhan has best selling ad campaigns to her credit like Oye Bubbly and Yeh Dil Maange More for Pepsi and has worked with a slew of brands like Nokia, Mountain Dew and Kurkure. 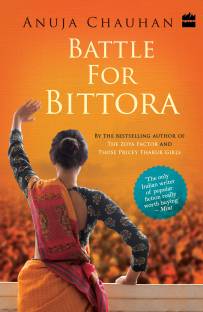 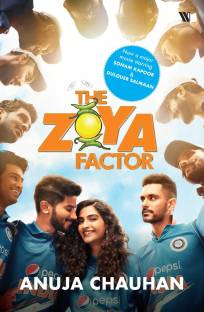 I would give this a five star!The incidents are hilarious and laugh-out-loud funny. The electioneering is very real too. Very few books manage to keep the reader so thoroughly entertained. If you are not much into chick-lits, dont be put off by the chick-lit - romantic sounding blurb. Its far more than just another romance novel. The liberal use of 'hinglish' may be a slight put off, so if you dont know hindi, you may be at a disadvantage.
I rate this higher than 'The Zoya factor' for its hu...
READ MORE

The simple language used by the author makes it a like-able book. The character of Jinni is portrayed beautifully and the bitter-sweet love affair between Zain and Jinni adds the required spice to the story.

The story is simple with very little twist and turn. The story has its ups and downs and sometimes the story-line feels flat, but overall its an enjoyable read. Kudos to the Author for bringing humor to a boring topic like politics.
READ MORE

Its a lovely book.. I had read chauhan's zoya factor long time back and it was superb and recently I read " those pricey Thakur girls " the only book of hers I could not get to read was battle for bittora i finally got to buy and read it and it is total fun read which usually anuja chauhan books are...

looking fwd to get hold of "The house BJ built " soon.. can anyone tell me when its going to be released ;)
READ MORE

I have read all Anuja Chauhan's novels and have fallen in love with all of them. Her writting style is super awesome coz u dnt feel like keeping the book down for even a sec.I am eagerly waiting for more of her books.
READ MORE

One of my best ever reads!

This is such an amazing book. So well written and the characterisation holds true indian sort of touch.
Talking about Jinni and Zain, they're amazing! I personally got this because I heard about a Fawad Khan-Sonam Kapoor movie was to be made on it which got cancelled later. But I am so glad I read this book! Totally smitten by Anuja Chauhan's writing and explaining skills. Plus this is a true Indian book as I would say! A joyous read overall!
READ MORE

I enjoyed the book. The first 30 pages were boring....Actually the story paces up from the 31st page. The story was hilarious. And anuja chauhan has become my fav author. The ending was quite abrupt....Finally, I would recommend this book to all who want to try comedy genre in POLITICS.
READ MORE

An easy to read and entertaining story line from Anuja Chauhan.
This book was nice, but if you compare it with her other two books, Personally, I feel, they were much more entertaining.
Regardless, this was again a nice and easy read from a fantastic Indian author. Keep writing, looking forward to more!
READ MORE

I would definately give this book a 5 star.Equally good as the first one.Simple and great language makes it really good to read.Totally enjoyed the novel spclly the english tones of Amma.."life is sort sarojini.".................luved it
READ MORE

Just like The Zoya Factor, Anuja Chauhan's second book is funny, witty, realistic and has a nail-biting end! You can totally relate to the characters and the settings. Also, the male lead is HOT!! (always a bonus :P)If you're a fan of chick lit, then you won't be able to put this book down.
READ MORE

Good read...but not as great as her first one

I bought this book since I had read Anuja Chauhan's first novel 'The Zoya Factor' and had extremely loved it. Though I don't want to say that I was disappointed with her second, this novel is a good read, if not that hilarious and fantastic as her first one.
READ MORE

0
0
Permalink
Report Abuse
+
All 19 reviews
Have doubts regarding this product?
Safe and Secure Payments.Easy returns.100% Authentic products.
You might be interested in