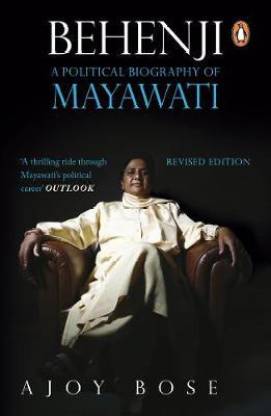 Get notified when this item comes back in stock.
Home
Books
Biographies, Memoirs and General Non-Ficton Books
Memoirs

This revised edition of Behenji, first published in 2008, examines Mayawati’s record as chief minister since 2007. It pinpoints the reasons behind the BSP’s poor performance in the 2009 Lok Sabha polls, her return to the Dalit agenda prior to the 2012 assembly elections, as well as its surprising results. Also scrutinized are Mayawati’s performance as a dalit leader and administrator, besides the rampant corruption and failure of her social engineering project during these years.

Though no longer likely to become prime minister, the author sees Mayawati playing a pivotal role in UP, and, indeed, Indian politics post the 2014 elections.

book presents a fair treatise of bhenji's journey from rags to riches.. it also separates the dalit movement ignited by kanshi ram & associates from mayawati's later political maneuvering to survive in complex political world ...
the book however was missing the personal views of mayawati and kanshi ram regarding various socio politico issues... which could have satisfied the appetite of reader !!
A delightful read and perhaps most complete treatise of Behnji till now..grt work
READ MORE

Great book. one should read to know how she came to this place and then comment on her.Iron Lady Mayawati and future PM .

I salute her.
READ MORE

This is Ajoy Bose's magnum opus!!
His choice of topic for this book is thrilling.

Mayawati the leader or queen of corruption.I don't know how this illiterate people becomes C.M.She is in the merit list of the most the most corrupt regime ever.Because of this bad politics our india has been divide into so many caste that they are playing main role in destruction of our country.How fool are the citizens of U>P that they select people like this.If i get a chance i will like to throw my leather shows on her face..
READ MORE

0
12
Permalink
Report Abuse
+
All 4 reviews
Have doubts regarding this product?
Safe and Secure Payments.Easy returns.100% Authentic products.
You might be interested in