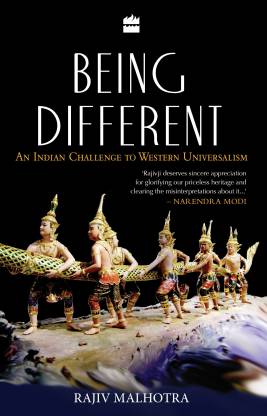 Being Different: An Indian Challenge To Western Universalism analyses the differences between Western and Indian cultural ideologies, and the impact of each civilization’s understanding of the other.

Being Different: An Indian Challenge To Western Universalism, published in 2011, is a book that shifts India’s position from being the observed to becoming the observer. The author compares the Western civilization and the Indian civilization, and takes an in-depth look into the beliefs of both cultures. India, with its diverse traditions and spiritual beliefs, is a kind of society that was not under the dominant western culture. However, in modern times, mainly due to globalization, India is losing its distinctive culture, along with it the potential it holds.

Malhotra says that India’s cultural and spiritual beliefs are rooted on the principle of dharma, which does not exist in the West. Being Different: An Indian Challenge To Western Universalism illustrates how the Indian society is comfortable with diversities, whereas the Western society is not as welcoming. The book also shows how dharmic traditions focus on the inner self, whereas the Judeo-Christian beliefs are based on particular individuals and places. Readers will also learn that the western perspective demonstrates that there are separate essences for God, human souls, and the world. In contrast, Indian faith says that everything emerges from the same source. The author also explains how chaos is seen as a positive entity by Indians, whereas the western world believes in strict order. Unlike languages that have originated in the west, Sanskrit’s basic sounds are connected to the objects they represent.

Being Different: An Indian Challenge To Western Universalism explains how the world needs to focus on multi-civilizations, rather than just on western universalism. This book challenges beliefs, and says that mutual respect between different cultures is required, instead of just tolerance. The book is refreshing, and unlike most books in this genre, it is not difficult to comprehend.

Rajiv Malhotra, born in 1950, is an Indian-American author, philanthropist, entrepreneur, public speaker, and management consultant.
His works include Vivekananda's Ideas And The Two Revolutions In Western Thought, The Axis Of Neo-Colonialism, Breaking India: Western Interventions In Dravidian And Dalit Faultlines, and India And Globalization.

Malhotra is an alumnus of St. Stephens College, New Delhi, where he was a student of Physics. He then joined Syracuse University to pursue Computer Science. The author has worked in IT and media firms, and retired at the age of 44. In 1995, he started the Infinity Foundation and is currently its Director. His writes about current affairs, Indian culture, world religions, and cross-cultural encounters. He is a prominent blogger, and blogs for Outlook India, Huffington Post, and Rediff.

An Indian who's not read this is not a true Indian!

If we really want to realize our motherland India and its greatness as compared with mimicking of the west that Nehruvian India does since past 60 years, one cannot live without reading this masterpiece that:

1. Is the essence of 15-20 years of indepth global research
2. Is authored by a man who donated Rs.200 cr. (in 1994) worth of business wealth to dedicate his life to this sole cause

Go right ahead, buy it and you will love India all the more, nay be proud of it!
READ MORE

The legacy of the British Rule is that we Indians especially social scientists and philosophers think like the westerners. We use western categories, models, theories and perspectives to look at our selves. Our culture, society, religion, our problems etc are analysed by ourselves from the point of view of the west. In fact our policy makers, politicians, social activists all are trying to transform our society and culture in the direction of the west. Rajiv Malhotra a true modern Maharishi s...
READ MORE

A must for every Hindu, especially "english educated and confused" lot.

This book is a must buy for every Hindu, especially "english educated/confused" lot. Rajiv ji made a strenuous effort in coming up with this book. The cover rightly depicts the deep "manthan" he did to present the arguments in his book. Appendices are also a compelling read to understand the integral unity of Dharmic traditions. With christian/western appropriations of Hindu concepts and spiritual methods, the importance of Sanskrit non-translateables can never be over emphasized. A major ins...
READ MORE

Rajiv Malhotra traces the ills of indian society to some roots and points out the many commonly held fallacies that we, educated under the Macaulay system, have often had doubts about, but never knew whom to ask.

Highly recommended for free-thinking individuals who wonder why is India, and specifically Hinduism, only about casteism, cows and corruption, like none other country.

Be careful this book has the ability to turn you into a "Hindu Nationalist" unless you take precautions.
READ MORE

font size is excellent and page quality is great and no need to say about content it's astonishing and mesmerizing. the author Shri Rajiv malhotra ji has done a great research for writing this book.
READ MORE

A very good book. Must read for people interested in indian culture and its deep values and its influence on rest of the world.

If you are indian you must read this book. rajiv malhotra clearly explained digestion of one civilization to another, western universalism , integral unity of dharma and many more in an unbiased way.
READ MORE

A must-read for all Indians

This book gives a beautiful narrative of how Hinduism and other religions of Indian origin differ significantly from the religions of Middle Easter origin. It is important for all Indians, irrespective of their religion to read and understand this book. It will give a good platform root to which one can have fruitful interaction with the Western culture.
READ MORE

As everyone know Rajiv ji at his best in these books .I would like to recommend this book for every patriotic Indian
READ MORE

Excellent mind-blowing and thought-provoking book on conflict between Sanskriti and Western ideologies.
----
Every English educated Indian should read this or view the videos to understand him/herself and Sanskriti. Knowing oneself and how others see us is very important to maintain one's cultural Identity in this Western dominated world.
---
[World view of a culture] :
The West expends a lot of Energy and Resources by maintaining various deptarments with "experts" on different cultures. The...
READ MORE