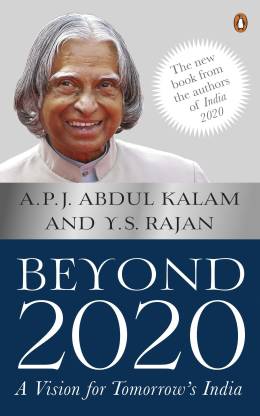 Beyond 2020 chronicles the progress India has made in the past century and the areas in which we have to work on to become one of the top economic powers in the world.

Beyond 2020: A Vision for Tomorrow's India provides an incisive look into how much India has achieved in the last few years and what lies ahead, to become of one of the top five economic powers in the world by 2020. In 1998, Dr. Kalam and Y. S. Rajan came up with India 2020, a vision document that charted out the ways in which India could become a developed country by 2020. As the year 2020 approaches, Dr. Kalam revisits the book to take a stock of how much our country has progressed and the things left to achieve. India’s growth had slowed down in the 21st century because of several missed opportunities and delays in project execution. Dr. Kalam comes up with a renewed policy focusing on agriculture, manufacturing, mining, and healthcare industries. Beyond 2020 presents a plan of action that will help India transform into a developed country in the near future.

Avul Pakir Jainulabdeen Abdul Kalam is an Indian scientist and administrator. He served as the 11th President of India from 2002 to 2007. Born and raised in Rameswaram, he studied at the St. Joseph's College, Tiruchirappalli, and completed his Aerospace Engineering at the Madras Institute of Technology. Before his term as President, he worked as an aerospace engineer with DRDO and ISRO. He is popularly known as the 'Missile Man of India'. He has received several prestigious awards, including the Bharat Ratna, India's highest civilian honor.