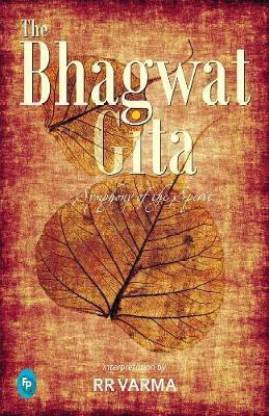 The Bhagwat Gita: Symphony of the Spirit is R. R. Varma’s interpretation. The land of the children of Bharatha watched in quiet, as the familes of Pandu and Dhritarashtra clashed in battle in Kurukshetra for eighteen days. And just before the battle, Arjuna, one of the Pandavas, found himself crippled with fear and doubt, questioning his own values and morale. The Bhagwat Gita contains the words of wisdom of Sri Krishna, the Supreme Personality of Godhead, as he explains that not fulfilling one's Dharma is the greatest sin.

The Bhagwat Gita, the Song Divine, is revered as one of the foremost treatises on philosophy and Dharma. In its 700 profound verses, one can find the answer about life, the universe and the reason of why human beings are constantly put through birth and death cycles. Liberation, Krishna explains, is attained by those who uphold Dharma. Arjuna's Dharma was to kill and reinstate his family as the rightful rulers of Hastinapura. Krishna explains that man's repeated failure to uphold his Dharma is why he manifests himself, time and again, to set right the path that humanity strays onto – dharma samsthapanarthaya sambhavami yuge yuge. Bhakti Yoga, Gyan Yoga and Karma Yoga are said to be the paths to reach the ultimate. An inquisitive examination of the ethical and moral struggles of man, the Bhagwat Gita is the sum total of man's greatest duties, and his worst fallacies.

R. R. Varma is an Indian writer and author. His spiritual books have been widely read as his perspectives are profound and insightful. He is associated with Prakash Books and has also authored the book Dynamics of Yoga: A Combination of Science and Spirituality.

I cannot believe this

The author has so much to say. so much to say about each and every line that your head explodes. tHIS IS SUPPOSED TO BE A BOOK and not a novel where you can write like blah blah blah. again , these are my opinions and i felt bad after reading the book and will have to order again now. Author p.lal is recommended.
READ MORE

I don't no
READ MORE

There are other versions which are much better.
READ MORE