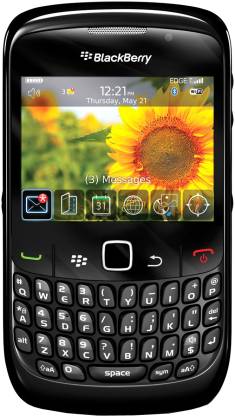 Sold Out
This item is currently out of stock
Warranty
1.5 Year for Mobile & 6 Months for Accessories
Highlights
Easy Payment Options
View Details

Description
The BlackBerry Curve 8520 is an entry-level RIM mobile that runs the BlackBerry OS. The 8520 comes with several powerful business functionalities like Push mail, well spaced QWERTY keyboard and excellent connectivity features. The BlackBerry 8520 is powered by a 512 MHz processor that is optimised for minimal power consumption.

The chassis of the BlackBerry mobile is a combination of high quality plastic and rubber, which renders it extremely sturdy premium feel. The 35 concept full-QWERTY keyboard, coupled with the touch sensitive Optical Trackpad, allows error-free typing and seamless navigation. The Curve 8520 measures 109 x 60 x 13.9 mm and weighs 105 g, making it slimmer and lighter than the previous Curve handsets.

The Blackberry 8520 supports GPRS, EDGE, Wi-Fi and Bluetooth connectivity options. A micro USB port on the lower spine allows data sync and charge. The dedicated multimedia keys on the 8520 lets you pause music, skip tracks, or set a song on repeat. RIM has also included a handy one touch mute button on the Curve 8520.

The Curve 8520 features a media player that supports eAAC+ and MP4 formats. The 3.5 mm jack lets you plug the mobile into your car stereo or any generic headphone. Other features in the BlackBerry phone include SMS, MMS, voice dialing, personal organizer functions and LED call indicator.

Hey frnds,
I bought this phone from Flipkart, got it in just 2 days.
Presently I am using it and the best feature of this phone is the voice quality. The push mail service is awesome.
The track pad is quite smooth , don't know about the other blackberry phones but like it. I got little pain in getting synched with my earlier phone but after some surfing I got it fixed by synching it using gmail account.
Didnt used the app world because of the shitty services of Airtel.

Practicality of a blackberry

If you don't own a blackberry already, and are in the market for buying a new smartphone, you generally start out by comparing its specs with android phones in the same range to check for the wide range of apps that you can run.
But people, then you are missing out on what a phone should be for.
Its not a PlayStation portable or a media center or a replacement for your girlfriend/boyfriend using some of those cheesy apps.

First let me tell you that this is not just another phone in the market. This is a Blackberry that brings with it style and status quotient. Curve 8520 is an entry-level BB phone with almost all features that can be found in top-level BB. It is worth every penny of its cost!!

A matter of choice

Unlike Android & Symbian based phones , This phone is not meant to entertain you . Blackberry , from the get go , has targeted the business class costumers . By this , I mean the one's who want to make the most out of their phone for official works & tasks other than entertainment .

If u want your phone to entertain you , I would advice that you don't go 4 this phone .

Nokia E5 offers much more at the same price

I am using BlackBerry Curve 8520 and Nokia E5 and I find E5 a better phone. GPS in Nokia E5 works great and has many times helped me to find the way but BB 8520 does not have GPS. In Nokia E5 you can edit word documents and rename the documents and create new word files. In E5 pdf files can be viewed clearly. In BB 8520 you can not create new word documents. pdf files can be viewed but the quality of the view is very poor. It's inbuilt memory is too small. The worst part is the availability o...
READ MORE

First thanks to flipkart for delivering within one working day and blackberry is the only piece which is known for the unique security features....It is known for the best sound quality and the excellent application support....
Pros: Best price for the multifeatured brand.
Unique security(VPN,Internet) features
Excellent trackpad and keypad with very smooth functioning
Excellent camera clarity.

Cons: Once applications are installed,there is issue of hanging the piece
Trackpad sometimes will ...
READ MORE

well i personally bought it for just showing off purpose...coz a bb is not that useful anyways...positive aspects of the phone are that it has a very nice camera...comparing your nokia, samsung 2MP cameras and a BB 2MP camera...BB was thumbs up, speakers are pretty impressive(very loud), internet surfing is quite fast provided on a wifi network.
Negative aspects include: no 3G(although it is an older model what can we expect), nd u need to have BIS(blackberry internet services) for IM and mai...
READ MORE

its a great phone the keypad is the best feature of this phone, i.m's work great. however certain applications are a bit slow but too much shouldn't be expected at this price range. browsing speed is excellent for a 2g phone. Screen clarity is awesome.
READ MORE

My first (Sort of) Smart phone

I have got my blackberry curve 8520 for over a year now, and i thought will talk about just advantages and some problems this phone has given me.

On the plus side first.
1. Extremely great placement of keys
2. Touch pad is the best in the industry
3. Blackberry menu and navigation is extremely easy and well laid out
4. Good reception and sound.
5. The email function look feel and ease of type is unmatched.
6. I am a rough user and the phone has dropped a large number of times, with no proble...
READ MORE

This is a simple, robust well performing phone for those who wish to talk and send email. If you wish to all the fancy stuff then you are looking in the wrong place. But give me this any day over all the touch screens when I want a feel of them ol' fashioned keys to be able to send messages without looking at the keyboard.

Since I carry 2 phones, 1 to speak & message and 1 to game/ surf/ watch videos/ etc., I think this phone plays its role perfectly as the former. I bought this to replace m...
READ MORE

1
0
Permalink
Report Abuse
+
All 43 reviews
Have doubts regarding this product?
Safe and Secure Payments.Easy returns.100% Authentic products.
You might be interested in