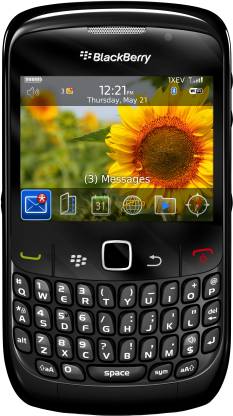 Description
Research In Motion is expanding its line of BlackBerry Curve phones and the BlackBerry Curve 8530 is one of them. The handset is a CDMA phone with a QWERTY keyboard. This CDMA handset does not have a separate SIM card slot. The small buttons on the keyboard has a fair amount of space between the keys which allows faster typing. The phone is powered by BlackBerry OS 5.0 with a 528 MHz processor which enhances the performance of the phone. The Curve has 2.46-inch TFT LCD screen which deliver pictures at resolution of 320 x 240 pixels.

A 2 megapixel camera with 5x digital zoom and video recording capabilities is sported by Blackberry Curve 8530 smartphone. You can fine tune the photos with the help of white balance and add colour effects. The smartphone also offers Geo-tagging photos. The videos can be recorded at a resolution of 320x240 pixels.

The BlackBerry Curve 8530 has a lightweight and compact design. The handset has a touch-sensitive optical trackpad, which helps the user to navigate features on the mobile. The Curve has a rubber covering on the edge of the phone which creates an easier grip for the user. The keyboard is designed with small plastic keys which makes typing easy. The handset also features dedicated music keys which helps you to change tracks without going to the menu.

The Curve 8530 has an internal memory of 256 MB which can be expanded up to 32 GB using microSD, microSDHC cards. The phone is powered by Li-Ion 1150 mAh battery. When fully charged, the Blackberry Curve 8530 gives a talk time up to 4 hours and a standby time up to 252 hours.

The BlackBerry 8530 offers Internet browsing capabilities through 3G and Wi-Fi. You can download email attachments quickly and make use of the Push-mail facility. The phone has a microUSB port for charging and PC synchronisation. The Bluetooth connectivity lets you to exchange important data from other devices. Other features like BlackBerry maps, Document viewer and Predictive text input are also available in the phone.

Along with this, the game enthusiasts can also play and download games of their choice. The handset provides messaging features like MMS, Instant Messaging and SMS (threaded view). A-GPS helps you in navigating to the desired location. Blackberry Curve 8350 also offers Group Connect, permitting it to set-up group conversations among your friends.