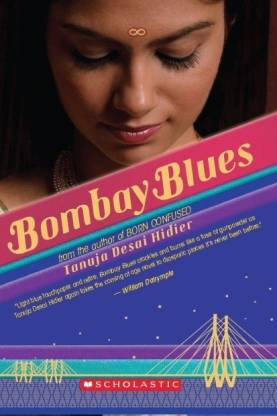 Long awaited, anticipated, likely to be debated: Dimple Lala is back. [Desai] Hidier quietly revolutionized YA literature with Born Confused (2002), and this sequel indicates she’s intent on a repeat… Dense, lyrical, full of neologic portmanteaus and wordplay (“magnifishence”; “candlecadabra”): This is a prose-poem meditation on love, family and homecoming … A journey worth making.”

“Light blue touchpaper and retire: Bombay Blues crackles and burns like a fuse of gunpowder as Tanuja Desai Hidier again takes the coming of age novel to diasporic places it’s never been before.”

Dimple Lala thought that growing up would give her all the answers, but instead she has more questions than ever. Her boyfriend is distant, her classmates are predictable, and a blue mood has settled around the edges of everything she does.

It’s time for a change, and a change is just what Dimple is going to get — of scenery, of cultures, of mind. She thinks she’s heading to Bombay for a family wedding — but really she is plunging into the unexpected, the unmapped, and the uncontrollable. The land of her parents and ancestors has a lot to reveal to her — for every choice we make can crescendo into a jour¬ney, every ending can turn into a beginning, and each person we meet can show us something new about ourselves.

Tanuja Desai Hidier is an author/singer-songwriter born and raised in the USA and now based in London. Her first novel, Born Confused – the first-ever South Asian American coming of age novel, was named an American Library Association Best Book for Young Adults and became a landmark work. The heart of Born Confused is about learning to bring two cultures together without falling apart, yourself, in the process.bThe long-anticipated sequel, crossover / adult novel Bombay Blues, deemed “a journey worth making” in a starred Kirkus review. Born Confused, that turned its author, Tanuja Desai Hidier, into a chronicler of the chronic identity chaos that affects the desi diaspora.