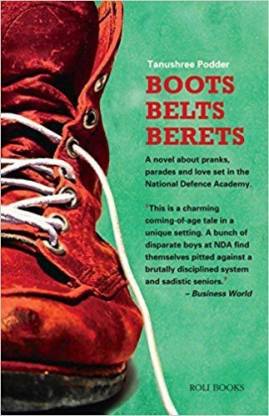 Boots Belts Berets is a tongue-in-cheek book about life in the National Defence Academy.

The NDA makes men out of boys. There is adventure, there are thrills and quite a bit of danger as well. However, there is little by way of women. Nikhil, Bertie, Randy and Maachh discover this as soon as they enter the NDA after 16 years of a sheltered life. They soon learn that there is more to the NDA than meets the eye. Ragging, abysmally difficult training regimen and adventure apart, there is also the compromise of camaraderie, the memories of imaginary girlfriends and the lies of lust which could make grown women blush to soften their muscles and salve their wounds. In this hilarious story of life in the NDA, be prepared to serve your country, or at least laugh yourself to death in the attempt.

Tanushree Podder is an Indian writer and former management professional. She is also known for: Nurjahan’s Daughter and Escape from Harem.

Tanushree has written often for newspapers, offering witty editorials and write-ups about anything which has amused her over the years. She enjoys writing humorous pieces and sometimes dabbles with non-fiction. 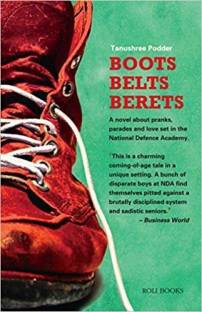 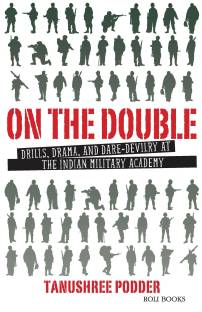 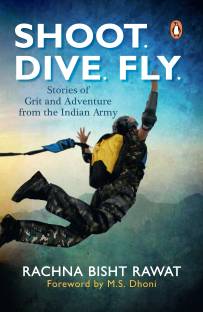 never read a book like this . I felt like I am in the squadron of NDA and all those pranks and ragada seemed quite interesting . can't wait to join the academy.it has become my favorite book among the top 10 list in life .
READ MORE

this could be the best book, if you are really interested in the life of cadets AT NDA, it gives you a clear insight of the academy, i enjoyed reading this book very much. i would suggest to every teenager to read it once.
READ MORE

This book is the book what i needed for so long . It is awesome , fantastic , extra-ordinary. I love to read military novels , military legends and everything related to military. i must say this is materpiece .
READ MORE

Nice book, gives an insight about NDA....:) i bought this book to know about the life inside defense academies and this book does it. I feel the writer could have ended the story well, good author, good narration, very good book for all defense aspirants. read it.... Perhaps waiting for the life inside IMA from this author.
READ MORE

Fantastic book on the life inside the national defence academy!! A must read book for all youngsters who wants to be inside the nda !!!
READ MORE

IT INDEED IS A FUN , THOUGH AT SOME PLACES ITS QUITE PREDICTIVE AS WE HAVE READ SO MANY BOOKS OF SUCH TYPE BT EXPERIENCE OF NDA n some uniqueness of this institution made the book adiictive to finish in one go
READ MORE

0
0
Permalink
Report Abuse
+
All 44 reviews
Questions and Answers
Q:Is it better than SHOOT. DIVE. FLY
A:It is a good book as per a defence aspirant perspective. Any book can't be compared with any other book. Definitely i will suggest you to read this book as i have completed the whole book in just 24
Anonymous
Certified Buyer
3
0
Report Abuse
Didn't get the right answer you were looking for
Safe and Secure Payments.Easy returns.100% Authentic products.
You might be interested in