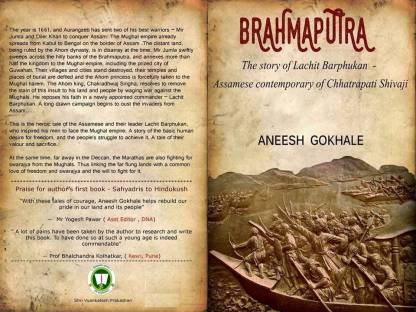 Description
The year is 1661, and Aurangzeb has sent two of his best warriors – Mir Jumla and Diler Khan to conquer Assam. The Mughal empire already spreads from Kabul to Bengal on the border of Assam .The distant land, being ruled by the Ahom dynasty, is in disarray at the time. Mir Jumla swiftly sweeps across the hilly banks of the Brahmaputra, and annexes more than half the kingdom to the Mughal empire, including the prized city of Guwahati. Their villages and cities stand destroyed, their temples and places of burial are defiled and the Ahom princess is forcefully taken to the Mughal harem. The Ahom king, Chakradhwaj Singha, resolves to remove the stain of this insult to his land and people by waging war against the Mughals. He reposes his faith in a newly appointed commander – Lachit Barphukan. A long drawn campaign begins to oust the invaders from Assam….. This is the heroic tale of the Assamese and their leader Lachit Barphukan, who inspired his men to face the Mughal empire,. A story of the basic human desire for freedom, and the people’s struggle to achieve it. A tale of valour and sacrifice. At the same time, far away in the Deccan, the Marathas are also fighting for swarajya from the Mughals. Thus, linking the far flung lands with a common love of freedom and swarajya and the will to fight for it. *******************************************
Read More
Specifications
Ratings & Reviews
4.6
★
39 Ratings &
5 Reviews
5

I was introduced to heroics n exploits of Lachit from a Twitter user ScorpiusMaximus. I have researched about this great general of Shims well in advance. Coming to the book, the author brings to life all the events that led to the great Battle of Saraighat. The narration brings the battle to life once again. Overall for all history buffs this is a must read book.

For those who wish to know how India has honored such a great General- the best cadet at NDA, Pune is awarded Lachit Borphukan me...
READ MORE

The almost-unknown story of Lachit Borphukan, the Ahom warrior who stood up to the mighty Mughals, flows as smoothly as the Brahmaputra itself, with the author interspersing historical fact with a vivid Amar Chitra Katha-like narrative, says Amlan Jyoti Hazarika


The name may not ring a bell for most outside Assam, but the story of Lachit Borphukan, a great warrior and a co...
READ MORE

Our country is united by the great acts of courage shown by our great Heros, and this book is a proof of it! It's a link between India's far East and West-
between Lachit Borphukan and Chatrapati Shivaji- between the reader and the writer ! Mr Aneesh Gokhale has done extensive research on Axom's Ahom dynasty and its visible in description of the historic Battle of Saraighat in which Assamese soldiers , under the leadership of Veer Lachit Borphukan, fought bravely and defeated the mighty Mogh...
READ MORE

Appreciate the effort put in by the writer. Al though i was expecting this book to be more informative but content is good.
READ MORE