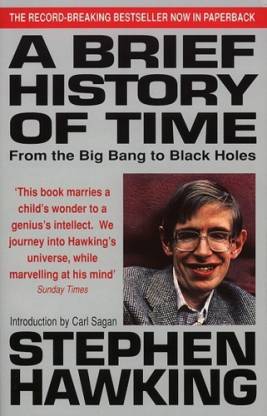 A Brief History of Time, authored by the legendary theoretical physicist Stephen Hawking, is considered to be the holy grail of populalizing scientific writing and ever since it was published for the first time in 1988, the book has been an ultimate guide to both scientific and non-scientific communities searching for answers to the most fundamental questions.

Unarguably one of the greatest minds living on the planet, Stephen Hawking takes the reader to a breath taking journey into the depths of cosmos from big bang to big crunch, from nature of forces to the corners of multiple dimensions, from quarks to the entangled theory of strings, through the wormholes, encircling event horizons, along the arrow of time and ultimately leaving him on the edge of the universe with his ideas on the grand unification of forces – the theory of everything. Hawking being a brilliant physicist draws a stunningly simple anatomy of intricate nature of the universe through an elegantly written language of physics and mathematics and thus making even a non-scientific person understanding some of the most important aspects of working nature of the cosmos. By stimulating the existential inquisitiveness of the reader, A Brief History of Time not only awakens his interests in physics, cosmology, and particle physics but inspires the natural philosopher and the historian in him. Following the legacy of an elite bunch of people such as Kepler, Copernicus, Einstein and Sagan who brought science of universe to the general public, Hawking successfully attempts in bringing topics of black holes and wormholes to the tables of cafeterias and public media. A Brief History of Time is timeless in its own nature and deserves to be read by anyone who has a curiosity to know the origin and fate of his or her own existence.

Stephen Hawking is considered to be one of the greatest living minds existing. Born to an English family on the 300th death anniversary of Galileo, Stephen Hawking has his alma mater in the Oxford and Trinity Hall, Cambridge. After an extensive work in physics and cosmology, in his early age itself he was showing a great potential in becoming one of the leading scientists in the field. When he was 21 he was diagnosed with Amyotrophic Lateral Sclerosis, a progressive motor neuron disease which destroyed the ability of his muscles to move and respond. It deteriorated with time and resulting in losing almost complete capability to move his body, but his brain continued to marvel with his extraordinary theories and thoughts. In 1974 he stunned the scientific community with his thesis on black holes, now famously called as Hawking Radiation.  In 1979 he was honored with the Lucasian Professor of Mathematics at Cambridge, which has been the epitome of all the scientific achievements. Even though he had reached a state where he needed a computerized speech synthesizer to articulate his thoughts, he wrote the magnum opus of science, A Brief History of Time which has sold more than 10 million copies. He currently holds the position of Director of Research at the Centre for Theoretical Cosmology within the University of Cambridge. Few of other books authored by him are The Universe in a Nutshell, The Grand Design, My Brief History, The Theory of Everything and The Nature of Space and Time.

Universe in the palm of your hand

William Blake, in his "Auguries of Innocence" wrote

To see a world in a grain of sand,
And a heaven in a wild flower,
Hold infinity in the palm of your hand,
And eternity in an hour.

This maybe considered as nothing more than a very good imagery built by words. But this book helps you to hold 'infinity in the palm of your hand' and 'eternity in an hour'.

It is suggested that you have a 'basic understanding' of Science (Particularly, Physics) if you intend to take this book seriously (You w...
READ MORE

"A Brief History of Time" in brief

dr.stephen hawkins a wonderful astrophysicist and professor in cosmology department of cambridge university wrote it along with carl sagan writer of books like "cosmos by carl sagan"this is a wonderful worth reading book for all ages....
coming onto the book----
from time immemorial people have been wondering about-"what is universe?","what is time??","what is its limit??","how it all started???","who maintains and controls it??" & so on.....
this particular book answers it all.this is also ...
READ MORE

Ohhhhh this book is really cool. It is knowledgeable and helps to understand the higher concepts which are pretty cool . The content is nice and language is understandable. I just love this book. And I'm a great follower of sir Hawkins. May my feedback like by u and this book would be spreaded to all young scientists
READ MORE

First of all I thank Stephen Hawkings for writing this wonderful book. I have never seen a science book as simple as this. Its truely great. He has explained nearly everything except the theory of everything which he has left to us, the younger generations to uncover it. This book really tempts me to take a career of science. I cant express how easy it is. From Ptolemy to Himself, he has explained the evolution of science step by step.
The book is such a fine piece that everyone should buy.
T...
READ MORE

I think it is a must read book for people who are enthusiastic and curious about science (mainly physics). Believe me, after reading it completely you will question a lot of things in the universe....

Features of the book :

after all a masterpiece by a great mind !

Amazing book by Stephen Hawking. I salute him . He was a great scientist. I recommend this book to those who love universe
READ MORE

this is one of the best book of Stephen Hawking. explaintion is so easy to understand. I think it is best for science lover's 😊😘😍
READ MORE

i think so this is the best book to be gifted to the class 7-9 children to develop their interest in science and research Awesome book by great cosmologist . Even dead he will be immortal for us in our minds hail Hawking!
READ MORE

Very quick delivery by flipkart.. The binding quality is good and the book is awesome... Excellent work by hawking sir... You don't have to be a scientist to understand it... Overall It's a must read book for space lovers... At the top, I thank flipkart for these services
READ MORE

This book covers the evolution of thinking about the universe from aristotle era to the great einstein era by the introduction of famous general theory of relativity and the quantum mechanics to search for a special theory that can fill the gap between those two theories-"THE THEORY OF EVERYTHING". Hawking has described those giant complex theories like a simple story. Really a great work from 'one of the most brilliant scientific minds since einstein' !! 😇😍
READ MORE