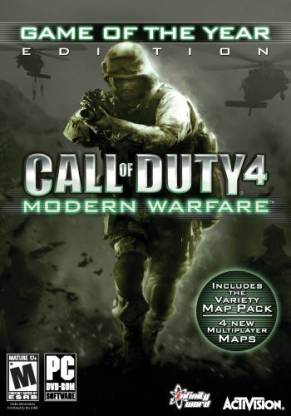 Call of Duty 4 : Modern Warfare (Game Of The Year Edition) (for PC)

Call of Duty 4 : Modern Warfare (Game Of The Year Edition)  (for PC)

With deep-rooted action sequences and an engaging storyline, the Call of Duty 4: Modern Warfare is one of the most popular titles of the Call of Duty series to catch the imaginations of FPS gamers. This game has been developed by Infinity Ward and Published by Activision.

Featuring an intense and cinematic action experience, this shooter game can be played on single-player and multi-player modes.

Set in the most dangerous parts of the world, you are to take on the terrorists as a U.S Marine or a British S.A.S soldier. With a storyline full of twists and turns, the players use lethal weapons and superior firepower on the battlefield. This FPS game features deep-rooted action sequences and thrilling situations. The game arms the players with modern arsenal, including powerful missiles, fighter planes and tanks.

The game of the year edition of Call of Duty 4: Modern Warfare is a great choice for COD fans and FPS enthusiasts and is playable on PC.

The game has an M for Mature rating by ESRB due to all the war simulations it depicts. 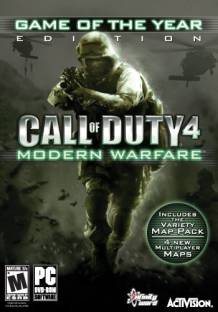 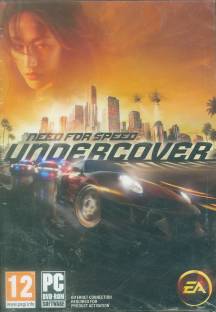 It's a good game it's installation is very fast very low space required to play this game this game is cool even you don't need direct x of this game this is fantastic game .
READ MORE

First the product was delivered very early and the service was great.. Next the game is awesome.. I can't tell you how it feels to play this game, I always play this game . You should buy this game...... Trust me u will have a great feeling......No installation issues... It installs within 7 to 8 minutes and you have to put the cd into cd drive to play single player and in multi-player first it will say that it had stopped working..... But then go to control panel_sound_enable the multi ste...
READ MORE

this game has best story and the most important thing is its MULTIPLAYER !!!! Tons of fun in multiplayer .... Delivery was before the time expected and was nicely packed . THUMBS UP FLIPKART :)
READ MORE

Personally I am a huge fan of Medal of Honor Series but anyways Its a great Game, with good Graphics.
Till now I have not played too many missions but yet I have enjoyed the journey so far. Great weapons, great co-op tactics, a complete package to play.
Any MOH fan will surely enjoy this playing.

I have played both the modes that are Single player and Multi player.
No problems with Single player so far, but 1 thing I noticed with Multi player is that it doesn't have any crosshair to Aim your...
READ MORE

call of duty on windows 7

Hi Simar, this game works even on windows 7. I've been playing it since may days. Awsome game with realistic graphics. I feel it is same as battle field. if you are playing in a laptop, try to connect it to monitor, it runs very good.
READ MORE

An old enough game but worth playing

Well, I got interested about playing this game after playing COD MW 3. That sounds strange......but actually I got curious about the characters in the game and I decided to play this one the first installment of the series. But well, an excellent game as far as the story line goes. But well graphics wise it is average when compared to its second and third installments but when compared to its contemporaries.........it is brilliant.
Flipkart's delivery and packing was once again worth commenda...
READ MORE

AWESOME GAME........worth money. i bought this game recently from the market.this game has photo realistic graphics.winning more 40 E3 awards four years earlier the game is still topping the list and becomes the first of its kind.I recommend this game.
READ MORE

Its an incredible game.It has a deep storylinw which is quite fun to play.....weapons nd action is beautiful...d graphics r quite gud nd dnt require a high end pc to play on.Multiplayer is great too wid different types of gameplay.Loved it!
READ MORE

The Best amongst all FPS Games

I have played many FPS games, latest and the old ones. I would say that this is the best FPS game for starters. It can play with great Graphics on your laptop with basic configurations. Totally loved the Game.
READ MORE

Featuring an intense and cinematic action experience, this shooter game can be played on single-player and multi-player modes.

As a U.S Marine or a British S.A.S soldier, take on terrorists in the most dangerous parts of the world. With a storyline full of twists and turns, players use lethal weapons and superior firepower on the battlefield. The game arms the players with modern arsenal, including powerful missiles, fighter planes and tanks.

The game-of-the-year edition of Call of Duty 4: Modern Warfare is a great choice for COD fans and FPS enthusiasts and is playable on PC. This game can be played on a system with NVIDIA Geforce 6600 and above or with ATI Radeon® 9800Pro and above.

The game has an M for Mature rating by ESRB due to all the war simulations it depicts.