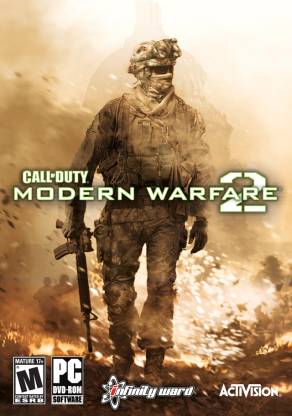 Modern Warfare 2, the sequel to the Multiplayer Game of the Year winner Call Of Duty 4: Modern Warfare, continues the gripping and heart-racing saga with an unprecedented level of action as players face off against a new threat dedicated to bringing the world to the brink of collapse.

Call of Warfare:Stunning cinematic action, including new underwater missions, new gadgets such as the motion detector and new vehicles including snowmobiles and more.

Rough guide:Massive globe-spanning adventure sees you travelling to the deserts of Afghanistan, the slums of Rio de Janerio and the wilderness of Russia.

Bigger world:New larger levels allow you to tackle missions however you want: will you try a frontal assault or a more stealthy approach from another angle

Be the best:Competitive multiplayer is even bigger and better than before, with all-new rewards for everyone from raw recruits to the most experienced players.

Product FeaturesEpic single-player campaign picks up immediately following the thrilling events from Call of Duty 4: Modern WarfareThe definitive multiplayer experience returns, with a host of new perks and enhancementsNew cooperative SpecOps mode, the perfect combination of Modern Warfare's single player intensity and the addictive replayability of its multiplayerSpecial Ops Mode allows two players, either alone or with a friend, to engage in unique mission play and features split-screen functionalityModern Warfare 2 contains new and updated weapons, new weapons attachments, and a variant of the multiplayer weapons customisation system from Call of Duty 4, now available in the single player campaign

Awesome and Awesome !! Add me on Steam id : nightfox65

Hi, guys everybody was saying this game sucks etc but for me it rocks multiplayer is so awesome than any other game love this game but ya make sure you have good net speed because this is for steam it download some data from DVD and then updates total 11.5gb aprox from STEAM. love it just go for it though graphics are less compared to bfbc2
but this has all real feeling,Just go for it :) and ya Flipkart service nothing to ay you all know got within 3 days :P cheers to flip and mw2
READ MORE

Its a pretty decent game but not better than battlefield 3
And for those who want to download it from the disk and not internet you should see support section in steam. Its given there how to install from disk instead of steam. This applies to all steam games
READ MORE

A very complicated installation procedure, but in the end you feel it's totally worth it! Add me on steam : rithwik2

First thing, kudos to flipkart! They shipped my order in less than 3 hrs and I received it the next day. Now talking about the installation procedures, hell yeah it's complicated, but surfing through the net somehow helped me get through it though it took time. And, finally about the game : Awesome, Superb , Fantastic, Amazing! The single player is short but very intense and you totally get into the story. The graphics are awesome and it is even optimised for the budget graphic cards. The Mul...
READ MORE

One of the Best Game for Fps lovers
SinglePlayer Story line in Mordern Warfare Series is one of the BEST.
Multiplayer is good but in india u won't get decent Fps for playing online and also there are only around 1200 players online on daily basis(source Steamcharts).
Go for it if u love SP but don't expect much from MP.
Still of the BEST SP story line Hand's down to that.
READ MORE

One of the best games in COD franchise. Though lot more single person shooter have now arrived in the market COD still remains one of the most loved games. From story telling to action packed thrill there is nothing you won't love in COD game.
READ MORE

Flipkarts delivery was great as always
And cod mw2 campaign is very action packed and has some memorable moments.
The multiplayer is the most fun cod multiplayer ever this game is totally worth buying.
READ MORE

really good gameplay works on 2.3ghz and 2gb ram intel hd graphics work fine on these specs .Really good changes from the first part good climax ,story,gamelay bt have to download 11gb first from steam and also the multiplayer is not good no servers and u have to wait a lot to play oit
READ MORE

Lot of Tangos to go for everyone to kill

The thing that impressed me most was how the effects had improved drastically over the first Modern Warfare.
Now that I'm done with MW2, I can move on to MW3.
Thanks to Flipk for fast delivery and slashing the price just when I was about to buy it.
READ MORE

Ahhh. THe cod has always delivered the best shooting and war stimulating experince it can, but this game takes the whole level to an extreme high. The sudden apperence of Cpt.Price makes the game fantastic. The scenes in the Russian castle are terrific. Worth buying this game. Guys its worth every penny of it.
READ MORE

As soon as i got my game i tried to install it. The games was installed by Steam.And after i installed game the Steam started to update the game and update size was 11 GB.It is better to get it via torrant.
READ MORE

1
0
Permalink
Report Abuse
+
All 26 reviews
Questions and Answers
Q:can it work with 2gb ram and windows 7
A:YES It can work in 2 gb ram and windows 7 but you have require good internet connection for download this Game from our website [ code in the box means you receive only code ]
TRIANGLE5
Flipkart Seller
0
1
Report Abuse
Didn't get the right answer you were looking for
Safe and Secure Payments.Easy returns.100% Authentic products.
You might be interested in
Movies
Min 30% Off
Shop Now
Controllers
Min 50% Off
Shop Now
PS2 Physical Games
Min 25% Off
Shop Now
PC Physical Games
Min 50% Off
Shop Now
Back to top
;