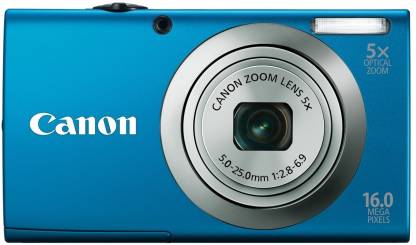 From Canon’s highly successful range of PowerShot A-series digital cameras, comes the A2300 point and shoot camera. This highly capable mid-level digital camera with an array of significant features and functions makes an ideal pick for hobbyists and beginners looking to explore the basic techniques in digital photography.

This A-series PowerShot camera from Canon features a 28 mm wide angle lens and a focal length of 5 mm to 25 mm or a 35 mm equivalent of 28 mm to 140 mm. This wide angle lens has a 5x optical zoom with the availability of 4x digital zoom, which combine to give the camera a whooping 20x of zooming ability. The CCD sensor on this Canon PowerShot allows the user to capture images at an incredibly high 16 megapixel resolution.

The PowerShot A2300 features a body design that weighs in at a very modest 125 g which includes the battery and memory card. The compact size, strong build and light weight components provide the A2300 with increased durability and portability.

The back panel of the A2300 houses a 2.7 inch wide angle TFT colour display with 5 levels of brightness adjustment levels for increased customization. This LCD screen has a display resolution of 230,000 dots with an aspect ratio of 4:3. The 16 megapixel camera when combined with Canon’s highly advanced Digic 4 processor makes it possible for the PowerShot A2300 to record HD video at a resolution of 1280 x 720 at 25 frames per second.

The advent of an NB-11L rechargeable lithium-ion battery powers the Canon A2300 for up to 210 shots on full charge. All the recorded video and captured images are stored in the camera’s recording media which is in the form of an SD, SDHC or SDXC memory card. These saved files on the memory card can easily be transferred to a PC or a laptop via the camera’s high-speed USB 2.0 port, which is compatible with latest versions of Windows and Mac operating systems.

This Canon PowerShot camera features monaural audio output and an analog video output function that is capable of transmitting both PAL and NTSC signals.

The A2300 from Canon has a circular aperture control that helps the user to control the amount of light passing through the camera’s lens. The aperture range on this camera ranges from f/2.8 to f/7.9 (Wide) and from f/6.9 to f/20 (Tele), giving you high quality images even under poor or insufficient lighting. The TTL or through the lens autofocus system on this PowerShot camera sports a range that starts from 3 cm (Wide) and 1.2 m (Tele) to infinity in the normal mode. It also has a macro focusing range of 3 cm to 60 cm.

The light sensitivity of this camera ranges from ISO 100 to 1600 giving you clear images irrespective of the available lighting conditions. The A2300 also features a wide range of adjustable shutter speeds from a maximum 1/2000 sec to a minimum of 15 sec. A built-in flash with auto and manual adjustment modes lets you control the intensity of the flash, within the available flash range of 50 cm to 3.0 m (Wide) and 1.0 to 2.0 m (Tele).

The Canon A2300 comes with an assortment of white balancing and shooting modes with Red Eye Reduction and Face Detection technology, which together help in achieving the best result in very specific situations or conditions. The camera also uses a digital image stabilizer to makes sure that the captured images and videos are sharp and shake free. The PowerShot camera further comes enabled with PictBridge technology that allows you to connect the camera directly to a printer without a PC, enabling easy direct photo printing.

The Canon A2300’s self-timer function works on a 2 or 10 sec delay, giving the photographer enough time to be part of the image. The continuous mode is an advanced feature that allows the A2300 to take a series of shots in quick succession. In the Program mode, this Canon camera is capable of 0.8 shots per second and when on the low light mode, can take up to 2.8 shots per second, making the camera perfectly suited for all possible scenarios.

I dint buy it from flipkart, as i had an urgent requirement. moreover the price is still at par with the shop where from i bought it. About the cam, i feel its a very good camera in this range. it gives original color, which lacks in the similar budget Nikon(yellowish) or Sony(redish) models. Macro is very very good comparing to other cam in this range. If you have passion in photography, you can start experimenting with "depth of field" with the macro option. here are some pros & cons:

no Sony, no Nikon, only CANON

The best Point & Shoot Camera at this price

I was willing to have any impressive and ton of featured solid camera under 7k.
I reviewed and visit sony ,samsung,Nikon and canon's site & showroom. I also visits youtube for video quality and found Canon as a winner!
I'm Using it since December 12 & totally satisfied with this camera and it's awesome features . However this is my very first Camera but it's totally friendly, it's preset settings are very helpful i never needed any manual corrections .

It is the best model in Canon-Powershot series. It does have the said pro's and the said con's as well. I too experienced it immediately after buying this from a retail store. Initially,I was looking forward to buy Canon A2400 IS which has got the built in image stability which can convert a moving image to a still image. I went to buy this model with the notion of built IS feature. Before going ahead, I went through the bad reviews. Even after I went further to buy it with risk. But my decis...
READ MORE

This is one heck of a camera

I recently purchased this and this is one heck of a camera. This is the best u can get at this price range. Canon always beats Nikon. I would definitely recommend this camera.

Cons:
As of now didn't find anything add in this :)
READ MORE

It's one of the very good product from canon and working as expected. As I'm already using canon ixus, but I'm very impressed with PowerShoot A2300. HD video recording is very nice and it provides rich clarity. As everyone knows and experienced, Flipkart is amazing in all ways to deliver the goods. Thanks FlipKart.
READ MORE

a good product of canon....it is very slim..
good buy for this amount....but if u wanna buy better then this then go for the cam above 10k.
it has good flash light.
delivery from flipkart is awesome......go for it...
READ MORE

BEST PICK IN THIS RANGE

got my powershot camera today only...

well some minor negative points r also there... lacking of panorama mode.... and no pause provision in video mode...

but overall its a good camera in dis range :)
READ MORE

The Canon PowerShot 2300 Point & Shoot is superb, outstanding and awesome.
Excellent pics indoors as well as outdoors with 5X digital zoom and also the canon software is amazing.
With the 16.0 megapixel the resolution is excellent.
Very light in weight and small in size so very easy to handle.
And very satisfied with the free extra accessories which includes 4 GB memory card and pouch which can save and additional cost of Rs. 500-700.
Digital Camera for Rs.6300 is actually a paisa vassol.
I s...
READ MORE

GREAT and BEST Camera by Canon

I have this in blue color which looks very cool,this is the best camera by Canon because of incredible features.Canon A2300 which give 16 M.P, 5 x zoom, easy to use, the picture Quality is so Sharp and Clear.U can shoot Video in H.D.The battery back up is also very good. The price of this product not much high considering the it's features.I am fully Satisfied with Canon A2300. Therefore the Canon is No.1 in Brand list.But Why? U should think about it friends!! B'coz Its awesome and great cam...
READ MORE