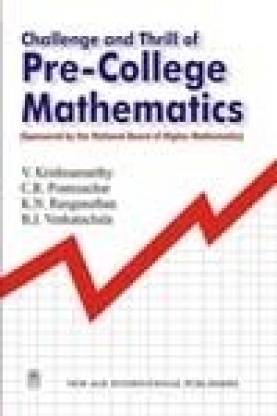 In Challenge And Thrill Of Pre-College Mathematics, the authors have attempted to enrich the mathematical knowledge of the students in interesting ways, without making the subject boring and cumbersome.

Challenge And Thrill Of Pre-College Mathematics has been written for students studying in classes 9 to 12. The book attempts to entice them into enjoying mathematics and solving mathematical problems. The authors have attempted to make the book and the subject, interesting, so as to motivate the students who dislike the subject, into enjoying it. For those students who already like mathematics, the book provides an interesting and innovative treatment of the topics covered.

Challenge And Thrill Of Pre-College Mathematics has been written in a comprehensive manner. This book will help children develop a sound mathematical way of thinking.

The first chapter of the book is titled Number Systems. This chapter introduces students to the various classes of numbers. The second chapter, Arithmetic of Integers, throws light on divisibility and the principle of induction. The next chapter, Geometry: Straight Lines and Triangles, and the fourth chapter, Geometry: Circles, covers tangents, constructions, and cyclic quadrilaterals. This is followed by a chapter on Quadratic Equations and Expressions.

These are followed by chapters on Trigonometry, Coordinate Geometry of Circles and Straight Lines, Linear Equations, Permutations and Combinations, Polynomials, Elementary Combinatorics, Inequalities, Beginnings of Number Theory and the Probability Theory, Finite Series, and De Moivre’s Theorem and the Applications of the Theorem.

These chapters are followed by a chapter titled Miscellaneous Problems. The authors have provided more than 300 hundred worked out problems, many of which have been taken from national and international Olympiad papers.

V. Krishnamurthy was the Professor of Mathematics and also the Deputy Director of BITS Pilani. He is the Director of K. K. Birla Academy.

Combinatorics: Theory and Applications, Introduction to Linear Algebra, and Culture, Excitement and Relevance Of Mathematics are some of the books he has written.

Another book by him is Mathematical Challenges From The Olympiads.

He is a Scientific Officer of the Mathematical Olympiad Cell, National Board of Mathematics.

B. J. Venkatachala previously taught at Kuvempu University in Karnataka. Like Pranesachar, he is also a Scientific Officer of the Mathematical Olympiad Cell.

He has also written the book titled Problem Primer For The Olympiad.

K. N. Ranganathan is a Professor of Mathematics at Chennai’s Rama Krishna Mission Vivekananda College.
All four authors have been involved in training the national Olympiad team since 1988.

Brilliant book for all Olympiads and Entrance Exams

The book has a lot of great questions and various theorems to solve all kinds of problems. A must have for those aspiring to become excellent at Math! Useful for Olympiads and Entrance Exams. The book is easy to understand and explanation is also thorough.
READ MORE

This book is well written and is a very good book for learning the basics as well as advanced mathematics. It is especially good for geometry. The problems are also very good and interesting. Perfect for those who want to crack maths olympiad. I had bought this book for learning geometry basics, as I was not good at it, and it is helping me very much.
READ MORE

It is a very good books for aspirants for various mathematical competitions including RMO, INMO etc. This contains all the basic tools of advanced school level mathematics. It is an ideal book for any 8th or 9th class student. It covers topics like number theory, trigonometry, geometry of straight lines and circles coordinate geometry of straight lines and circles, probability theory, quadratic equations and expressions, combinatorics, permutations and combinations inequalities, factorisatio...
READ MORE

Incredible book. Fast delivery. I just got the time to skim through it before RMO and it worked wonders
READ MORE

A must have book to bring thinking level a step one.

A book which explain every thing from the basic.Remove each and every doubts. language is easy and written in lucid manner. i am happy with it and i would recommend it to all my students preparing for NTSE, Olympiad, RMO etc.
READ MORE

this is useful book and a interesting book

this is useful book and a interesting book.it has easy problems of additions and subtractions which are quite simple to understand. i love division problems of this book. over all this is a worthy book.
READ MORE

Great book for geometry and one of the best book for RMO type exams........ And what to say about flipkart...... They just rock!!!!!!They provided great shopping experience...
READ MORE

in short bang for the buck
READ MORE

This is a really nice book for students, from Class 9 onwards, and for students keen on doing well in Competitive exams like Olympiads etc. Although it does not cover a major chunk of the + 2 syllabus, it has a good lot of problems and nice ones too. Not many books explain Number Theory the way this book as. It is a must buy for all students from Class 9 to Class 11.

Finally I edit my review.Its a real blinder.Very good book for Olympiads.The book has covered the most topics of any maths Olympiad book. Last time I told that one more book A Perfect Resource Book for Indian National Mathematics Olympiad is better. I have almost used both books. The Arihant book lacks Trigonometry which should have been included. I will advice every Rmo aspirant to buy both the books-This and the arihant one. Comparing both-Challenges and thrills emerges as the winner,
READ MORE