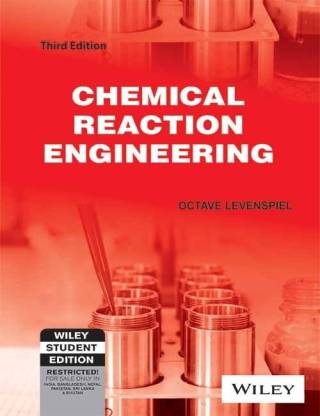 Chemical Reaction Engineering is a complete book on how to answer reactor design questions reliably and effectively.

Chemical Reaction Engineering emphasises on the qualitative arguments, simple design methods, graphical procedures, and frequent comparison of capabilities of major reactor types. This book pertains to the development of chemical reactions on a commercial scale. With an elementary description on the related topics, this book also covers an extended, elaborate, and complex idea of the subject. This helps students get an idea of the respective topics before moving on to the complex ones.

Chemical Reaction Engineering is divided into three parts. The first part of this book deals with Homogeneous Reactions in Ideal Reactors. In this part, the book elaborates the ideas of Reactor Design with a complete introduction to it. This part of the book also covers many other areas, like Design for Single Reactions, Design for Parallel Reactions, and Potpourri of Multiple Reactions. The second part of the book comprises an analysis on Non Ideal Flow in reactors. This part is further split into topics like Compartment Models, The Dispersion Model, and The Tank-in-Series Model in reactors. The third part of the book deals with Reactions Catalyzed by Solids in reactors.

Professor Levenspiel has authored many other books like The Chemical Reactor Omnibook, Engineering Flow and Heat Exchange, Understanding Engineering Thermo, and Rambling through Science and Technology. He has also co-authored a book called Fluidization Engineering, which was published in October 1991.

Born in Shanghai, China, in 1926, Professor Levenspiel attended a German grade school and English high school, and later obtained a degree from a French university. He also studied at UC Berkeley and at Oregon State University, from where he acquired his PhD in 1952.

Professor Octave Levenspiel is well-known among the scholars for his ability to do quick back-of-the-envelope calculations. GNU Octave, a high level programming language developed by one of his former students John W. Eaton, was named after him.

This is really nice book, just buy it blindly!!!!

If you are studying this subject, then you must buy it. It not only clears the basic concepts but also takes us to the depth of the subject quite interestingly. It has really helped me to gain confidence for this subject.
READ MORE

Extremely helpful for chemical engg students, especially for those preparing to sit for GATE examination. All the chapters are straight to the topic and the chapter ending exercises are extremely helpful.
READ MORE

one of the best book for chemical reaction engineering course.Every chemical engineer student must study from that book.
READ MORE

I got old book.
READ MORE