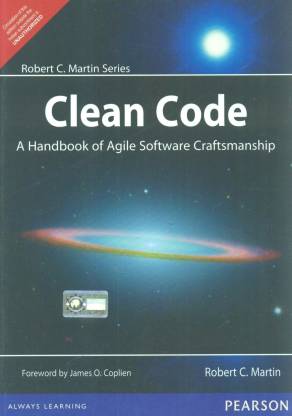 In Clean Code: A Handbook Of Agile Software Craftsman, the authors stress the fact that a bad code may have some chances at working. However, a code that is not clean does not work and can contribute hugely to the failure of an organization. The authors go further to say that the book can make one a good programmer but at the same time caution, that it is possible only if the user works on it.

It is laced with case studies and every case study serves as an effective example for code cleaning, depicting how a wrong, inefficient code can be turned into a clean and sound one. The book is divided into three sections. The first describes the basics on code cleaning, its principles and practices. The second contains well-illustrated case studies related to code cleaning, while the third contains properly formed conclusions and deductions based on these conclusions.

Clean Code: A Handbook Of Agile Software Craftsman therefore, creates a knowledge base that determines the way its readers read or think on a code. It was published in 2011 by Pearson Education.

Also known as ‘Uncle Bob’, Robert Cecil Martin is an American author and software consultant. He has spent several decades in the field of software engineering and consultancy.

Other books by the author include Agile Software Development: Principles, Patterns And Practices, Designing Object-Oriented C++ Applications Using The Booch Method, and The Clean Coder: A Code Of Conduct For Professional Programmers.

An active member of the software craftsmanship movement, he founded a group for agile software development in 2001. He is also the founder of a software consulting firm called Object Mentor Inc. that trains its clients in the use of Java, C++, UML, Patterns and OOP, extreme programming and agile methodologies. He has been the editor in chief of C++ Report. He also developed a video on clean coding.

James O Coplien is a Denmark based lecturer and author who has written several books on software designing, programming and Agile Organization structures.

Other books by the author are Advanced C++ Programming Styles And Idioms, Pattern Languages Of Program Design, Software Patterns and Organizational Patterns Of Agile Software Development.

He is one of the earliest authors on Agile discipline. A visiting professor in the University Of Manchester, he has held several conferences on the Pattern Languages Of Programs. He has been the Program Chair Of Object Oriented Programming, Systems, Languages & Applications Conference. 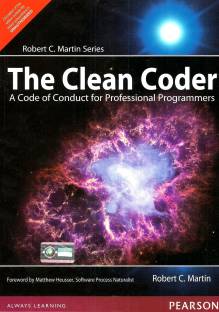 If you want to write good code, then you ought to read this

Clean Code is all about the code already written, about the code you write and about the code to be written.
What this book is about?
- Principles to guide you to write code that not only works, but is pleasant to read, easier to maintain and enhance.
- Help a developer to start transition towards being craftsman in other words start their journey to be craftsmen.

Salient feature of the book:
- The book is about code and hence you see lot of code examples for each principle described.
- The ...
READ MORE

Must have book for a software professional

Must have book for a software professional. Does not matter if you are starting a career in software development, 3 years experienced or 10 years. This book is gonna improve your coding style, making your code more readable and maintainable.

Better to get it at the start of career so that you could start writing good code from very early stage.
READ MORE

A must read book for a programmer

The book encapsulates proven best practices and insights of highly experienced and thoughtful programmers, known for their pragmatism through out the world.

No course or textbook can teach you what experience could. And that's what this book delivers.

I recommend this book to anyone who is serious (or crazy) about programming as an interest or as a career. A must read and must own
READ MORE

Best deal with good service from Flipkart team!
Good book for any developer who is willing to write a clean &a quality code!
It has good examples and explanation as to why write a clean code.
I found this book really useful!
READ MORE

Clean code teaches very good practices of writing code. Its also helpful if you want to refactor code. Even though it is best suited for an experienced programmer, but its beneficial for everyone who writes code.
READ MORE

Every one should have it. Nice stuff
READ MORE

Very good book, but the quality of print and paper leave much to desire. Cheap print quality can only be neglected due to the good content in it. Since the price is WAY less than the imported one, I guess we are not left with a choice.
READ MORE

Best product for Every programmers....If you are a beginner, this is like tressure for you....
READ MORE