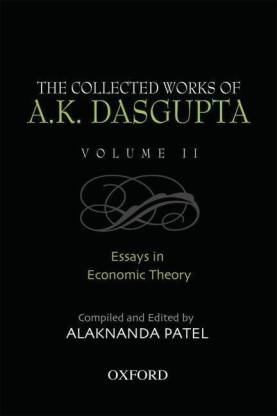 The second of the three volumes, this collection of fifty-five essays divided into seven distinct segments, contains the writings of Amiya Dasgupta on economic theory. The collection contains his pioneering work on wages and employment in economies with an unlimited supply of unskilled labour. Dasgupta's motivation came from his observations of the world around him; in particular, events unfolding in the Indian economy in the post-independence era. Readers will have a deeper understanding of the underlying structure of the Indian economy during the post-War years, and the history of development of political economy.

The essays are a luminous display of the interaction between economic theory and the empirical sources, and the immediate applicability of that theory. Above all, they are the definitive intellectual testimony of one of India's greatest social thinkers and the founder of modern economics in India.

The volume improves the understanding of the working of less developed economies. It deliberates on the applicability of economic theory as developed in the West, to problems of the less developed ones. The volume has been introduced comprehensively by Partha Dasgupta, the author's son, himself an eminent economist and Frank Ramsey Professor of Economics, University of Cambridge.

The biographical sketch, written by the author's daughter and the volume editor, Alaknanda Patel dwells on the rare combination of tradition and reason of a man who questioned and looked for answers on every issue, a unique blend of scholarship and acute practical observation.

Volume I contains two of the author's most important treatises: The Conception of Surplus in Theoretical Economics which is an important determinant of the course of economic forces; and Epochs of Economic Theory which traces the historical development of economic theory and offers several original perspectives on classical political economy.

The volume has been introduced by Dilip M. Nachane who provides an overview of economic thought in India in the early twentieth century that was influenced by: a) the nationalist strand; b) the colonial regime; and c) the Gandhian ideal of Swadeshi, village self-sufficiency, and trusteeship.

Volume III brings a collection of essays, articles, reviews, and reminiscences written over a span of more than six decades. It bears the stamp of the author's unique views on the development of economic theory and its relevance to economic policy, war and post-war inflation, and international economic relations. It brings out broadly the author's approach to economic policy and planning, general concern for human well-being, and the state of the society.

This volume has been introduced by I.G. Patel, eminent economist and former Governor, Reserve Bank of India. He held the post of Director, London School of Economics and Political Science.