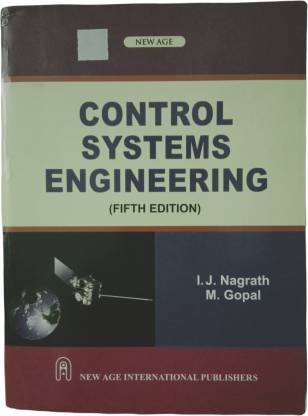 Sold Out
This item is currently out of stock
Author
Nagrath I. J.
Read More
Highlights

The book is a comprehensive textbook on control systems engineering.

The book provides comprehensive coverage of various issues under control systems engineering. The book is suitable for courses at both the undergraduate and postgraduate level of engineering. Since the subject matter is inter-disciplinary, examples in the book are based on different branches of engineering.

In this revised edition, the book includes a host of new topics such as Neural Network Control, Nonlinear Systems, and Robotics Modeling and Control. In depth coverage has been given to classical and modern approaches on Digital Control. Explanations on PID tuning procedure and Robust Control have been improved and are accompanied by illustrations where necessary. Care has been taken to remove examples based on outdated technologies and to update the same with more relevant cases.

I. J. Nagrath is the Adjunct Professor and former Deputy Director, BITS, Pilani.

He has authored several leading books on engineering such as Modern Power System Analysis, Robotics and Control, Analog Computation and Simulation, and Basic Electrical Engineering. His research papers have been published in prominent technical journals.

Prof. Nagrath received his M.S. from Wisconsin University, USA. He has also worked widely in the fields of robotics, signals and systems, and power.

M. Gopal is Professor of Electrical Engineering at the Indian Institute of Technology (IIT), New Delhi.

He has previously taught at IIT, Bombay, BITS, Pilani, and REC, Jaipur. He has also worked as an Honorary Visiting Professor in the Control Engineering Center at City University.

not a gud book for this technical subject.

i dnt agree with other reviewers. in this book the most difficult topics like nyquist criteria, root locii etc. are not explained clearly. moreover an intelligent student can't understand there topics from this book clearly. best book for clear understanding is control system by ramesh babu. just study from that book and u can teach ur teachers.
it is my personal experience that teachers dnt tell right books to students becoz they dnt wanna make u independent.
READ MORE

Control Systems Engineering 8122420087
by I J Nagrath M Gopal
This book is better than any other book available in control systems.This is good for theory not much for problems.
This is what i felt about this book.
READ MORE

A Comprehensive Book on Sontrol Systems

Self contained and Comprehensive Book.
The book provides an intuitive feel for the subject.
However inorder to get the feel one has to go over the definition of the concept, its background, relevant figures, worked examples and applications.
It takes some time because of the rigour of the book.
READ MORE

This book lacks examples after each topic. A book is good if things are clear once studied. But i feel only few concept are clear and most of the topics are made unnecessary tough. only two problems from bode plot does not clear bode plot. this book looks good from going through the topics ideally, because properly colored. but this is not a good book for preparation like GATE/PSU/ESE. Don't know why this book was written in an effortless manner.
READ MORE

this is best book for control system from competetion point of view as well as for college.
concepts are given in proper way as well as questions are good.
five star for book as well as flipkart service
READ MORE

Standard reference book followed in all Engg. Colleges in India. Overall it is much better than BS manke(which other wise is famous for only block diagrams ques) Learn & study and sail your way thru all the exams. excellent for developing concepts and apt examples are also given. however if you are a geek and into research then go for BC Kuo.
READ MORE

I am very much impressed by the service. I got the book in less than 24 hrs.
Good work please keep up good the service.

Well the book is also nice. the topics are covered in a structured manner. very nice collection of examples and problem.

It's worth it guys..
READ MORE

Con: It make the beginner to afraid by introducing things abruptly.

If you are a beginner, i suggest Control System by BS Manke
READ MORE

Very bad book! Urge Teachers to give bad feedback in the publisher website.

It doesnt give the basic definitions of any topic. In the first chapter itself, it didnt define what exactly is servomechanism etc. The whole text/theory of the book is examples and examples. The author fails to link how the example is linked to the topic.

for example, same example text is given for closed loop system and servomechanism using a missile working mechanism directly. But what is closedloop and servomechanism,i had to look up on the internet to get the meaning and proper definiti...
READ MORE

This is the worst book I have ever seen on the subject Control Systems which is very important course in engineering.

There is no flow of the subject matter, definitions are not given properly, new concepts are used out of blue, new notations and variables are used abruptly in the mathematical analysis and no clue given to the reader where it has come from.

Not suggested for any kind of student group either beginner or advanced.
No explanation only examples.