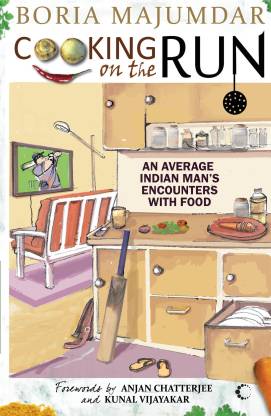 Get notified when this item comes back in stock.
Home
Books
Lifestyle, Hobby and Sport Books
Cookery Books

Cooking On The Run is a cookbook tailored specifically for men, with easy to cook recipes for delicious and nutritious meals.

Boria Majumdar is a familiar name to anyone who follows Indian sports. He is a sports journalist, and a cricket writer. Cooking On The Run reveals another facet of his personality, that of an enthusiastic cook. Despite this, he says that this book is not a demonstration of his culinary expertise. Rather, it is just the average Indian man’s encounters with food.

He always enjoyed his food, but not until he was studying at Oxford did he ever set foot into a kitchen in order to cook. He then began to try his hand at cooking various dishes for his friends. He is Bengali, and so most of the recipes have a distinctive Bengali flavor, even though the recipes are varied. It contains a mix of recipes from many different kinds of cuisines. The ingredients used are simple, and not very exotic. Even if not available in the kitchen, they can be bought at the local grocery store.This makes it convenient for the inexperienced cook who would definitely not have a full stock of all necessary ingredients.

The author has traveled throughout the world, and so, he has also included many of his culinary experiences in various parts of the world, including his own beloved Kolkata. He describes Kolkata’s own China town, Tangra, and the food he has tasted in its Chinese restaurants. He also shares his experience of tasting Samosas in Melbourne, and Udupi Palace Dosas in Chicago. These anecdotes are an extra bonus in this interesting cookbook.

The author says he finds cooking not just a useful skill, but a therapeutic experience. He explains why everyone needs to develop their culinary skills, and why it is essential for survival. Cooking On The Run has many metaphors related to cricket present. Even chapter names have cricket associations such as Power Play and Slog Overs. This and his interesting experiences in many different parts of the world add a lot of spice to this unusual cookbook.

Boria Majumdar is a sports writer and commentator.

Other books by this author include Sport in South Asian Society: Past and Present, Olympics: The India Story, Sellotape Legacy: Delhi & the Commonwealth Games, and The Illustrated History of Indian Cricket.

Boria Majumdar is a Rhodes Scholar. He earned his doctorate from St. Johns College, Oxford, with a thesis on The Social History Of Indian Cricket. He appears regularly on many sports shows on television and has regular columns on many print publications. He is also an adjunct professor at Monash University.

I have a habit of purchasing cookbooks mainly for the enjoyment of reading them.. form the first ever Bengali cookbook Pak-Pranali (which surprisingly lists Paneer Ghebar as a recipe), Pragya Sundari Devi's book to the ultra-modern 10 minutes Microwave cookings including Shatarupa, Sadhana Mukherjee, Supriya Devi, Marsha Mehran..name them and chance it that I own it as well as frequenting blogs. All of them are sheer delight to read however none helped me to get over my "unpredictable cook" s...
READ MORE

So being a working professional, you miss eating food at home, miss the warmth of that kitchen. And most of all, you want to be able to make good food for yourself, and for others around you. Right?

Boria Majumdar's recipes as you read, are flawless, simply easy to cook. You'll be surprised at how much fun it actually is. Also reading through his experiences with cricket, food, life are so heart warming. He writes with such passion about his experiences, his food, you simply can't not try ou...
READ MORE

Such good fun to follow the journey from his tentative student efforts to confident adult cook! Mr. Majumdar's dealings with restaurant owners, shop keepers, fish vendors, friends, all attest to his warm humor as he seeks the tastes, then the ingredients, then the competence to prepare (quickly) meals that are truly a pleasant surprise.
I have tried the curried cauliflower and the chicken biryani...both easy and delicious.
( I needed help to convert the grams to ounces...a minor obstacle)
READ MORE

Cooking on the Run breaks the norm of a usual cook book that we all have read so far. Its unique in its own way. It's a book for you, me and many others who struggle to cook even a basic breakfast leave aside a meal. The recipes mentioned in the book are simple, something that we all can attempt to cook & trust me you will not go wrong. Being a vegetarian I did try a couple of them and it is just as simple in the kitchen as it has been mentioned in the book. Most of the recipes are stuff that...
READ MORE

If you are a die-hard Sachin fan, craving to know every detail about him,
You would also love to know the favorite dish of Sachin Tendulkar and the recipe for it!!

Grab your copy copy of ‘Cooking on the Run’, by Boria Majumdar,

The book, like a perfect meal, is a compilation of all the tastes one would ideally encounter in a balanced diet and the best part it has all the crucial cooking tips you need to survive in minimal time.
READ MORE

the other side of the sports historian

We have seen Boria Majumdar a seasoned sports historian speak and write passionately about sports and earning kudos with his no-holds barred comments. With Cooking on the Run, Boria delves into his other passion that he has developed while travelling across the globe – Cooking. Being a Bengali and a foodie it was only but natural that many of the mouth-watering Bengali dishes along with the ways to cook them find their way in this book. A must and engrossing read for men who travel around the...
READ MORE

I am a 'cook fast' and 'eat faster' kind of mom! Working mothers should thank Boria for thinking of writing a book such as this. The books, besides living up to it's name, also is a kitchen standby for busy cooks - both men and women. Thus it effortlessly diminishes the boundaries between sexes and allows us to feel one in the kitchen.

The recipes are workable, speedy and let you choose and create a complete dinner menu if you'd want. So, they are as good to entertain friends while sipping...
READ MORE

From Cricket Expert to Cooking Expert...

From keeping an eye on cover drives and bouncers to cooking, its really interesting. I have covered many tours with the writer and i know that how hard working he is, still getting time for cooking shows his interest in kitchen :-) You can see Mr. Boria Majumdar taking hard lines against the players on TIMES NOW- but i have seen him asking What do you want to eat- i will cook for you. I congratulate him for coming out from his fortay and writing such an interesting book. I was there for the b...
READ MORE

can men write good cookbooks! You bet they can....

I must confess that when I opened the book, I wasn't convinced it would have something interesting to hold my attention. After all, women are the epitomes of cooking brilliance. And here was this man, claiming to teach cooking on the run....

Well, not only was I surprised, I also was sheepishly glad that the author could offer recipes which are really 'recipes on the go!' If you love to cook but donot have time for it, do read this book. It's interesting, something that you can refer to when...
READ MORE

An engaging passion for food

This is more than a cook book - like all the best ones it's also a memoir and perceptive whistlestop tour of the author's encounters with food and cooks on his many travels. In his typically ebullient and engaging style Boria describes his passion for food without sparing us the hilarious details of his early disasters in the kitchen - like his attempt to cook an omelette in an unheated pan. The beauty of the recipes (and there are many) is their simplicity. They are not haute cuisine but de...
READ MORE