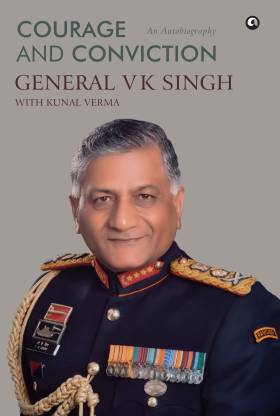 Courage and Conviction is a tell-all autobiography of General V. K. Singh, who served in the Indian Army for forty-two long years and retired as the Chief of Army Staff on 31st May, 2012.

The book is his about his journey in the Indian Army and his distinguished career, which saw him on the front lines of combat in the Indo-Pak War of 1971. The readers get a good insight and some untold stories of his experiences in the war. He was also a part of the Peace Keeping Force sent to Sri Lanka. General V. K. Singh has always been blatantly honest about his views and in the book he writes about instances when he had to take a firm stand on many issues, from deployment of the army against the Maoists to procurement of arms.

V. K. Singh was trained at the National Defence Academy and the Indian Military Academy. He has served in some of the most crucial and important regions of the country. He recalls his early days in the Army when he was appointed as the company commander on the LOC in Poonch, to his later of days when he was commanding and leading the most elite regiments in Jammu and Kashmir and the vast eastern Command. He also writes about his experiences in military operations like the Blue Star movement and Brasstacks and Trident. His life story is truly inspirational and makes an amazing read. He has been very direct, compelling and sometimes a little controversial in this book and has never been afraid to stand by his convictions.

General Vijay Kumar Singh is a retired general of the Indian Army, who served as the 26th Chief of Army Staff. He was the first commando to be promoted general. He was also the first serving Indian military chief to take the Government to court. He is the first Indian armed forces officer to be inducted into the United States Army War College. He has been been honored with numerous Medals, from the Param Vishisht Seva Medal to the Yudh Seva Medal for his distinguished service during Operation Pawan.

A SOLDIER'S STORY - ENGROSSING AND INSIGHTFUL

It is an interesting life story of a distinguished soldier narrated in simple down-to-earth style which makes the book easy to read and engrossing – yes, I found “Courage and Conviction” immensely readable and I would say that this book has seamless “Page Turning Quality (PTQ)”.
“Courage and Conviction” is certainly candid, but I did not find it controversial.
Even when discussing contentious issues the author does not go for the jugular but exercises restraint while describing various knotty...
READ MORE

excellent book by a person who actually has courage of conviction

a) Book is written in extremely simple language so that anyone can read and understand clearly, even without any military background.

b) It is evident from the book that General was Honest and Straightforward from his school days. He has carried these qualities all along and stood for it.

c) He has very clearly stated at every step, rank, appointment or situation he has shown both courage and conviction which probab...
READ MORE

This book by my ideal person Gen. V.K. SINGH (Retd.) is like a mirror of army and its working. how beaurocrats of our country keeping stronghold on politics and every system in governments. He always tried and tested some reforms during his tenureship and he explained it in this book. every youth, who wants to implement some changes in system and wants to creat a flawless image of india on international level, should read this. i had studied this book but want to study it again. please buy th...
READ MORE

perfect amalgum of history , bravery and valor of soldiers must recommend it to everyone who wants to know about working conditions of troops .
READ MORE

Having only read about the first hundred pages, I have learnt a very valuable lesson- Truth and honesty is the greatest source of courage and conviction. The unwavering will to true and upright leaves no room for doubt, anxiety, guilt and fear.
Written in simple straight forward language this book is an inspiration for our generation showing how courage to be true, even if it is opposed to your friends/colleagues serves the greater good. Highly recommended for Armed forces aspirants for...
READ MORE

One of the best books

Being interested in the lives of members of armed forces, I found this book to be very interesting and exciting. Gen. V K Singh being participated in the 1971 war that led to the liberation of Bangladesh and also the 1987 IPKF to Sri Lanka has narrated about his personal life and the lives, struggles, duties and responsibilities of the men in uniform in an excellent way. A must read if someone is even remotely interested about Indian Army.
READ MORE

Till now i have not finished reading.
But for the first 100 pages i went through, i found Mr VK Singh an honest and modest human being.Good autobiography by an inspirational man who stood up and fought for honour and dignity.
READ MORE

This is surely a griping read. the books throws light on solider's life and his journey in the most respectable institution. its also elucidate the way our army functions and articulates the manner in which the army operations functions.
it keeps you engage and while reading the book , I felt a imperceptible reverence and respect not only Gen Singh , but also to our brave soldiers who have laid down their life , and for those you are contentiously guarding our country in the most treacherou...
READ MORE

I am die hard fan of Gen. V. K. Singh. I had read many things about him on internet and had seen him speaking in various TV shows/news channels.
The book is nicely written. Not at single point reader gets bored. With every chapter one becomes more eager to know further.
It also tells many blunt truths about the life of Indian Armed Forces people.
It comments on Indian politics and red-tape-ism.
Not at single point reader finds self proclaimed stuff or self boasting.
The book is written by Ind...
READ MORE

Wonderful insight into the life of a soldier

It is indeed a very well written anecdote by Gen. V.K. Singh. In fact the account written by him about the last couple of years of his career highlight how the Government of the day and respected Govt. functionaries failed to behave in a responsible manner. In fact through this account I am able to join some loose ends spread around by the present government to malign the image of Gen. Singh. At the same time the book will prove to be quite useful for new recruits as Gen. Singh underlines the...
READ MORE