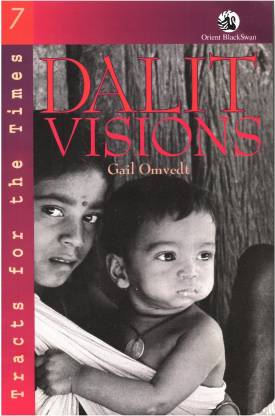 Dalit Visions, authored by Gail Omvedt, is a book that delves into the equations of the Indian tradition with Hinduism, and Hinduism with Brahmanism; and how Hinduism considers the Vedas as the initial texts of Indian tradition and culture.

Dalit Visions is based on thorough research made by the author about the paradigms of Hinduism. It includes discussions like: The Construction of Hinduism, Hinduism as Brahman Exploitation, Hinduism as Patriarchy, Hinduism as Aryan Conquest, Hinduism as Counter Revolution, Hinduism as Delhi Rule, Brahman Socialism and the Hindu Rate of Growth, Hinduism as Feudal Backwardness, and The Logic of Dalit Politics. The book offers deeper insights into the conditions of the Dalit throughout the history.

Gail Omvedt was born in America. She obtained her PhD in Sociology from the UC Berkeley. She is associated with the United Nations Development Programme through which she has been serving as a consulting sociologist on Rural Development, Environment and Gender. Gail has been a citizen of India since 1983 and has been an eminent Indian scholar, sociologist and human rights activist. She has been a part of Dalit and anti – caste movements herself and is striving for improvement of the downtrodden women, farmers and also the environment. Some of the other works penned by Gail are We Shall Smash This Prison: Indian Women in Struggle, Violence against Women: New Movements and New Theories in India, Reinventing Revolution: New Social Movements in India, Gender and Technology: Emerging Asian Visions, and Dalits and the Democratic Revolution: Dr. Ambedkar and Dalit Movement in Colonial India.

Read More
Specifications
Book Details
Dimensions
Ratings & Reviews
3.8
★
19 Ratings &
0 Reviews
Have you used this product? Be the first to review!
Have doubts regarding this product?
Safe and Secure Payments.Easy returns.100% Authentic products.
You might be interested in