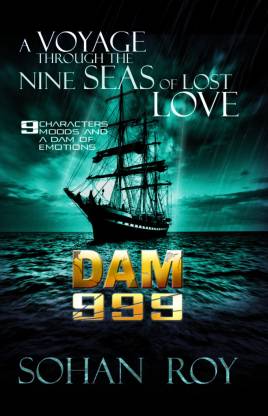 DAM 999 tells a heart-rending story of the corruption that is prevalent in society in the present times.

DAM 999: A Novel is a story that is based on the lives of nine characters. These characters are based on the nine emotions that humans feel which are known as the Navarasa. The story begins with the introduction of two characters that are mariners and have just made their way back home. These mariners are oblivious of the severe political tension that surrounds the presence of an ancient dam. This dam happens to be just behind the home of the mariners.

As the story advances, readers are introduced to another character that goes on to build a new dam in the area. This character is symbolic of greed in human nature. The new dam has been made without keeping in mind any of the necessary safety norms. As a result of this, the lives of millions of people are under threat.

The novelist does an excellent job in portraying the problems faced by the people as a result of the new dam being built and also focusses on their struggle for survival.

DAM 999: A Novel has been adapted into a movie, entitled DAM 999 as well. The movie has been directed by the author himself, and has been produced by BizTV Network.

The author of this book, Sohan Roy, is also a well-known businessman, director, actor, and lyricist from India.

Roy was born in the year 1967 in Kerala, India. He holds the post of the CEO of Aries Group of Companies. Roy has also worked as a Marine Surveyor for six years, prior to starting his own marine company, Aries Marine. His areas of expertise are Surveys, Naval Architecture, and Non-Destructive Testing. Three songs written by Roy were also selected for the Oscars, which were from his movie DAM 999, in the year 2012. Apart from Dam 999, he has also launched Marine BizTV, a global maritime channel, Safe Botel, which is a solar powered houseboat, and Aries Creation, a program for the the research and development of talent in the area of visual media.

its a good book. but at starting you would find it a little boring and wold not understand what is written in the book and why the title of the book in DAM 999. BUT after about 150 pages you would find the story a good one and interesting. In short its a nice and decent book.
READ MORE

Its very interesting and very good novel .Its a story based on human emotions and Navarasa and also this story is fully based on Indian culture very simple and contain a good social message very good!!!!!
READ MORE

I had no idea what was going through my mind when i decided to opt this book to order. May be the title of the book or because the author was new. Well but as i look back on my choice i am glad that i ordered it. It gave me a lot of insight which i definitely didn't know about the marine world. I enjoyed my ride through the marine world.
READ MORE

I think this book is so good and its not boring to read it. I loved it more than any other book I have ever read.Its very and different concept also an interesting story mainly the Navarasa emotions are beautiful and very good
READ MORE

An adequate gift to the masochist reader

Absolutely pathetic piece of writing, this book is. Nearly 95% of this book is meaningless and poorly crafted drivel and barely 10 pages has any relevance to the dam, which has brought this book so much ill earned publicity. Most of the book is a sort of self aggrandizing by the author about himself and merchant marine sailors. Could finish reading this book only through innate obsessive compulsive masochism in me as a reader to finish it and exorcise it out of my system.
READ MORE

I was just going through the collections of books at flipkart.com and i came across this book called DAM999... was not sure whether to buy it or not but the cover page itself attracted me. so i went for it!!! And i should say the choice was not bad at all.. It has a good concept. The language used is simple so that people of every age group can understand it...Aswesome Purchase i must say!!
READ MORE

I am quite choosy about what I read, seeing the news on the movie fly around. I grabbed a copy and sat through the weekend to complete it. I must say the novel is quite interesting. This is sure a collectors edition.
READ MORE