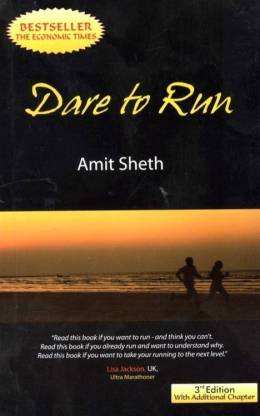 Get notified when this item comes back in stock.
Home
Books
Biographies, Memoirs and General Non-Ficton Books
Memoirs

Dare To Run is a collection of inspiring essays that recount a husband-wife duo’s transformational journey from being amateur runners to finishing The Ultimate Human Race in South Africa.

The year 2010 saw a miraculous culmination of a long and arduous journey in Amit and Neepa Sheth’s life. They had crossed the finish line in the 89-km Comrades Ultra Marathon, South Africa. Dare To Run takes its readers on a journey from that first amateur run in Amit’s life to reaching this pinnacle as a runner. It’s a recollection of the stellar achievement of a husband-wife duo, who chose running as a sport only in their late 30s.

Dare To Run begins with Amit’s reflection of the time of his first run at a beach in Mumbai. That 200 meter jog had nearly proved fatal for him. But it was also the starting point of the story of Amit’s and Neepa’s display of unflinching will, incredible determination, courage, discovery, and self-belief amidst incredible hardship. At the end of it all, they emerged victorious and with memories that they would cherish forever, as they were the first Indian couple to have crossed the finish line of the 89-km Comrades Ultra Marathon in South Africa.

Using a combination of philosophy, poetry, and scriptures, Amit, in addition to narrating his story, elaborates on his perspectives on life, spirituality, religion, and of course, running. The reader is left inspired at the turn of every page, as he or she reads about what this couple could achieve, while still balancing work and family, and training and injuries, which are inevitable aspects of playing a sport.

Dare To Run encourages its readers to chase their dreams and follow their passions. It teaches them to relentlessly pursue their goals and cause amazing success and happiness in life. It also motivates them to be the best in everything they choose and still maintain a sense of balance and appreciation for the beautiful fact that they still exist.

Not only will Dare To Run leave a novice runner inspired and rejuvenated, it will also help the elite athlete recognize his or her own strengths and weaknesses. And for those who don’t run, the book opens the possibility of pushing through one’s limits to conquer what at first looks like an impossible mountain to climb.

Amit graduated from the University of Bombay with an LLB, from UMass Lowell with an MS in plastics engineering, and from the University of Lowell with an MBA. After working as Manager Business Development at General Electric Plastics in the US and the Netherlands, he established Skydomes India Pvt Ltd, a company that manufactures and installs commercial and residential skylights. At the age of 38, he took to running. And over the next several years, he ran over 25 marathons and ultramarathons around the globe. He is the first Indian to have run the 89-km Comrades Ultra Marathon and the Two Oceans Ultra Marathon, both in South Africa. The Comrades Marathon Association has appointed him as the International Brand Ambassador, and the Standard Chartered Mumbai Marathon has acknowledged his contribution to promoting running as a sport in India.

This is what I would call the book, the book is not on running(only) its about life and how you
want to live it. Dare to Run takes you through Amit and Neepa's passion for running, love and respect for each other and the amount of grit and dedication you put in for something you are passionate about. It inspires you to follow your dreams, its inspired me to be a better runner, husband, father and inspired my wife to come on weekend long runs with me.

Every chapter is full of idiom's , poe...
READ MORE

This is a beautifully written book by Amit Sheth. It flows very nicely between his running experiences, its extrapolation to life in general, learning, and some wonderful quotes and stories of eminent personalities(read philosophers). The book is one of the best I have ever read. It gives you a very close and personal look at the ups and downs Amit experienced over the years as a runner, which bring tears of joy and sorrow to your eyes automatically.

Kudos and Hats-Off to Amit, his wife Neep...
READ MORE

one of the best book I have ever read

Are you A runner...if yes please read this book
If not then You must read it but be cautious because you might start it....
Awesome book....the experience shared will inspire you to be a passionate person in life, whatever you may do running, cycling other sports or even non-sports activity its all about your passion towards what you want to do...
READ MORE

Amit Seth is passionate about running and this reflects in his book. He is very humble about his capabilities including how he did not make the Comrades finish line in his first attempt. If you share his interest in running, you will love his book!
READ MORE

Celebrating the joy of running

This book put a smile on my face and made me happy; exactly the feeling I get when I complete a hard run. This book shines with positiveness and it shows through in the writing. Experienced runners and beginners alike can read to experience what you have already discovered or about to discover when you start out on a wonderful journey called 'running'. Non runners can hope to get a glimpse of why we runners do what we do - RUN. The craziness, pain, dejection, injuries, ecstasy, joy, bliss, an...
READ MORE

It not just well written but Author's examples on how his lifestyle got changed, how he find running liberating, how running is spiritual are simply outstanding and how running is not just a physical activity its a way of life now.

Hats of to AMIT !!
READ MORE

Great Book for Beginners as well as for Pros

This is the second book that i have read about running, and believe me this is a very good book. Amit describes his running and marathons in such a Fantastic way, it keeps you hooked. Also, there are so many interesting Chapters... my favourite one is 'Running makes you a Sex God'.
If you like Running, or want to start Running, then dont think twice to buy this Book. Also it is much cheaper as compared to other Foreign Authors.
Happy Reading :)
READ MORE

I was quite excited when the book came out. Thanks to a fairly hectic travel schedule, I could not make the book launch and paid the price by having to wait and search and search, until Crossword ended my misery by couriering the book to me ! I ( and am sure a lot of us ) know Amit and Neepa as rather heroic figures who routinely run distances that most wouldn't even dream of. To me personally, chugging along at my usual gentle trot at BNP, these guys have always seemed a little superhuman. S...
READ MORE

The common man's running inspiration
This book is an easy read for anyone interested in a real-life account of a modern day dad and husband
I found Amit to be down-to-earth and humorous, soaring with poetry and running, and crashing down with our all-too-familiar human weaknesses; as one reads, one identifies with the same! While meandering through life, learning to enjoy the journey more than the destination. Live,love,laugh and enjoy what you do and do what you enjoy!
"Dare to Run' uplif...
READ MORE

Story of Grit and Determination

It is a excellent read and must say is very encouraging for Runners and Non-Runners alike.I bought it @ Auroville 2010 expo and finished it in one go through the night and wonders of Wonder clocked my PB of 1.48 Hrs in Half Marathon the next day,so it is close to my heart.
Speaks about the Highs and Low -Emotions and training , that Amit (and Neepa) goes through before they reache the Pinnacle of Comrades.
Would defintely recommend for anyone who is hooked onto running.
READ MORE

0
0
Permalink
Report Abuse
+
All 20 reviews
Have doubts regarding this product?
Safe and Secure Payments.Easy returns.100% Authentic products.
You might be interested in