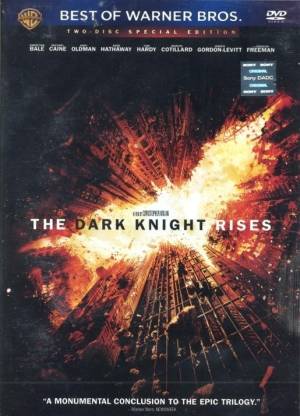 The Dark Knight Rises is an American superhero film that was released in 2012. Based on the tales of the DC Comics character Batman, this is the final installment in Christopher Nolan’s trilogy of Batman movies. Starring Christian Bale, Tom Hardy, Anne Hathaway and many other promising actors, The Dark Knight Rises revolves around Batman’s resurgence into the crime stream of the city of Gotham as a new foe named Bane threatens the well-being of its citizens. Despite the contempt that Batman faces at the hands of the people of Gotham, and despite being put through an intense span of trials and tribulations, a guardian of what's right, the dark knight rises.

3) Beneath Gotham- Director Christopher Nolan and the production designers discuss the design and build of Bane's lair.

5) Batman Vs Bane - The filmmakers and actors reveal how they planned and shot t he epic fight sequence between Batman and Bane.

6) The Bat - Director Christopher Nolan gives Batman a new mode of transportation in The Dark Knight Rises. Learn what went into the of flight. Also discuss the sound engineering of the signat, how a combination of special effects, visual effects and sound engineering were used to realistically sell the illus

8) The Pit - The filmmakers explain the design and construction of two giant, vertical sets: the underground prison and the well

10) Demolishing a City Street - Learn how a series of practical special effects were used to simulate the complete destruction of a city street. 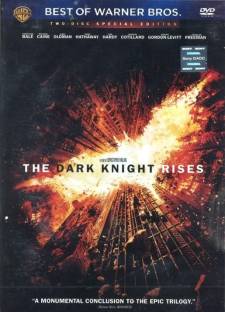 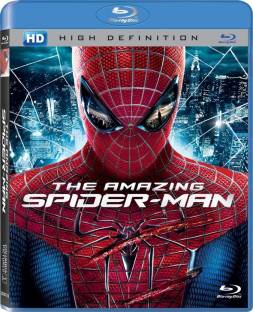 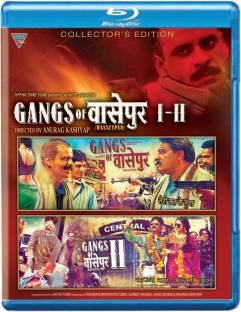 Perfect end to a great trilogy

I had watched this movie in hall twice already and yet I ordered the DVD to complete my Batman trilogy collection. After all you don't know when will Christopher Nolan again direct a trilogy.

I had preordered the DVD and it arrived even before general release. So that was a nice surprise. I am a bit disappointed with the comic book as I was expecting a new story. Instead it is just the first 20 minutes of movie in comic form.
I am hoping that I will be one of the few lucky customers to get t...
READ MORE

The Legend Ends...In An Awesome Way...

I Pre-Ordered this movie (DVD Version) on Oct 10, 2012, and it was delivered to me on Nov 29, 2012, which is a day before the actual release date...very satisfied with flipkart's pre-order service.

About the Box Contents of the 2-Disc Special Edition DVD:-

The Bat logo on the outer sliding cover of the DVD...
READ MORE

I have watched this movie 4th time after purchasing. This is not just a movie they have made, much more than it. The making is more entertaining than the movie itself. It dosen't seems Cris Nolan has gone so deep in making it, clearly it outscores earlier two in terms of story, finishing, action, emotion. Will recommend for every one to watch it highly.

Last flipkart service has bitten my tongue for their services. It is not clear how they continue giving such service, other online store sh...
READ MORE

I BOUGHT THIS DVD FROM ANOTHER WEBSITE WITH HIGH EXPECTATIONS BUT I'M REALLY EMBARRASED WITH THE PICTURE QUALITY. IT'S SEEMS LIKE PIRATED(BUT IT'S ACTUALLY NOT!!)
UNDOUBTLY THE MOVIE IS REALLY GOOD BUT THE DISPLAY IS YUCK!!!!
INDEED ONE MUST PREFER TO BUY BLUERAY
READ MORE

I have seen only the before part of this rises. I love the fantasies n comic hero's. I liked the before part so I think this part also will be good. This will be good movie those who love fantasy n heroic movies. That the technology those shown in the movie are all awesome thing.
READ MORE

Like the fellow batman fans all over the world, i was excited to watch this movie when it released in India. O boy! Nolan did not let us down. This is the best conclusion ever that could have happened to a movie trilogy. The tale of Batman taking on Bane who is a perfect match unfolds in a magnificent manner that will leave the viewers highly satisfied.

This is one joy ride you would never want to miss.

Nothing Short of a Great Movie

Calling this a 'Spectacle' will still be short of what it deserves to be called.

An amazing way of telling a story. Kudos to all the actors for such a brilliant performance.

I wish there was more to come but unfortunately, this ends here. A GREAT series.

Awesome work Nolan.....waiting for your next movie.
READ MORE

THE DARK KNIGHT series ( this is pure madness)

FIRSTLY coming to the movie it dosent need a review coz this trilogy is an EPIC u gotta own it at any cost !! THE DARK KNIGHT RISES :D is bigger better and the best :D
secondly what i have to say is the DVD formats clarity is a bit low nowadays is bluray discs the reason behind it ?? firstly i got the VCD formats of BATMAN BEGINS n THE DARK KNIGHT was not satisfied and then got the COMBO DVD pack of both the films was satisfied with it and today got this dvd but again the clarity is a bit low...
READ MORE

I have been a fan of the current Batman series. The latest did not let me down either. It's a good conclusion to the Batman series. However this is not the best - the Dark Knight was the absolute best
READ MORE