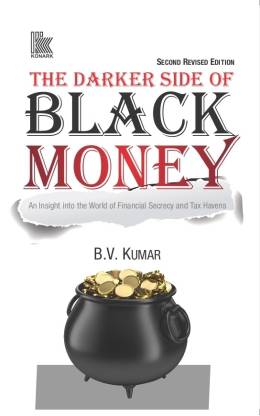 The Darker Side of Black Money (English, Peparback, B. V. Kumar)

The Darker Side of Black Money  (English, Peparback, B. V. Kumar)

When former Swiss banker Rudolf Elmer handed over information about bank accounts of over 2,000 individuals to WikiLeaks, it stirred the world. This was probably the first step towards the opening of a closet of skeletons, and skeletons they were of politicians, god men, terrorists, oil barons and kings. The details are still awaited but even then, the fact largely known but seldom acknowledged, primarily because of the high-profile names attached with it, has hit the headlines both in India and abroad.

The Darker Side of Black Money discusses this ugly side of dirty money and the murky hands that handle it and tells us how everyone from the banks to individuals, fathers to sons, politicians to mafia dons, god men to terrorists-all follow every possible trick to clandestinely hide their large, unaccounted cache of black money from friends and foes alike.

It talks about the demand and supply of secret money and how the likes of Swiss banks carve rules that clearly mean? Come, hide it with us". It discusses various terms such as money laundering and drug trafficking that are often used but not always understood. Besides, it explains why certain countries, termed as tax havens, are more conducive to such stashing of cash.

Unfortunately, the problem doesn't end with hiding the money. In fact, it begins here. From funding terrorism to destabilizing a government, this dirty money comes in handy in everything that is murky and illegal. This book unfolds the mystery and explains the modus operandi of this dirty money business.

This revised edition includes new material on the rise and growth of criminal organizations, traces the origins of tax havens, a comment on Indian corruption among other topical issues and new examples and case studies.

About the Author
B.V. Kumar joined the Indian Revenue Service in 1958 and held various coveted posts in his 35 years of service. He was the Director General Revenue Intelligence, Director General, Narcotics Control Bureau and Director General, Economic Intelligence Bureau. In his tenure he was responsible for busting many syndicates operating trans-nationally, smuggling contraband, drugs and organized economic crime. He was responsible for detaining and prosecuting some of the top smugglers and tax evaders. The Illustrated Weekly of India in a
front cover called him The Super Sleuth".

He also held the post of Member, Central Board of Excise and Customs. Mr Kumar has represented India on various occasions such as International Conference held at Vienna for drafting the UN Convention against Illicit Traffic in Narcotic Drugs and Psychotropic Substances, 1988, and various Interpol meetings held between 1985 and 1988 and led the Indian delegation for SAARC Technical Committee on Drugs. Besides, he was elected President of the Drugs Committee during the Interpol Conference held in 1987, in Nice.

He has authored The Preventive Detention Laws of India and co-authored The Narcotics Drugs and Psychotropic Substances Laws of India. He has published a number of papers on law, taxation, terrorism and organized crime.