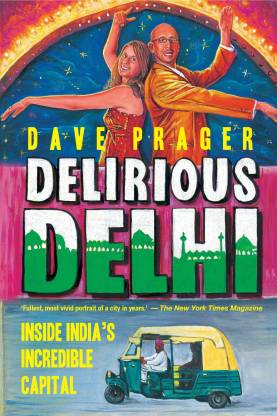 Delirious Delhi: Inside India’s Incredible Capital is Dave and Jenny’s first-hand experience travelling in Delhi. They share stories, with a sprinkle of humour, about food, traffic, ancient monuments, blaring car horns, and more.

Delirious Delhi: Inside India’s Incredible Capital is the story of how two Americans explore the capital of India, Delhi. Dave and his wife Jenny were just plain old Americans living in New York, when Dave received an opportunity to work from Gurgaon for a period of eighteen months - a chance that the couple pounced on.

Delirious Delhi: Inside India’s Incredible Capital is the account of the couple’s experience in the city of 16 million people. The first thing that takes them by surprise is the listless honking on the road, where all the vehicles blare their horns at the same time.

Dave and Jenny realize that India is all about energy, vibrancy, contrast, and ecstasy. It is a city in which everything seems to be true simultaneously. The two explorers see how ancient historic monuments that are hundreds of years old stand right next to fancy modern shopping malls. They step into luxurious offices in high-rise buildings and observe the chaotic traffic jams on Delhi’s roads. They try to understand the philosophy behind the actions of the locals, and even talk about the system of ‘jugaad’, which they define as a ‘duct-tape arrangement’. They share their love for Old Delhi and elaborate on how it is a collection of different thrilling moments that vanish before they can be comprehended.

In Delirious Delhi: Inside India’s Incredible Capital, Dave writes about his love for Indian food. The book starts with an instruction to ‘Eat more butter chicken’. From chhola bhaturas, dosas, rolls and kulfi, to their cook’s dishes like baingan ka bharta and palak paneer, Dave writes about his gastronomical adventures as well.

This book covers Delhi entirely, highlighting the good aspects about the city and the bad aspects equally. Contrary to superficial accounts that tourists usually write about a city, especially one with such a different culture, Delirious Delhi: Inside India’s Incredible Capital serves as an in-depth account written about one of India’s most colorful cities. The comic style of writing is well-balanced with facts, and the book is perfect for those who have been to Delhi, are planning to go to Delhi, or want to experience the real Delhi.

Dave Prager is an American copywriter from New York.

His most popular book is Delirious Delhi: Inside India’s Incredible Capital.

Prager worked as a copywriter in New York City and lived there for eight years. His job required him to move to Gurgaon, India, for one and a half years - an offer that he enthusiastically took up. Dave and his wife Jenny were extremely eager to shift base to India and indulge themselves in the goodness of Indian food. After living in India, the couple moved to Singapore for a year, following which they moved back to the United States. They now have a little daughter named Georgiana. Prager maintains a blog called Our Delhi Struggle and has also written for Gulf Life Magazine, The Caravan, and The New York Times. He was inspired to write Delirious Delhi: Inside India’s Incredible Capital after falling in love with the capital and its culture. 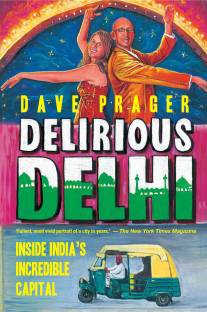 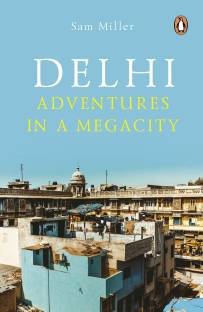 I've seen other books about first experiences in India, and there's still that feeling of an outsider looking in. Dave's book is refreshingly different - his writing puts across a sense of belonging, and a love for the city (that is sadly not shared among a majority of Indians, for whom it will remain the rape capital).
Move over, Lonely Planet. Whether you're a first time visitor or a long time resident, you will love this book. The hilarious accounts of travel by auto and bargaining in shop...
READ MORE

Refreshing read by a non-Indian on Delhi

You can read the full review here on my blog - http://blog.fatema.in/2012/10/book-review-delirious-delhi-by-dave-prager

India is a country of many hues, of opposites existing together, of both extremes being possible. It is a country you both love and hate at the same time and here its possible to do that. And Dave understands this; his book is all the shades of grey. I enjoyed reading Delirious Delhi and smiling and nodding along-side it. It was refreshing to read a book by a non-Indian wh...
READ MORE

This is a bloody awesome book... doesn't stereotype and provides an honest account of the magical city called Delhi - my hometown I loved reading it and made me nostalgic throughout...

Great humorous anecdotes which I could relate with and they made me howl with laughter - my wife can vouch for that ;)

Must read for everybody - not just Delhites!!!

Delhi through an Expat's viewpoint

As the author mentions, the book is for expats to understand Delhi and delhiites to understand expats. The book to be precise is not about Delhi, it’s a journey of the author where he very interestingly compares cultures. Unlike many tourist who come with a narrow mind, the author tries to accept things and thus presents a deeper analysis of the city and its life.

If you want to know more about Delhi then this book is not for you, but if you want to add another layer to things that you alre...
READ MORE

Wonderful insight into life in Delhi

Very well written book with loads of humor, quirky places, and a very honest opinion about life, food, people and more of Delhi. Being from Delhi and having stayed there for most my life, it is very easy to relate and understand everything that they go through when trying to adjust to the Delhi flavour of life.

I enjoyed reading it a lot - must for tourists trying to live in Delhi, and recommended for people from Delhi who miss everything about it in their new city (in my case Bangalore).
READ MORE

This book is simply awsome. While i have read many books on Delhi, never have i seen an author writing straght from the heart. All over the book, you can see Dave's love for Delhi and his genuine liking for the city. Its a brilliant book with intelligent insights and very keen obesrvation on Delhi life. Its adequately humoured and after reading the book one feels as if you know this couple for long and would be more than happy in inviting them home for a home cooked Indian meal..:) ALl the be...
READ MORE

I read this book as both a local Indian as well as an American tourist since I am both. I learned so much about Delhi I never knew. I highly recommend this book to anyone travelling to India for the first time. It's a fantastic read!
READ MORE

As an expat myself I love reading about how other foreigners perceive Delhi and have learned to adapt to the Delhi lifestyle.
Dave has done a wonderful job of putting into words so many of the things I could never describe. He brilliantly explains why Delhi is what it is and how it may evolve... hopefully not beyond recognition.
Great read for Indians too so they can understand how foreigners perceive their culture and why we perhaps behave strangely in their eyes.
This book has reminded me t...
READ MORE

Dave's book on Delhi is a truly honest account of what expats face in Delhi / India. As an Indian (an proudly so !), I have met and interacted with a number of expats who have rather mean things to say about India and Indians. I do understand that things look and feel different looking at it thorough their eyes but always wished that they would understand the sensitivities of people around them. Delirious Delhi made me change my perspective of expats.

Informative and written from the heart

I did not take me too long to finish this one.The book is captivating and full of humour.I am amazed at the kind of detail author has gone into while describing places,anecdotes related to the city.How could an expat remember and capture so much when places have names not in his native language?
Nevertheless,it does suffer from nitpicking and sweeping generalizations at a few places.Mind you,no two situations are same in the city.I can relate to his sentiments for the poor in the city.The sto...
READ MORE