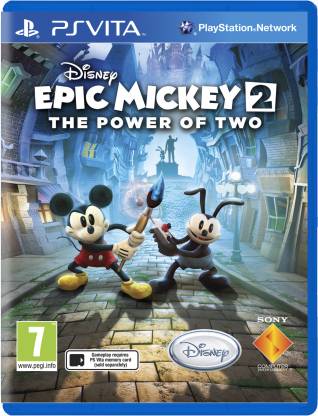 Disney Epic Mickey 2: The Power Of Two (for PS Vita)

Disney Epic Mickey 2: The Power Of Two  (for PS Vita)

The Disney games that have released so far have always been captivating and fun to play.  Getting to play as Mickey Mouse will also help in getting players more interested in the game. The Disney Epic Mickey 2 game will feature the lovable Mickey Mouse with one of Disney’s oldest and most loved characters of all time, Oswald the Lucky Rabbit. The duo will be able to set out on an adventure together filled with creativity and passion. The game, Disney Epic Mickey 2: The Power Of Two, has been developed by Disney Interactive Studios for the PS Vita.

A co-operative game play mode has been followed in the game, allowing the player to control Mickey and inadvertently control Oswald as well. Mickey is armed with a magical paintbrush, containing paint as well as thinner. Oswald has his remote, which allows him to control electricity. The duo will have to forge an alliance to thwart the bad guys who reside in Wasteland, the place where forgotten Disney Characters and Theme Park attractions are discarded. It is up to the two, to be triumphant and tackle different challenges that will be faced in Wasteland. The game has a PEGI rating of 7.