If you are the kind of person who goes wild about cricket, this is the extravaganza you have been waiting for! A single-player/multiplayer sports video game for the PS3 console, Don Bradman Cricket 14 was developed by Big Ants Studios and published by Tru Blu Entertainment. This game honours Sir Donald George Bradman, an Australian cricketer who is considered by many to be the greatest Test cricket batsman ever. Due to his extraordinary accomplishments as a batsman, he was inducted into the ICC Cricket Hall of Fame.

Having received a PEGI rating of 3, Don Bradman Cricket 14 is more advanced in many ways in contrast to previously released virtual cricket games. Featuring a built-in player creator and a 20 year career mode, you can live out the life of a masterly cricketer in the confines of your home and take your player through the ranks to attain international glory by competing against challengers from all across the world.

Download players, teams, competitions, tours and umpires created by other players online and upload yours too. When playing online against another challenger, one can save the progress of the game midway so as to resume it later. With brand new batting, bowling and fielding control schemes, you can change up your tactics unlike ever before.

The fielding system that has been implemented in this game allows you to run the ball down and slide to prevent a boundary, catch a high ball that's a potential sixer or knock the stumps down to claim a run out. You can appeal manually in-game and it will be assessed by an electronic review system, hence, if you feel that the batsman was supposed to be out due to an LBW, you can suggest it to the umpire and he will decide. However, excessive unnecessary appealing will make the umpire take decisions on a 50-50 basis.

Don Bradman Cricket 14 is much more realistic that other cricket games as the pitch degradation, time of day and weather system information implemented are based on real world data. Perfect your skills by practising behind the nets or play a practise match to up your game and become the best. This game also features an unprecedented full 360 shot control for batting and ingenious line and length bowling mechanics. With enhanced ball physics that allow realistic bat edges, ball movement outside the pitch and bat pad catches, you are bound to have an ecstatic time playing this wonderful and captivating game.

Thank you Big Ant Studios, and STOP the Cribbing guys.

Like every other cricket frantic, I have been waiting eagerly to get my hands on this game. For months I have been following trailers, videos, Facebook pages like crazy to know when the game would release, or if it would have the same fate as Ashes Cricket 2013. Finally, to my relief the game release date was confirmed. And I immediately came to Flipkart and placed an order.

Now I notice a lot of folks complaining about the game pricing. Instead of cribbing we need to come forward and su...
READ MORE

This is unlike previous cricket games. Price is high but it is worth it.

1. Batting controls are stunning. Can play any short.
2. Various display modes is awesome. View through helmet makes you feel you are actually playing.
3. For the first time emphasis has been given to bowling and fielding. You'll love what you can do as a bowler. The variations, the speed, the revolutions in spin and the list goes on.
4. Career mode is mind blowing. You start off as a 16 year old and climb your ranks....
READ MORE

This is definitely the best cricket game!!better than all the previous games!!!Though it lags little bit things!!! Here r some of the pros and cons of d game-
Pros-
1:a fully updated cricket roster having all the major and minor players!!!
2:a new review system
3:u can create players,match types,tournament,tour,fielding and even umpires.
4:players face really match their real faces!!
5:advanced controlling allowing u 2 appeal manually,fielding,taking catches,diving and it gives a feeling of p...
READ MORE

Amazing game, worth every penny.

Pre-Ordered this on the day it was up on Flipkart - and am not disappointed at all.

For the second time ever, I have spend that big on a game (first was GTA V) and but given that I had been following the progress of development on PlanetCricket.net (http://planetcricket.net/forums/don-bradman-cricket-14-forum/) I knew what I am going to get.

One of the best cricket games I have ever seen, However, if you truly want to enjoy real cricket teams you have to have xbox live (not the full version, just some form of it) and then you have to download the real teams. Great game 10/10!
READ MORE

the game is just fantastic..its almost real time cricket simulation…but it is really tough to play and they dont train you hot to play there is an mode to practice but timing and everything is to be figured by you
online gameplay is good but if the person you are playing against is stupid you are doomed
he ll keep on appealing and a 10 over game ll feel like 100 overs

and flipkart before they introduced one day delivery they used to deliver the product very soon but after this one day deliv...
READ MORE

it is great to have such a great game but one thing which is missing is scenario like in ea 2007 . I would suggest this game to hardcore cricket lover .The gameplay is awesome except one or two minor bugs . but that will be soon corrected . The career mode is really a tough one . If the game featured some scenarios i would have given it 5/5 .One must buy it if you are willing to play some serious cricket on your PS3 and talking about the price it should 3000 and not 3500 .

VERDICT : Go for it
READ MORE

MASTERPIECE WHAT A GAME HATS OFF !!!

The best cricketing game i have ever played. Its best in everything.People who are saying its bad they are crazy (No offence) or they do not like cricket.I agree that it has a bit difficult but through out its awesome .
Like :-
1-We could review to the third umpire
2-We could set our own career.
3-Players are with proper name
4-We could appeal whenever we want
Its all up to us. Excellent graphic I would love to give 10 stars to it but....
I suggest everyone to buy this masterpiece...........
READ MORE

The BEST cricket game of all time. Very realistic with lots of features which u haven't experienced in any cricket game yet. Its quite challenging and will take atleast 3-4 days to get use to the controls but after that u cant stop playing. Personally i like to play online matches but career mode is also fun. And yes one of the best feature is cricket academy in which u can create your own team and u can also replace default players with players created by online community members having corr...
READ MORE

good game but flipkart dissapointed me 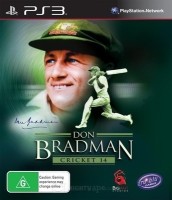 Don Bradman Cricket 14 is a sports video game which has single player mode as well as multiplayer mode.

A delight for hardcore cricket fans, Don Bradman Cricket 14 has a realistic gameplay and is considered as one of the most advanced cricket console game of the decade. The fun gameplay involves advanced batting and bowling controls, fielding with full control of the field, and career mode. Also, the game lets you challenge the umpire on questionable decisions.

Don Bradman Cricket 14 has received a PEGI rating of 3 which makes this entertaining cricket game suitable of everyone, irrespective of age, to play.

Don Bradman Cricket 14 is distributed in the optical disc format. This advanced cricket game is designed for the PS3 console.