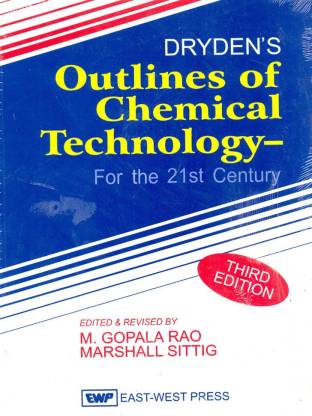 Chemical Engineering is the branch of science that merges the use of physics, chemistry and life science with economics and mathematics for conversion of chemicals and raw materials into other products. Dryden’s Outlines Of Chemical Technology For The 21st Century 3rd Edition covers topics like Inorganic Chemical Industries, Natural Product Industries, Orientation, Polymerization Fundamentals, Metallurgical Industries, Synthetic Organic Chemical Industries, Toxic Chemicals and Pollution Controls. It also has detailed information on the highly ranked Indian chemical industries and has detailed notes for teachers.

The book was published in the year 2010.

M. Gopala Rao is a professor for chemical engineering at Howard University. He obtained his doctorate from the University Of Washington. In the past, he has served as a chairman at IIT-Kanpur.

Marshall Sittig works at the Research Administration Department at Princeton University. Other books by the author are Pharmaceutical Manufacturing Encyclopedia and Handbook Of Toxic And Hazardous Chemicals And Carcinogens. He completed his Bachelors in Chemical Engineering in 1940 from Purdue University. He has worked at Ethyl Corporation and Du Pont.

The book is appreciable if you're using it for you undergraduate exam only. Most of the data and processes are outdated as the book hasn't been reviewed since 1992 I guess, only reprinted. Not useful for post graduates or working people. Shreve's Chemical Process Industries is a better opinion then.
READ MORE

Book is in good condition and is of good quality.
READ MORE

Sorry for the late review
But the product is genuine
And delivery guy is so helpful in navigating my address which is quite complicated...and he is humble and very gentle person
READ MORE

Yaa this is a good book for learning🙂
READ MORE