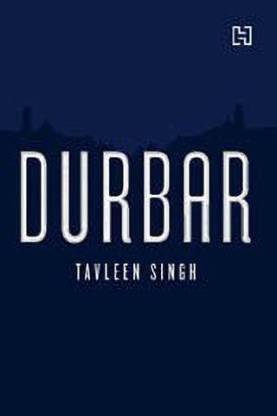 Durbar is a bold narration of most of the unheard stories from the corridors of power at the central government. It is one of the best-selling books, a memoir, authored by Tavleen Singh.

Tavleen Singh was not even twenty five when she joined the Statesman as a junior reporter. This memoir begins from the time the Emergency was declared by the then Prime Minister Indira Gandhi in the year 1975. The book unravels the nation’s distressed state of waiting for a change in politics in those unfortunate years. Post Indira’s assassination in the year 1984, Rajiv Gandhi came to power. But the intricacies of India’s myriad faces were still unattended as ineffectiveness and nepotism plagued the highest levels of government at the centre. This book chronicles the story of India’s struggle in those unsettled years. The calamities, carnage and revolts, both internal and external have been overwhelmingly recorded by the author who was, at one point of time, one of the insiders involved in society dinners and election campaigns with some of the authoritative leaders in the same corridors of power.

Tavleen Singh is one of the most renowned Indian journalists and an author of best-selling books like Kashmir: A Tragedy of Errors, Lollipop Street: Why India will Survive Her Politicians and Political and Incorrect. She has been associated with The Statesman, The Telegraph, the Sunday Times, London, India Today, The Hitavada and The Indian Express. She has also been associated with STAR Plus television channel. She currently writes columns for Amar Ujala and Jansatta in Hindi and a column in English for The Indian Express.

Ms Tavleen Singh has written an interesting book - "Durbar". The book starts with the imposition of emergency, deals with the rise of Mr. Rajiv Gandhi as a politician and ends with his unfortunate assassination. Ms Tavleen Singh worked as a reporter/ journalist in the 1980s and also met the rich and powerful over innumerable lunches and dinner.

Written in a conversational and a narrative style, Ms Singh shares her sharp observation skills that convey more than what the spoken word convey...
READ MORE

Tavleen Singh at her best!

Durbar is an excellent first hand account of some of the most turbulent years in the history of independent India. Tavleen Singh has given an authentic description of landmark events like the Emergency years, failed Janata government experiment, return of Indira Gandhi, turbulent Punjab, anti Sikh pogrom following Mrs. Gandhi's assassination, rise and terrible fall of Rajiv, Bofors, V P Singh, Kashmir etc. Almost every important event has been covered by the author with absolutely genuine inf...
READ MORE

Book could have been titled Congress Durbar or Rajiv Durbar for that matter. Tavleen Singh is a known face in Indian journalism and apart from all known facts, what one comes to know Is acquaintance of Tavleen singh with Rajiv and Sonia and Delhi drawing room revelations during seventies and eighties.

Surprisingly Tavleen has left the hep and happening nineties totally untouched, may be we may expect a sequel of Durbar soon.
Book starts of with the news of Rajiv assassination and then takes...
READ MORE

Travelled through the time while I was not born at all....Must Read!!!!!

I have always having a limited knowledge about Indian's troubled time since I was not born then. I completed this book in 1 week & really enjoyed the journey through all the chapters. I appreciate the writing from Tavleen Singh since she was a super woman to be at everywhere in all the tragedy Indian through. She has written so well that through out the read I felt I am in 70s-80s era & everything was happening infront of me.

Thanks Tavleen for such a great book!!!!!
READ MORE

A marvellous book from an honest journalist

Children do not like history even though it can be the most exciting subject in the world. That is simply because the usual historian is staid and dry, he writes because it is his job and dignifying it amounts to raising his own worth as a professional: Too boring for the reader more often than not!

The same events told with flair and wit bring it to life in a way that leaves a lasting impression on the mind, and we become like children, eager and impressionable. Even if this was not so, i...
READ MORE

Amazingly well written and a must read

Just finished reading it and I must say that its one of the best books I have read. The book gives an account of the happenings in India during the 70s and 80s from someone who has seen Indian polity from very close quarters. The book covers some of the most defining events of post-independence India like Emergency, Mrs. Gandhi's assassination, Sanjay Gandhi's death, Insurgency in Punjab and Kashmir in great detail while giving a perspective on how these events led to some of the good and bad...
READ MORE

Well written and documented. It does not sound biased. The writing is very well structured and feels like watching a good political non-fiction movie at times. Highly recommended for those who are interested in Indian politics, especially during the Indira Gandhi- Sanjay Gandhi time.
READ MORE

Since I am regular reader of Indian Express column every Sunday, this book was natural buy. What a book with such an account of contemporary history. Also very good to know that we had some good journalist's among the arm chair ones we see today in the TV studios.

The book gives detailed accounts of the period and first time for God's sake dissects the achievements in logical fashion. Tired of the hagiographies for the first family of India. I recommend all to read it once.
READ MORE

This is one of the best books that I have read so far. Tavleen is an amazing writer. The book though talks about the Indian history, it never bored me. I was hooked to the book till the end. What really made this book stand apart from the rest is the fact that while reading you can actually imagine everything happening right in front of your eyes.
I can't wait to read more from this author.
READ MORE

A very good take on the Rajiv times in Indian History. The author has presented an unbiased view of the political scenario of the post emergency to Rajiv Gandhi era. The closeness to the Gandhi family brings out some interesting moments in the book . Overall, quite an enjoyable read, if you are into Indian politics/ Modern history of India
READ MORE

0
0
Permalink
Report Abuse
+
All 51 reviews
Have doubts regarding this product?
Safe and Secure Payments.Easy returns.100% Authentic products.
You might be interested in