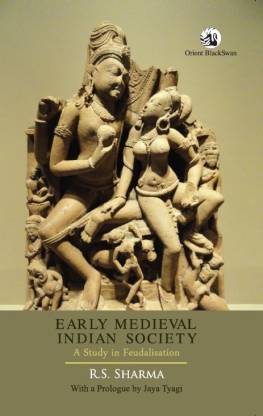 Description
The traditional view of feudalism, defined by scholars like Karl Marx and Marc Bloch, describes a system where a dominant social group controlled ownership of land and enjoyed the benefits of labour of servile serfs who toiled to generate produce from land. While this model was based on conditions in Europe, Marx felt that this did not apply to medieval India as most peasants were technically free land-owners.

R.S. Sharma goes beyond this traditional view of feudalism. In his Early Medieval Indian Society, he shows how dominant groups used techniques such as land-grants, control of common services, caste and religion to gain control over the means of production. R. S. Sharma explains how despite differences from the European model of feudalisation, similarities in economic traits like decline of towns and long-distance trade, reduction in the usage of metal coins and the establishment of a subsidiary market economy made the feudal model a useful tool to understand this period. He uses feudalism to trace the emergence of early medieval India and to also understand developments in art, religion, literature, polity and society.

The Prologue to this edition is a fitting tribute to the author by Jaya Sinha Tyagi, a historian of ancient Indian history. Analysing R.S. Sharmas pioneering study, she charts this erudite historians contribution to the transformation of the study of early medieval India. She also explains why this book continues to serve as a critical resource material for tracing the economic changes in history.

R. S. Sharmas seminal work will be invaluable for students, scholars and teachers of ancient and medieval Indian history. It will be useful to readers interested in studying transitions in socio-cultural ideologies and institutions from the early medieval times.
Read More
Specifications
Book Details
Contributors
Ratings & Reviews
3.9
★
37 Ratings &
3 Reviews
4

I am giving 4 stars because of the careless packing . But the service was good and fast. Good purchase .
READ MORE