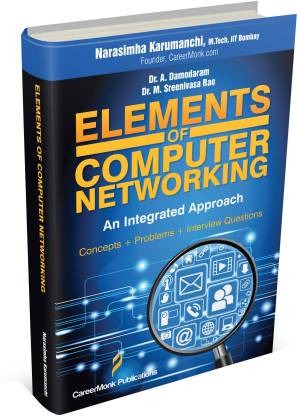 A. Damodaram, Narasimha Karumanchi, M. Sreenivasa Rao’s Elements of Computer Networking: An Integrated Approach 1st Edition for people who want to learn more about computer networking. The book comprises of 17 chapters which include networking devices, LAN technologies and other such topics for easy grasping so as to give you a better understanding of the subject.

Narasimha Karumanchi is an Indian author and a former software developer. He has authored several books on data structures, algorithms and design patterns. Karumanchi has penned down books like Data Structures and Algorithms For GATE: Solutions to all previous GATE questions since 1991 1st Edition, Coding Interview Questions 1st Edition and Data Structures And Algorithms Made Easy In Java 2nd Edition 2nd Edition.

Dr. A Damodaram is a faculty at the Computer Science and Engineering Department in JNTU. He has assumed multiple roles in the university and made immense contribution to the growth of the university. He has co-authored the book Elements of Computer Networking: An Integrated Approach 1st Edition.

M. Sreenivasa Rao is the current Director of School of IT and also a professor of Computer Science. He has co-authored the book Elements of Computer Networking: An Integrated Approach 1st Edition. 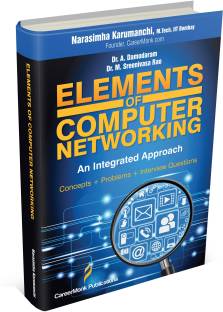 Best resource for self study

I have selected this book as I have read the data structures and algorithms for GATE book from same author and publisher. I had a doubt if it is really good or not. But the book is awesome.!! I love this book. This is one of the best one available in the market.

This book covers all the problems needed for GATE preparation.
READ MORE

This is good for two things.

1. It covers all the GATE syllabus. Most of the existing books in market does not cover problems much. But this book fills that gap. Due to that, it helps GATE aspirants with good concepts and problems.

2. The presentation and formatting of the book is too good and it maintains font size so that we can read the book with no much strain.

Overall, it is more useful for GATE students.
READ MORE

It a made easy type book. It may be used with a text book. Questions & answer are very good and easy to understand.
READ MORE

One Of The Best Book to Learn Computer Networking-Enjoy Reading

One of the best book to learn computer networking. Its short & sweet. Some language improvements can be made by consideringratical issues. Overall book is best to learn computer networking in a short period of time. As networking books like tanenbaum contain much more extra stuff, so take much time to read. But this book is provides much enough knowledge about networking concepts. Also solved problems help to crack GATE exams. Book is easy to understand and concepts are explained with nice pr...
READ MORE

This is high-level college work, and can be heavy on math in places for the casual reader. I 've benefited tremendously from it in my career. The text has covered problem very well. Highly recommended!
READ MORE

Useful for specially for GATE

After the data structures and algorithms book from same author, I purchased this and this book is also very useful. Even though this book might not help interviews but useful for GATE.
READ MORE

I have this been with my friend at Made EASY academy in Delhi and bought this.

This is useful for GATE exam.
READ MORE

Its copy of Kurose, Peterson Davie and Yeah! all gate previous year questions.. No proper explanation... No standard at all..
READ MORE

The authors should be sued for plagiarising the work of other people which includes various WWW pages and blogs and books.
READ MORE

dont rely on this or you will fail

This book wont help u gain much understanding of the subject ..if u just want knowledge of networks for interviews its ok ..but dont rely on this as ur single source
READ MORE

1
5
Permalink
Report Abuse
+
All 13 reviews
Have doubts regarding this product?
Safe and Secure Payments.Easy returns.100% Authentic products.
You might be interested in