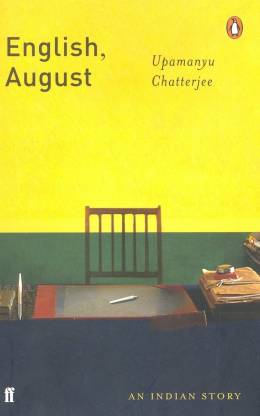 English, August Screenplay is the screenplay of the landmark film adaptation of Upamanyu Chatterjee’s novel.

A long-awaited release, this book brings readers the screenplay of Dev Benegal’s adaptation of the original novel. It tells the story of Agastya Sen, also known as August. A new government job takes August to the hottest town in India, where he is surrounded by incompetent co-workers. He feels left out in this new environment, and begins to use drugs and daydreams to find a way out. The comedy that ensues has made this story one of the classic movies of recent times.

Upamanyu Chatterjee is an Indian novelist and civil servant working as Joint Secretary to Government of India in the Ministry of Defence. An Indian Administrative Service officer from Maharashtra Cadre, he has also written: The Last Burden, The Mammaries of the Welfare State and Weight Loss.

Dev Benegal is an Indian director and screenwriter. English, August was his first movie.

English, August was adapted from Upamanyu Chatterjee’s novel, English, August: An Indian Story. The movie is considered to be a landmark in Indian contemporary film. It won the Silver Montgolfiere and the Gilberto Martinez Solares prize for the Best First Film at the 1994 Festival des 3 continents, the Best Feature Film in English at the 1995 National Film Awards, India and a Special Jury Prize at the 1994 Torino International Festival of Young Cinema.

Wonderful insight into the life of a trainee bureaucrat.

The Book is written in a very lucid style and contains many humorous and entertaining elements.
Great work done by the Author and a Book presented in a very simple and sober manner.
*****
READ MORE

Nothing great but a simple read. Author tries hard though.

The book is not really that great what other comments would lead you to believe. The book seems to be a simple account of an IAS trainee and it seems the book is written with as dull and uninteresting mindset with which Agastya (protagonist) drags his existence throughout the book. Nothing engrossing ever happens. The book just leads on and on...Certainly not a must-read book for any aspirant.
READ MORE

Its said that the sign of a good book is that it gets better every time you read it. In that case this is a great book as I've read it thrice and it never ceases to amaze me. Filled with vivid imagery and memorable characters this book is a delight to read. Drawing a fine balance between seriousness and laugh out loud dialogues, this coming of age story of an urban centric, primarily english speaking Indian youth suddenly thrust into the belly of rural India is as relatable today as it was wh...
READ MORE

It's an excellent book, a pure delight, the kind of writing we don't see too much these days.

Ironically, I first read about it on the back page of 'Five Point Someone', where a reviewer had called Chetan Bhagat's novel a modern take on this classic.Somehow I felt I should read it, and I haven't been disappointed. Read it for yourself to enjoy some good writing, and great characters!
READ MORE

One of the best reads

This book reinforces one's pride in Indian english. And i was amazed how much I loved the novel while i was re-reading it almost 6 years after i had first read it. Few novels have that disarming quality to engage at a higher plane.
READ MORE

English, August has always been my favourite book. Ever since I was introduced to the book some five years back, it has been my constant companion. Even during the days of 'reading block' when I couldn't find myself to read anything, this book always came to my rescue. It makes an amazing read and the humour stands out! Must, must read!

I gifted this book to a dear friend and how he loved it! I wanted it to be a birthday surprise and was doubtful if it would reach in time. But Kudos to Flipk...
READ MORE

Funniest novel written by an Indian in English

This is a classic fish-out-of-water comic novel. After I read it- and I never wanted it to get over- I desperately wanted to go to a small hot town like Madna but also never wanted to leave Bombay. Madna is the opposite of Malgudi. Just as eternal and fatalistic, but in a filthy kind of a way. Signs of modern progress? There are video stores in the unlikeliest of places offering a wide spectrum of Western delights from Amadeus to ‘blue films’. This is a stoner novel in the best sense of the w...
READ MORE

This is one of BEST books that I have ever read. The writing is amazing and the humour is excellent(though dark). I was fortunate enough to have watched the movie when it was telecasted on DD many years back. It was directed by Dev Benegal and Rahul bose rocked as August.
I have read and re-read this book many times over and still it makes me laugh at August's interesting & stark observations throughout the book.

Highly recommended. You won't put it down.
READ MORE

This is one book which CAN NOT be missed if you are looking for genuine dark humor....Upamanyua Chatterjee's best work till date...a brilliant satire on Indian Administrative System.. as good as it gets!
READ MORE

One of the best Indian books by a first time author.

It surprises me to no end that not many people know about this gem of a book.

The writing style is so fresh and simple ,yet so endearing couldn't didn't want the book to finish and that for me is always an indicator of a good book.

A must read for sure.
READ MORE

0
0
Permalink
Report Abuse
+
All 33 reviews
Have doubts regarding this product?
Safe and Secure Payments.Easy returns.100% Authentic products.
You might be interested in