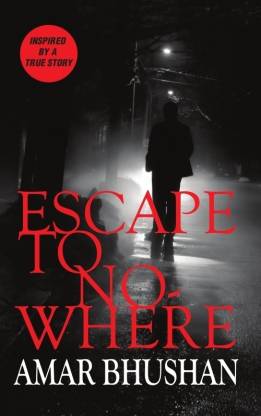 Amar Bhushan’s Escape To Nowhere is an espionage novel inspired by real events, and presents a thrilling insider account of India’s Intelligence agencies like RAW and IB, through the story of a top officer suspected of being a spy.

Escape To Nowhere is loosely based on a true incident, which was in the news in 2004, surrounding the disappearance of a high ranked intelligence officer, after being suspected of espionage against the country.

Written from an insider’s perspective, with the author having been a former head of the counter espionage department of RAW, the book reveals the inner workings of our nation’s intelligence agencies, giving the readers rare insights on their operations and functioning in the event of such an incident taking place, being perceived as a potential threat to the national security of the country.

Escape To Nowhere narrates a hard hitting account of the events that take place when a whistleblower expresses his concerns over a fellow senior officer’s suspected involvement in espionage. From the moment he confides his suspicions to the agency’s Head of security division, Jeevnathan, a departmental inquiry is propelled into action, with the suspected Officer, Ravi being brought under the tight scanner of an elaborately planned covert internal surveillance strategy.

As the investigation probes deeper, irrefutable evidence against the suspect comes to light, pointing to his being found guilty of stealing highly classified data. For the Agency, this throws open a sea of hard debates and decisions regarding handling of the situation. As they ponder over getting him to confess through the use of physical force, or letting him walk away free, the Chief of the agency is pressured for an appropriate response, and for Jeevnathan, it is a challenge to maintain peace in the department, and keep the watchers from getting off course.

The book, written like a diary, covers the entire operation, leading up to the defection of the suspected double agent. It bravely uncovers the challenges faced, and the frustrations of running an intelligence team despite lack of support and direction from the higher ups in the system. It exposes certain harsh truths including rampant red tapism, constant clash of interests between the bureaucrats or the ‘babus’ and the field operatives, failing to liaison with each other, a casual approach to national security, and difficulties in coordinating information from different branches of intelligence, as well as the situation in Kashmir.

He has enjoyed a long and eventful career spanning close to forty years, engaging in various streams of investigation, intelligence, and policing, and retiring in 2005, from the Cabinet Secretariat after serving as Special Secretary. Known for being passionate for lost causes, disliking stereotypes, and being bold, experimental, and dissentful in his approach, he was regarded as somewhat of an outsider in the department. He is settled in Jasidih, a quiet village in Jharkhand, India.

absolutely amazing and thrilling account OF THE GREATEST DEFECTION that shook the indian intelligence R&AW.written by the czar of counter intelligence of that time it gives an elaborate account of What,When and How the entire episode took place.perfect material to be a classic spy movie..
READ MORE

Escape to Nowhere by Amar Bhushan is a fictionalised account of the incident of Rabinder Singh. The author has presented his side of the incident. It is a well written account. It contains incidents that will make your heart happy, sad , flutter.

The book does give a small peek into the lives of people who put the country first as well those like the suspect who continuously feels that he is being monitored. Even the suspect cannot escape his own conscious feeling of doing a wrong thing!

Really a true story.I appreciate the guts of honest,outspoken and adventurous ''KAK''
God bless my country.I WISH THE DEPARTMENT RECRUITS PEOPLE LIKE ''KAK'' AND ALL THOSE WHO HAVE BEEN INSTRUMENTAL IN MAKING THE OPERATION A GREAT SUCCESS.JAI HIND.HATS OFF TO Sh.AMAR BUSHAN.
READ MORE

Just finished the book and having mixed feeling about it. The subject is exiting and shows real face of Indian leaderships casual approach towards national security. It seems Publisher have just published the Manuscript as submitted by the author. There is any hardly any Editorial effort visible in the book. Biggest help a good editor could have done is to make book shorter and crisp. At many places book moves very slowly, becomes predictable and repetitive. And suddenly events move very fast...
READ MORE

The book is Ok. Little self adulatory and not as gripping as spy thrillers ought to be. But the worst part is the astounding no. of spelling errors and bad grammar throughout the book. almost felt like a pirated edition. Surely the publishers should have had it proofread ...it spoils the intensity and is almost unintentionally comic at times.
READ MORE

The author who was a Special Secretary in the Cabinet Secretariat was in charge of Counter Intelligence and it was under him a counter intelligence operation was launched and the suspect kept under surveillance. Admittedly there was a lapse on the part of the watchers allowing the suspect to slip out of India. Interestingly, no heads rolled as a result of this episode. About eight years after the defection of this officer to the US, the author has chosen to write a book in the form of a novel...
READ MORE

The author writes in a very ameturish way and does not miss any opportunity to heap praise on himself. As for the story, it could have been presented in a very engaging way, but it was very boring. The only reason i finished this book was because i wanted to get an insight into the workings of our intelligence agencies, but the book dissappointed me there too.
READ MORE

An inside view of the agency

It would have been a tight rope walk to write this book given the sensitivity of the subject matter and the emphasis on adherence to law. The book gives an inside view of how the agency works and how one needs knack more than process to get the work done. The IB and RAW are the unsung heroes who are preventing major attacks and infiltration in our country despite so many constraints, one can only hope they are strengthened with every possible means and they continue shielding the country from...
READ MORE

Written in great detail. It's a pity the bird jumped the coop
READ MORE

The subject chosen was very interesting. It gave an insight how the agency takes up counter espionage activities. However I feel the writer has written an account of self adulation. Other thing I felt was some sections were repetitive. It was not a fast paced spy thriller.
READ MORE