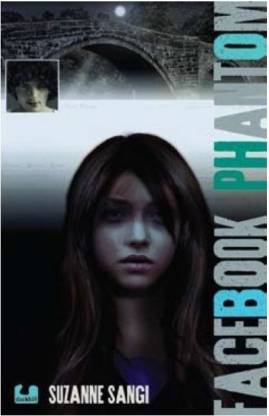 Facebook Phantom is a fantasy fiction about an adolescent girl who turns to the immensely popular social networking site to while away her time. The book has been written by Suzanne Sangi and was published in 2013.

The story begins with setting the stage and introducing the lead characters. Sonali Machado, the protagonist, finds herself bored with ample time available to indulge in anything. She has just finished her 10th board exams and is idling away the long break. She decides to spend more time on Facebook as a way to kill time and meets a mysterious stranger, Omi Daan, online.

Gradually, as she begins chatting and spending more time with him online, Sonali is unwittingly drawn into a dark world. She becomes distant from her two best friends, Neel Sarathy and Joanne Leslie, and her family. Neel, upon noticing Sonali's near obsession with Omi Daan, decides to find out more about the little known stranger. Thus, begins the journey of the teenagers into a dark, creepy world fraught with danger, intrigue and death.

Facebook Phantom is a refreshing take on the fantasy genre. It is meant for teens and young adults and employs contemporary tools and dialogues that makes the story realistic. The narration is divided into two parts. The first part is told through Sonali's point of view and the latter is Neel's version of the events that follow. As the story progresses, unsettling details about Omi Daan come to the surface. What had started as a harmless friendship on Facebook, turns into a dangerous game with deadly consequences. The character of Omi Daan, with his relentless will to get what he wants, is meant to spook the readers

The plot of Facebook Phantom is interesting and well crafted. The story is fast paced and maintains the tempo throughout. The paranormal element is meant to thrill and chill the readers. Facebook Phantom is a light read and yet forces the readers to ponder upon the use of social networking sites. The horror scenes in the book are well executed and the life and interests of teenagers are accurately depicted.

Suzanne Sangi is a debut novelist.

Suzanne Sangi currently lives in Bangalore and is a student at Mount Carmel College. She likes singing and also loves to play guitar.

Not so good
READ MORE