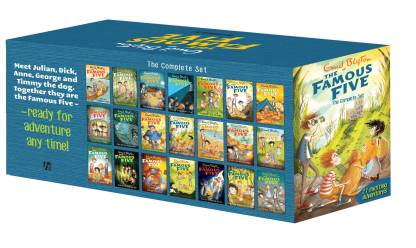 Famous Five Complete Boxset (Set Of 21 Books) contains all the adventures of The Famous Five. This set is the perfect gift for children.

Famous Five Complete Boxset (Set Of 21 Books) is a collection of twenty one novels that complete The Famous Five series.

The Famous Five is a group of children who go on various adventures, and help catch criminals. The leader of this group is Julian, a 12 year old boy who is kind, intelligent, and responsible. His brother Dick, 11, is funny and kind. They have a sister Anne, who is 10, and the youngest in the group. Georgina, who insists on being called George, is a cousin of these siblings. She is a tomboy, and has a loyal and loving dog named Timmy.

One of the books in Famous Five Complete Boxset (Set Of 21 Books) is Five on a Treasure Island. It was published in 1942, and shows how the Five try to find a treasure that has disappeared from a shipwreck. In Five Get Into A Fix, the kids enjoy their holidays in the snow, but then see a haunted face from an abandoned house. In Five Are Together Again, the kids enjoy camping at a scientist’s backyard, when a thief comes in and steals top secret research papers. The Five, for one last time, try to crack open the case.

The other books in this boxset include Five Go To Demon Rocks, Go To Mystery Moor, Five Go Off To Camp, Five Go off in A Caravan, and Five Run Away Together.

By the end of 1953, The Famous Five stories had sold over 6 million copies. It is one of the highest selling children's series ever. Even now, two million books are sold annually, taking the number to more than a hundred million books in total. The author had initially planned to write six to eight stories in the series. However, the spectacular success of The Famous Five, encouraged her to write twenty one books.

Enid Blyton, born in 1897, was an English author. She sometimes wrote under the pseudonym Mary Pollock.

She is said to have written approximately eight hundred books, including Book of Brownies, Child Whispers, and The Enchanted Wood.

The author joined the National Froebel Union teacher training course at the Ipswich school in 1916, after which she joined the Bickley Park School as a teacher. In the 1920s, Blyton’s works started to get published in Teacher's World, The Londoner, and The Bystander. Her books have been translated into ninety languages, and have sold over 600 million copies. She passed away in 1968. Blyton was voted Britain's best loved author at the 2008 Costa Book Awards. She was on the list of Top Ten authors, and was voted as the most popular writer by 10,000 children in 1982.

Good set of books for Kids

Purchased for my daughter and she is with it always. Good list of books for the price and every knows how famous the Famous five is. Quality of the package and the originality are the best, as usual from Flipkart.
READ MORE

The books, the box everything is in excellent shape. I got it at 1600. I simply can't stop swooning over it. The best thing about flipkart, they deliver days before the actual delivery date. Iam an adult but these Enid Blyton books hold a lot of nostalgia in them that these are not just for children. Thank u flipkart.
READ MORE

good set of value for money...delivered on time...had a very good experience with first dealing with flipcart...I expect more such offers in coming days, which casts astonishingly high in retail market...
READ MORE

Packaging is excellent. And the books are awesome. Got it at just Rs 1583...a whooping 50 percent discount.It had always been my dream to own the series and now Flipkart has made that possible. The inner box is in good condition and so are the books. The pages are of good quality. And a very fast delivery. Thankyou Flipkart.
READ MORE

i love the adventures they get into and it is best for children under 15 years i did not want to order all the books single so i ordered it and it was a complete hit!!


Good books really good . Delivered on time.i appreciate the creativity in them . I love the adventures they get into overall worth buying and if you are worried about the story its really fun and adventurous.
READ MORE

The thing that I like about flipkart is the packaging. I liked the books and would recommend you to buy it.
READ MORE

Awesome books.. Good delivery by Flipkart.. Packaging was very well done but the plastic seal of the box set was torn (seller had put the invoice in it). No damage to the items. Good job
READ MORE