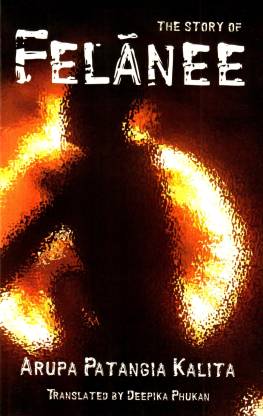 Felanee is a story of courage, of survival, of ethic conflict and violence that tears people and communities apart in the most brutal, savage way. Set in Assam, which has seen two major agitations that have crippled the economy, this is a story that will shock the reader in its sheer passion, and its brutal honesty. The callousness and utter disregard for human life, the ugly play for power, for electoral gain, the sham and petty hypocrisies, the bloody horror of ethnic violence all lie exposed in this powerful novel written by one of Assam's leading fiction writers. The story revolves around the experiences of one woman, Felanee. Her name means 'thrown away'— so called because as her mother lay dying in the burning riot torn village, she was thrown into a swamp by rioters and left to die. But against all odds, Felanee — and thousands like her — survived. Like the reeds that grow in such profusion along the bank of Assam's many rivers,the rootless inhabitants of the refugee camps and makeshift shanties, whose stories form the core of Felanee, are swept along by the wind and thrownonto new hostile terrain but they cling on withtenacity.

About the Author
Arupa KaIlta Patangla is one of Assam's leading, award-winning novelists. She has more than ten novels (including Dawn, published by Zubaan in English) and short story collections to her credit. She teaches English at Tangla College, Assam.

Deepika Phukan's published works include Moments, an English translation of a collection of classic Assamese stories, and The Plum Tree, a collection of her own short stories written in English. She lives in Guwahati.